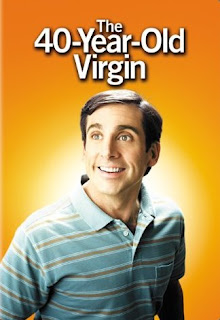 The 40 Year Old Virgin was the movie that made Steve Carell a household name and that launched director Judd Apatow into the stratosphere of .  It is a well liked movie with an easy to explain concept (it’s right in the title), so word of mouth for the movie was huge.  Even though it uses some of the oldest clichés in the book, the talented cast manages to make them seem fresh.
You should know upfront that unlike some people, I do not worship at the .  He followed this movie with a string of marginally entertaining films, yet went absolutely nuts over him.  A major entertainment magazine (that shall remain nameless to avoid ridicule) actually listed him as the most powerful man in .  Yeah, right.  Picture this scenario:  “Sorry Mr. Spielberg, Megastudios is going to have to cancel our meeting with you to discuss your new movie because we’ve got a chance to talk with Judd Apatow instead.”
I say all of this so that you will know I am not just one of his fans gushing over whatever his latest project is.  The 40 Year Old Virgin is actually a very funny movie.
Of course, with a cast that includes Steve Carell, Catherine Keener, Paul Rudd, Seth Rogen, Elizabeth Banks, Leslie Mann, Jane Lynch, Kat Dennings, Jonah Hill, Mindy Kaling, Mo Collins, and David Koechner it’s pretty easy to generate laughs.  Even though Apatow and Carell co-wrote the movie, many of the scenes ended up being adlibbed by the cast.
As I mentioned earlier, the premise is right in the title.  Steve Carell plays Andy, the clichéd nerd/virgin who owns action figures and who works in an electronics store.  One night while paying poker with his friends, they start swapping stories about their first time having sex.  When Andy tells an obviously made up story, the others pressure him into revealing that he’s actually never had sex.  This gives them their mission in life: to get Andy laid.
Of course, the advice from all of them on women is pretty bad.  They also all contradict each other.  The most talked about scene involved them taking Andy in to get some “manscaping” done.  This scene where Andy has his chest hair removed by waxing was real.  Carell insisted that the only way to film it was to have him actually having his chest waxed and reacting to the pain as it happens.  They obviously could only film it once.  If you watch the woman doing the waxing, you can tell she’s breaking up in several of the moments of the scene.
You may be thinking “why doesn’t he just hire a prostitute?”  Well, his friends do hire one for him, with disastrous results.  As it turns out, a prostitute is not needed.  From what we learn in this movie there are apparently all kinds of gorgeous women who want to have sex with a 40 year old nerd who looks like Steve Carell.  All that has to happen is for the guy to put himself out there and take some chances.
Elizabeth Banks provides some laughs as a bookstore clerk who becomes intrigued by Andy when he uses the technique of just making all his comments questions, which makes him sort of a mystery man.  Banks was actually doing double duty.  While filming this movie, she was also filming the Nathan Fillion horror comedy Slither.  Check it out when you get a chance.  There are some good laughs in that, too.
Andy finally meets a great woman (Catherine Keener) who owns a store where she sells people’s stuff on EBay for them.  She tries to convince Andy to give up his action figure collection.  Despite this they start dating, but agree to not have sex until the twentieth date.  This leads to complications, especially with Banks’ character still interested in him.  While all this is going on there are subplots with Andy’s friends and co-workers that also provide some humor.
This film is really Steve Carell’s.  It could have been really stupid, but he imbues his character with a sweetness that makes him more human and less a character cliché.  His scenes with Catherine Keener are the best parts of the movie.  He had gotten some notice on The Daily Show and in smaller roles in the movies Bruce Almighty (2003) and Anchorman (2004), but this was the movie that made him a star.  It caused his TV show The Office to become very popular and he has worked constantly in movies ever since.
Unless you are offended by raunchy humor, I recommend you give this movie a try.  I think it will give you some good laughs.
Chip’s Rating: 3 out of 5 stars
[Note – you can see all the Movies by Numbers, as well as get some hints on what’s to come, at this link.]