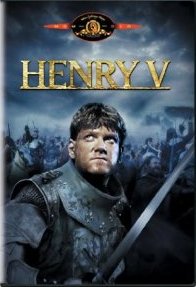 In adapting, directing, and starring in Shakespeare’s Henry V, Kenneth Branagh stepped right into the shoes of Laurence Olivier, one of the all time greatest actors.  Olivier had done this in 1944 for his directorial debut and now 45 years later Branagh was doing the same.  Both would go on to adapt, direct, and star in Hamlet a few years later, as well as other Shakespearean plays.  The general consensus on the two Henry Vs was that Olivier had Branagh beaten at acting, but that Branagh had directed a superior movie.
Henry V takes place during the 100 Years War between and .  Henry is the King of England.  There is some potential for him to claim ownership of French lands because does not have a male heir.  He checks with the clergy, and they basically tell him that it’s all good.  God wants him to claim those lands, and incidentally bring a whole lot of money back to the Church.
Naturally, King Charles VI of disagrees with this interpretation and Henry has to fight his way across to claim the lands.  The French are better armed and outnumber him.  After many clashes his men are beaten down and the knowledge of yet another upcoming battle against superior numbers weighs heavily on them.  What follows is one of the all-time greatest speeches ever written – the St. Crispin’s Day speech.


If you have sharp eyes you saw a 14 year old Christian Bale at 2:13.  Also in the movie are a host of familiar faces – Derek Jacobi, Brian Blessed, Ian Holm, Robbie Coltrane, Academy Award winner Paul Scofield, and future Academy Award winners Judi Dench and Emma Thompson (Branagh’s wife at the time.)
You saw in the video some of the freshness that Branagh brought to the story.  He did not film it like it was a stage play.  He moved around, moved the camera, and had wide sweeping views of battlefields.  He also had Derek Jacobi playing a one man Greek chorus, breaking the fourth wall and at one point breaking down the confining walls of the stage.
Branagh received Academy Award nominations for both directing and acting.  He lost to Oliver Stone, who directed Born on the Fourth of July [you can read my review of it here], and like Tom Cruise in that same movie, Branagh lost to Daniel Day-Lewis’ incredible performance in My Left Foot (1989.)
Some people avoid Shakespeare because they were made to read it in high school and all those old words made it a lot harder to get through.  As you can see from the video above, when you actually put visuals with those words, their meaning becomes quite clear.  This is not a movie to be avoided; it is a movie to be sought out and watched.
I highly recommend this film.
Chip’s Rating: 4 out of 5 stars
[Note – you can see all the Movies by Numbers, as well as get some hints on what’s to come, at this link.]
DVD                    Paperback                    Kindle

Email ThisBlogThis!Share to TwitterShare to FacebookShare to Pinterest
Labels: Movies, Movies – 1980s, Movies – 4 Stars, Movies – Based on Book, Movies – By the Numbers