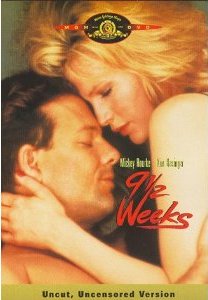 The movie 9 ½ Weeks created quite a stir when it came out in 1986.  It was based on Elizabeth McNeill’s book of the same name that chronicled a very intense nine and a half week relationship she had with a man who completely took over her life.  After the relationship ended she wrote the book either based on her diaries, or written in a way to appear to be almost in diary form.  I will be discussing both the movie and the book in this post.
The movie stars Mickey Rourke and Kim Basinger when they were both young and beautiful.  People that only know Mickey Rourke from his current appearances in Iron Man 2 (2010) or The Wrestler (2008) will be quite surprised to see what he looked like before a boxing career and 25 years rearranged his face.
The movie pushed a lot of buttons when it came out because it chronicled a relationship in which a woman gave total control of her non-work life over to a man who remained almost a stranger to her.  He did everything for her.  He cooked for her, he cleaned, he bathed her, he washed her hair.  She literally did nothing.  In return he asked her to give herself to him body and soul.  She did.
The movie has several foreplay scenes and a few sex scenes in it.  As intense as the movie got, it still held back far more than the book did.  In the movie the relationship is him being dominant and her being submissive, but it is not a sadomasochistic one.  They actually toned the movie down from the book.  In the book the author is quite frank about how she willingly went along with everything he wanted, including S/M.  The movie has a scene where it shows the two shopping for a riding crop.  Its use in the movie is completely different from what the viewer is led to assume, though.  In the book, it is used for exactly what you figure two S/M participants would use it for.
The movie was directed by Adrian Lyne.  He doesn’t direct many movies, but when he does they touch a nerve with a large number of people.  Aside from this one, he also directed Foxes (1980), Flashdance (1983), Fatal Attraction (1987), Jacob’s Ladder (1990), Indecent Proposal (1993), Lolita (1997), and Unfaithful (2002).  He does an excellent job casting his movies.  He has worked with numerous future Oscar nominees and winners early in their careers such as Jodie Foster, Glenn Close, Anne Archer, Tim Robbins, Woody Harrelson, Frank Langella, and Diane Lane.  He also worked with previous Oscar nominees/winners Melanie Griffith, Robert Redford, Jeremy Irons, and Michael Douglas.  Bringing it back to 9 ½ weeks – Mickey Rourke would go on to get nominated for 2008’s The Wrestler (and he should have won), while Basinger went on to win an Oscar for her performance in L.A. Confidential (1997).
When 9 ½ Weeks was first released there had been some cuts made to it.  This included the single most important scene in the movie.  These scenes were restored for the VHS release.  This was an early example of the home video audience being able to see the correct version of the movie, not the MPAA’s censored version.  The scene is the one where the relationship changes from being fun and exciting, to being one that is about emotional pain and humiliation.  It’s the beginning of the end of the relationship.  And the thing is – it’s not a sex scene, nor is there even any nudity.  Why it had to be cut to get by the MPAA is a complete mystery to me.
In the book the woman just finally has an emotional breakdown that ends things.  She makes clear in the book that she doesn’t regret the relationship one bit, though.  In the movie it’s not cut and dried whether the woman feels she made a mistake or not.  Once again, this tones it down some from the book.  The movie is also more about the woman “taking back the power”.
I might as well address the elephant in the room:  Is this movie pornographic?  Not remotely.  I would certainly characterize the scenes early in the relationship as being well done and quite erotic.  Eroticism and pornography are two vastly different things, though.  In fact, they are pretty much the opposite of each other.  Those scenes had quite an impact on people.  While it was nowhere near the number of couples recreating the “I’m flying” scene from Titanic, quite a few couples recreated scenes from 9 ½ Weeks - most commonly the refrigerator scene.  Food as part of foreplay took on its own life for a while in the late 1980s.
As is usually the case, the book is better than the movie, but that is more due to the storyline than anything else.  Rourke does a fine job of being the cipher that Basinger’s character just can’t figure out.  This is a great example of the imbalance in the relationship because Rourke’s character can read her like a book.  At one point she asks him, “How did you know that I would respond in this way?”  It’s a fair question because in the “real” world she is a high powered executive with an important job, but when she leaves work and comes to his apartment all of that melts away and she simply becomes his.
Unless you get uncomfortable with human sexuality, give this movie a try.  You may be surprised by a couple of early performances from two future Oscar contenders.  If you want to get the real story that even the movie couldn’t show you, then pick up the book.  Depending on what works for you and what doesn’t you may either need a glass of ice water to sip while reading or you may find it to be something far beyond anything you might have imagined.
Chip’s Rating: 3 out of 5 stars
[Note – you can see all the Movies by Numbers, as well as get some hints on what’s to come, at this link.]