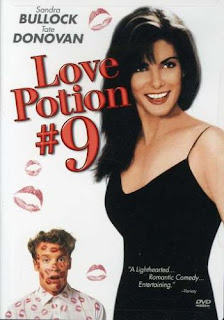 I often see the term “guilty pleasure” used when someone is worried that people will think badly of them for liking something.  I’ve never really understood this.  If I like something, then I like it.  I don’t feel guilty about liking it just because others don’t.  I don’t believe this makes me insensitive.  To me, it’s just being comfortable with who I am and what I like.  What does any of this have to do with the film Love Potion #9?  Well, this is precisely the kind of movie that I have seen others describe as a guilty pleasure.

In reading the comments on IMDB the two most common words used to describe this movie are “cute” and “fun”.  And yes, “guilty pleasure” is used a few times, too.

The movie is loosely based on the 1959 song of the same name.  Tate Donovan and Sandra Bullock play nerdy scientists.  It’s ’s version of nerdy, so that mostly means bad hair, bad clothes, glasses, and some science talk.  It’s obvious from the beginning that they are perfect for each other, but don’t realize it.

He gets together with Bullock’s character and they first test it on chimps, then themselves.  It turns out that the potion makes a person irresistible to anyone of the opposite sex who hears them speak.  Both he and Bullock start using it some in their regular lives.

There’s a great scene where he gets revenge on a rude woman who had insultingly turned him down early in the movie.  He walks up to her under the effects of the potion and speaks to her.  She immediately tries to pick him up.  He then uses the same kind of putdown on her that she used on him.  The scene is fun because from the moment you see the woman you know exactly what is going to happen and you get to watch it play out.  It’s also fun because most every guy has at some point had his hopes rudely squashed by someone he wants to meet.

Bullock’s character, in the meantime, has been using the potion to move up to better and better boyfriends.  Among them is Dylan Baker playing a prince.  Of course, she also gets her hair fixed, loses the glasses, and starts dressing great, all of which results in her becoming a gorgeous woman.

Donovan’s character, in the meantime, hasn’t been having it so well.  He feels something is missing and finally realizes what that is when he finds out Bullock’s character is inexplicably going to be getting married to a jerk.  Can he save her from what’s going on and win the love of his life?  Well, I will tell you this much:  Donovan and Bullock got engaged in real life after doing this movie together.

This was the first movie I ever saw Sandra Bullock in, so when she was transformed on screen it did make quite an impact on me since I had no idea how beautiful she was.  I could also see the screen presence and likeability that became such a part of her appeal.  A few years later that appeal led to her becoming a household name for such movies as Speed (1994) and While You Were Sleeping (1995).

Tate Donovan I had already seen in Spacecamp (1986).  He has worked continuously since doing Love Potion #9, but he never became as big a star as Bullock.  In addition to Bullock, he also ended up being engaged to Jennifer Aniston for a few years, so don’t feel too bad for him.

Love Potion #9 is the kind of movie that you should just pop some popcorn, sit down, and enjoy.  If you over think things, it will ruin the movie.  If you are looking for a fun movie then give this one a try.