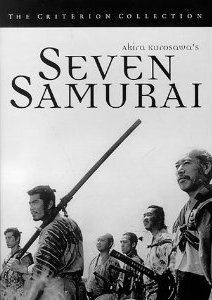 What can be said about Akira Kurosawa’s film Seven Samurai that has not already been said before?  I stalled over this review for a few days because I knew that a movie that has been the subject of any number of learned papers has likely had every minute of it dissected at some point.  I then remembered that my goal is not to provide movie criticism, but to communicate information to people on why they may want to see a movie I am recommending.  To that end I will say that the best reason for you to see Seven Samurai is, quite simply, that it is the greatest non-English language movie ever made.

How great is it?  It’s so great that even its American remake is considered a classic (1960’s The Magnificent Seven.)  If you look up “epic” in the dictionary there should be a reference to Seven Samurai.  It makes pretty much every critic’s “best of” lists.

Among the websites that track preferences, Rotten Tomatoes has the movie at 100% fresh among critics and 96% fresh among audiences.  IMDB has it as the #13 movie of all time.  The only reason it’s not higher than that is the fact that IMDB gives better rankings to movies that get more votes, so you end up with skewed lists where popular movies like The Dark Knight (#9) and Inception (#11) end up being ranked higher because hundreds of thousands more people voted on them.

Seven Samurai opens in 16th century .  Bandits approach a village, but decide not to raid it yet.  They will come back in a few months when the food has been grown and harvested.  One of the farmers overhears them and alerts his village.  They decide to hire samurai to come protect their village from the bandits.  They are very poor so they won’t be able to do much more than give the samurai food, though.

Some villagers go to the city, but keep getting rejected by all the samurai they approach.  These samurai look down on the poor farmers and reject them outright when they find they will not get paid.  While losing hope the farmers witness an older samurai cleverly save a boy who has been taken hostage.  This man is played by Takashi Shimura, who was so great in Kurosawa’s earlier film Ikiru (1952).

They approach him and he accepts their offer, partially because he has lived a long life already and partially because his master has released him from service.  He is a ronin now – a samurai who serves no master.  There are other ronin like him in the city and he helps the farmers recruit five more, each with their own set of skills.

The youngest of them joins because he wants to learn as an apprentice to the aged samurai, but instead is taken in as an equal.  There was one samurai who wanted to join them, though, but was rejected by the others.  He was too boastful and did not act like a samurai should.  He ends up following the others back to the village anyway.  This character is played by the great Toshiro Mifune.  Just as director Martin Scorcese had actor Robert Deniro, director Akira Kurosawa had actor Toshiro Mifune for many of his films.

When the samurai arrive at the village they are treated badly.  The stupid farmers have hidden away in fear of them.  They have sent their women away fearing the “lustful” advances of the samurai.  Just then Mifune’s character raises a false alarm, the villagers rush out begging the samurai to protect them, and he then berates them for expecting protection after their terrible greeting.  This shows the other samurai that he is more than the boastful clown he acts like; he actually has some brains.  They finally accept him as one of them - a seventh samurai.

Just like the samurai in the city who refused to come, these samurai also look down on the farmers as cowards and lower class.  This time Mifune’s character helps the other samurai understand things from the farmers’ perspective.  In doing so, he inadvertently reveals his own origins, and why he has seemed to be overcompensating all the time, including having the world’s longest samurai sword. (Now there’s some symbolism for you.)

The older samurai has become the natural leader of the others.  He organizes the farmers, gets them building fortifications, and plans to defend the village.  While all this is going on the youngest samurai has discovered that the daughter of one of the villagers has been disguised as a boy – once again to protect her from the imagined lusts of the samurai.  They start to kindle a romance and needless to say her father is none too happy about it.  It was already a forbidden romance because he was a samurai and she was a farmer – two class structures that do not mix, but now that her father disapproves that just makes it even hotter for the two of them.

When the bandits arrive back at the village, they are very angry with what they find.  They decide to wipe this village, and their hired samurai, off the map.  What follows are a number of great action sequences.

Seven Samurai has sometimes been called the first modern action movie.  Whether it was or was not, it definitely was hugely influential on many action movies that came later.  You know the shot in many movies where the enemy’s army appears over a hill?  That was done first in this film.  Some people constantly complain about Zack Snyder’s use of slow motion.  Well, Seven Samurai was one of the first to ever do this to enhance an action scene – twelve years before Snyder was born.  The film also has character archetypes such as the reluctant hero, the rogue character who’s on the good guys’ side, the aged, knowledgeable warrior, the young man excited about his first battle, etc.  (Gee, sounds a little like Star Wars, doesn’t it?)  While other movies had done these things before, Kurosawa was the first to bring them all together in a huge, truly epic way.

Also in true epic fashion, don’t expect every single hero to make it through to the end of the movie.  The bandits have larger numbers and they also have a powerful weapon – a musket.  You could write a whole other post on how this movie presents a last hurrah or last stand for the samurai culture as a whole since the coming use of guns would soon make them obsolete.

Aside from the foreign language, the other thing that has kept some people from seeing this great film is that it is quite long.  My answer to that is that so are many other, very popular movies.  It’s basically the same length as The Lord of the Rings movies, Titanic, and many others.  I have watched Seven Samurai multiple times and at no point did I ever look at the time to see how much was left.  It kept me engaged and it seemed like the film just moved right along.

If you pick up the Criterion version of the film, make sure to listen to the commentary track, too.  The person doing it was very well prepared and communicates a ton of good information.

This is one of the few movies that everybody should see at least once in their life.  I give it my highest recommendation.