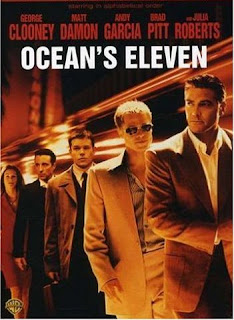 The 2001 Ocean’s Eleven film was a remake of the 1960 Frank Sinatra movie of the same name.  I have not seen the original, so I do not know how the two films compare.  In general, the stories both inside and outside the movie are the same – a star (Frank Sinatra/George Clooney) got together with some pals and made movies about casino heists.  Some people love gangster movies; I love heist movies, even ones that are B movies.  In this case, the movie is A-list all the way.
First, it is directed by Steven Soderbergh coming off his double Best Directing Oscar nominations and win the prior year.  Second, it stars George Clooney (4 Oscar noms, one win), Brad Pitt (2 Oscar noms), Matt Damon (3 Oscar noms, one win), Don Cheadle (1 Oscar nom), Elliot Gould (1 Oscar nom), Carl Reiner, Bernie Mac, Casey Affleck (1 Oscar nom), Scott Caan, Eddie Jemison, and Shaobo Qin as the “eleven” in the title.  It also stars Julia Roberts (3 Oscar noms, one win) - fresh off her Oscar in Soderbergh’s Erin Brockovich - as Ocean’s former wife, and Andy Garcia (1 Oscar nom) as the mark.  Other than movies with cameos, like 1992’s The Player, or the Ocean sequels, this might be the most nominated cast in history.
There was a little bit of squabbling over billing.  Julie Roberts was given an “and introducing” credit, which is usually only done for the first big role for someone.  Don Cheadle ended up taking his name out of the credits.  Both came back for the sequel, though, so they couldn’t have been too upset.
There are also cameos by some of the original cast of the 1960 movie and by some young stars of 2001.  There’s a fun scene where Brad Pitt’s character is teaching poker to celebs such as Topher Grace, Joshua Jackson, and Holly Marie Combs (all playing themselves.)  When everyone leaves the club it shows fans and paparazzi mobbing those three, while Brad Pitt and George Clooney walk away unnoticed.
The basic setup for the film is that (Clooney) has just been released from prison.  While he was in prison he came up with a way to get back at Andy Garcia’s character for stealing Ocean’s wife.  Garcia’s character owns three casinos in and Ocean plans to break into the common vault for all three and steal the money from it.  He gathers together some old partners (i.e. Pitt), who then bring in other players as the plan gets bigger.  Eventually they end up with 10 co-conspirators from people who will finance the plan (Gould), to old con men (Reiner), to tech people (Cheadle, Jemison), to a tiny acrobat (Qin).  They figure they need one more person for a particular task, though.  They recruit Damon’s character to fill that need.  He’s a young, anxious guy who’s looking to prove himself and who hopes to be half as cool as Ocean.
Needless to say, not all goes according to plan.  Ocean hasn’t clued his partners in that he’s motivated by revenge more than greed.  Both his wife (Roberts) and Garcia’s character catch on that Ocean is there and they know he is up to something.  This puts Garcia’s character on even higher alert for anything suspicious.
The eventual heist is very well done and quite entertaining.  Some things had been held back even from the viewing audience, so there are some surprises.  There is a goof in the movie about one part of the heist, but it doesn’t really detract from the enjoyment.  To discuss what it is would be a spoiler, and besides, some people don’t even notice it.
The best way to describe this movie would be “fun”.  It is fun to watch and you can tell everyone had fun making it.  It was followed by two sequels, Ocean’s Twelve and Ocean’s Thirteen.  Neither is as good as the first, with Ocean’s Twelve being the weakest of the three.
There’s really no reason not to watch Ocean’s Eleven.  It’s got a likeable, talented cast and it’s got a fun, escapist story.  I highly recommend this film.
Chip’s Rating: 4 out of 5 stars
[Note – you can see all the Movies by Numbers, as well as get some hints on what’s to come, at this link.]