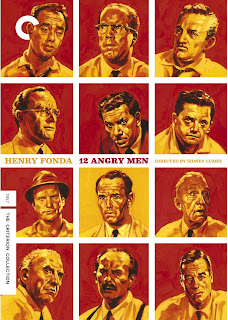 12 Angry Men is one of the all-time classic movies.  It features a number of excellent performances, an engaging, tension-filled story, and great cinematography – all within the confines of tiny jury deliberation room.  Henry Fonda was the star of the film and out of more than 100 movies he was in, he considered 12 Angry Men one of the three best films he ever made.

It is currently #6 on IMDB’s list of the Top 250 movies of all time.  As I discussed in my Seven Samurai post [you can read it here] IMDB gives higher rankings to movies that receive more votes, so for a film with relatively so few votes to be ranked so high is nothing short of remarkable.

12 Angry Men was the first film ever directed by Sidney Lumet and it was a hell of a start.  He would go on to direct such movies as Fail Safe (1964), Dog Day Afternoon (1974), Network (1975), and The Verdict (1982).  He received four Best Director Oscar nominations during his career and his first was for 12 Angry Men.

The movie opens with a jury leaving to deliberate on the verdict of a case.  You see one shot of the defendant – a young ethnic man.  Other than one short scene at the end, the entirety of the movie takes place in the jury room.

If you have never been on a jury, or are not familiar with the American court system, twelve citizens are picked to serve on a jury.  It’s every American’s civic duty to serve if selected.  Once on the jury you have to make your Guilty/Not Guilty decision based only on the evidence, not on any emotional reasons.  That’s the textbook rule; the reality is that people sometimes do make emotional decisions.  The most egregious of those are the ones that make the national and even international news.

This movie shows a number of the things that go on during a jury deliberation.  It looks to be an open and shut case of a young man stabbing his father to death.  He claims that he arrived to find his father dead, but multiple witnesses say he did it.  The jurors are tired and some of them just want to get the verdict over with and get home to their families.  They take the first vote and all but one of them votes Guilty.  The jurors must arrive at a unanimous decision, so this means they cannot leave.  It’s a secret vote, so this angers some of the other jurors and they demand to know who the one dissenter is.  Fonda’s character says that it was him.  He admits that he thinks the defendant is probably guilty, too, but that they have a duty to at least review the evidence before taking their vote.

Even though this isn’t popular, the others go along with it.  Each of them brings different experiences in their lives to the decision and you see things get very emotional.  Some of them bring up little questions that others didn’t have and when taken together start to make a few wonder if there isn’t more to the case than first appeared.  Some bring bad experiences in with them that make them predisposed to not like the defendant.  As the movie goes on, the tension and the emotions keep ratcheting up.  Lumet deliberately shot the film with the camera starting out further away from the jurors and as the movie goes on he moves it closer and closer to their faces to increase the sense of claustrophobia, tension, and battle of wills.  The result is that something that sounds quite boring – a jury deliberation – becomes almost edge of your seat entertainment.

The interactions of the characters, especially Fonda’s, Marshall’s, and Cobb’s, are incredible.  Balsam, Begley, and Klugman also hold their own among these titans.  Sweeney provides perhaps the most likable performance and there is a nice scene between his character and Fonda’s at the end of the movie.

The movie is so known for its acting that a 1997 made for TV remake had no trouble casting such notables as Jack Lemmon, George C. Scott, Hume Cronyn, Ossie Davis, Armin Mueller-Stahl, and Edward James Olmos.

12 Angry Men is very entertaining, contains a number of great acting performances, and has perhaps the greatest ensemble acting ever put on film.  It is a fascinating study into human nature, group dynamics, and the deliberation process.  It is truly a must see.  I give this film my highest recommendation.