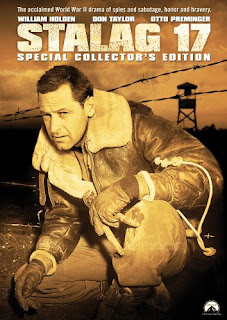 Stalag 17 is a comedy-drama directed by Billy Wilder and starring William Holden.  This was a re-teaming of the two men.  Their prior movie together was Sunset Boulevard (1950.)  Billy Wilder was a great director – one of the best ever.  I discussed his career in my review of Sunset Boulevard.  You can read it here.  Stalag 17 had more humor than Sunset Boulevard, but it also had a more serious subject: a World War II prisoner of war camp.  This isn’t a topic that would seem to lend itself to humor, but Wilder managed it.  He received an Oscar nomination for his direction of this movie.
Personally, I liked Life is Beautiful (1997), but the humor did not always work for me.  It sometimes seemed out of place in a concentration camp.  A POW camp is one step removed from that, though.  The prisoners will not be killed unless they try to escape, so humor does not seem quite as out of place.
William Holden is the big star in this movie.  He was in many great movies, among them Sunset Boulevard (1950), Born Yesterday (1950), Sabrina (1954), The Country Girl (1954), Picnic (1955), The Bridge on the River Kwai (1957), The Wild Bunch (1969), and Network (1976).  Out of all of these films he was nominated for an Oscar three times and the one win he had was for Stalag 17.  The ironic thing is that he didn’t even want to take the role because he felt the character was too selfish.  He was forced to do it by the studio.  He gave one of the shortest acceptance speeches in history.  It consisted of two words – “Thank you.”  It’s too bad more people don’t follow his example.
Holden plays Sergeant J.J. Sefton, a POW in Stalag 17.  It’s just before Christmas in 1944.  The camp holds over 600 prisoners – all sergeants.  There are dozens of men in his building and about 10 of them have major roles in the movie.  You will recognize some familiar faces among them, many from television.  These include Peter Graves from Mission Impossible (1967 – 1973) and Richard Erdman who is currently on Community (2009 – ).
Playing the camp’s commander Colonel von Scherbach was director Otto Preminger.  In addition to directing and producing he would also act from time to time.  These roles ranged from this movie to playing Mr. Freeze on the 1960s Batman TV show.  He will be best remembered as a director, though.  Among his movies are Laura (1944), Anatomy of a Murder (1959), and The Cardinal (1963).  He received Oscar nominations for all three.
The movie Stalag 17 opens with two prisoners starting their escape.  Sefton is the camp hustler.  He’s in on every deal, never met a trade he didn’t like, and he has no morals.  He bets the other men in the barracks that the two prisoners won’t even make it out of the forest.  All the others take that bet.  They hear machine gun fire and they know what has happened.  Sefton collects from everyone on the bet.  The next day the bodies of the escapees are laid out in the mud in front of the men as an example of what happens to those who try to escape.
Sefton ends up trading his winnings from the men to the Germans for an egg, which he proceeds to cook on the barracks stove.  If the others didn’t hate him already for betting on men losing their lives, the fact that he traded it in for an egg which he is cooking and eating right in front of them really pisses them off.  They grill him on just how he knew those men wouldn’t make it.  They start to put two and two together and realize that the Germans seem to know a lot about their plans.  Suspicion immediately falls on Sefton.
While all this is going on, there are a series of slapstick comedy scenes mixed in.  Most of the broad humor is provided by the two characters of “Animal” (Robert Strauss) and Shapiro (Harvey Lembeck.)  Some of their hijinks include trying to sneak into the prison camp next door that holds Russian women.  Strauss ended up with an Oscar nomination for Best Supporting Actor.
Much of the humor comes in the first half of the movie.  While the second half still has its funny moments it concentrates more on the drama as the tension in the barracks keeps rising.  The Germans keep finding out things and Sefton seems to have it easy because of his trading with them.  Things finally come to a head when the men beat up Sefton and steal a lot of his stash.  He didn’t care what anybody thought of him before this, but he realizes now that if he is going to survive he has to find out who the real informant is.
If you are thinking, “A German POW camp during WWII with humor as an element – that sounds like Hogan’s Heroes (1965 – 1971)” then you are not alone.  Throw in a camp commander who brags that he has a perfect record of no escapes, a German sergeant named Schultz who is big and jolly, and tunnels dug for escape routes then the parallels really come into focus.  The producers of Hogan’s Heroes ended up getting sued for plagiarism.  The case was settled out of court.  Hogan’s Heroes was very much a spoof, though.  The Germans were all idiots.  That is not how things are in Stalag 17.  For all his laughter, this Schultz has a lot more going on inside him.  The camp commander is also more chilling than Colonel Klink ever thought of being.
You may think that mixing humor into a plot about prisoners of war is going over the line.  If so, you may want to skip this movie.  For everyone else, I recommend you give this a try.
Chip’s Rating: 3 out of 5 stars
[Note – you can see all the Movies by Numbers, as well as get some hints on what’s to come, at this link.]
DVD