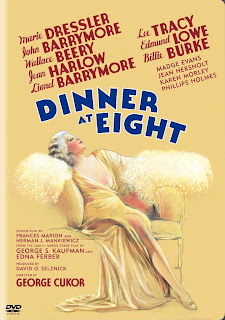 Dinner at Eight is a comedy of manners, with dramatic elements, among various well-to-do folks.  It was released at the height of the Great Depression.  You would think it would have been hated, but people watched it for the great escapism that it brought to them.  It allowed audiences to see the clothes, jewelry, homes, etc. that the rich had and live vicariously through them, but it also showed them that the rich had just as many problems as they had, if not more.  It’s a great character study and a bit of a time capsule for a kind of society that was on its last legs from the Depression.
In the early days of movies most of them had one big star with a cast of supporting actors and actresses.  Studios did not want to put all their eggs in one basket, so to speak.  They wanted audiences to pay to see several movies to be able to see their favorite stars.  That changed in 1932 when Grand Hotel was released.  It was the first “all star cast” movie and it won the Oscar for Best Picture.  Sensing a good thing, the studio released Dinner at Eight the next year, with its own superstar cast, some of whom had been in Grand Hotel.
Dinner at Eight stars Marie Dressler (Tillie’s Punctured Romance) as Grand Dame stage actress Carlotta Vance; Lionel Barrymore (Grand Hotel, You Can’t Take it With You, It’s a Wonderful Life) as shipping magnate Oliver Jordan; his brother (and Drew Barrymore’s grandfather) John Barrymore (Grand Hotel) as washed up silent movie star Larry Renault; Wallace Beery (The Champ, Grand Hotel) as mining magnate Dan Packard; Jean Harlow, whose life would be tragically cut short a few years later, as Dan’s gold-digging wife Kitty Packard; Edmund Lowe as Kitty’s doctor Wayne Talbot; Billie Burke (The Wizard of Oz) as Oliver’s wife Millicent Jordan; Madge Evans (David Copperfield) as Oliver and Millicent’s daughter Paula Jordan; Lee Tracy as Larry Renault’s agent Max Kane; and Jean Hersholt (Greed), the namesake for the Humanitarian Oscar award, as producer Jo Stengel.
Millicent finds out that a British Lord and Lady she and Oliver met are going to be coming to her latest society dinner.  All of the people named above end up there, or are intertwined with the invitees.  In fact, just about all of them have some connection with another invitee, whether clandestine or above board.  This is where the comedy comes in.
Millicent is oblivious to the fact that her husband and daughter aren’t as excited as she is.  Oliver has been hurt financially by the Depression and is having trouble staying afloat.  Paula is preoccupied with welcoming her fiancée home.
Oliver discusses his financial situation with Dan Packard.  Rather than feeling sympathetic, Dan sees a situation he can take advantage of.  Oliver convinces Millicent to invite the Packards to her dinner, and Dan’s wife Kitty, seeing a chance to do some social climbing, accepts.  Kitty’s doctor, Wayne Talbot, has also been invited.  He’s actually more than her doctor; he’s her lover, but her husband Dan is unaware of this.  He’s focused on the opportunity to score big from Oliver Jordan’s problems, and with the fact that he may soon be appointed to a Cabinet position.
Meanwhile, Millicent is worried about finding a man to pair off with actress and dowager Carlotta Vance.  Millicent ends up inviting washed up actor Larry Renault, who unbeknownst to her, has been carrying on an affair with her daughter Paula.  Paula convinces Larry to attend.  However, Larry advises her to give up on him; he is too old for her and she should go back to her fiancée and live a happy life.  Paula is seen leaving Larry’s hotel room by Carlotta, who is staying in the same hotel.
Larry has turned to drink since his downfall, and he soon finds out from his agent that his big comeback has just been squashed by the producer.  Instead he will be offered a much smaller part and the lead will be given to someone else.  This really sends him off the deep end.
All of this may sound complicated, but it is easier to follow on the screen.  That’s a good thing, since these are only the setups for the events that occur during the course of the movie as various secrets come out into the open, plots are revealed, and Millicent’s plans for her dinner keep encountering one problem after another.
By the way, don’t expect to actually see people eating dinner.  [No spoilers]  The last shot of the movie is the various guests walking out of the drawing room and into the dining room to sit down to their meal.  Despite the title “Dinner at Eight”, that’s not what the movie is about.  It’s about all the comedic, and sometimes tragic, connections people have with one another, even ones they are not aware of.  In this case, it’s a group of people invited to a society dinner.
Dinner at Eight was directed by George Cukor, who would go on to direct such films as The Philadelphia Story (1940), Born Yesterday (1950), and My Fair Lady (1964).  In all, he would receive five Oscar nominations for directing, winning once for My Fair Lady.
Cukor’s movie Dinner at Eight is a good combination of comedy and drama.  I highly recommend this film.
Chip’s Rating: 4 out of 5 stars
[Note – you can see all the Movies by Numbers, as well as get some hints on what’s to come, at this link.]