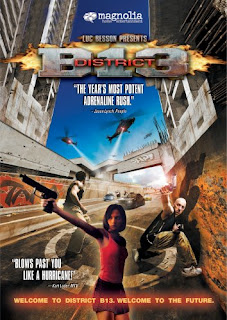 District B13 is an action film from .  Say “French action film” to most people and you will get a lot of confused stares.  The term doesn’t seem to make sense to them.  In fact, if you take away films that Luc Besson was involved in (as he was with District B13) then the only French action film I can remember seeing prior to this one was Brotherhood of the Wolf (2001).  Rest assured, there are no mimes, long sequences that make no sense, or any other bad cultural stereotypes you may have about French films.  This is a kick ass sci-fi action film with a French accent and that accent is parkour.
Luc Besson (La Femme Nikita, Leon: The Professional) co-wrote and produced this movie.  It stars David Belle and Cyril Raffaelli.  There is some disagreement on who “invented” parkour, but there is no disagreement that Belle was at the very least one of the founders and first practitioners.  His athleticism is put to good use in this film and all of the stunts you see him perform are real.  There was only one scene where he had a safety wire attached to him and that was when he had to hang off the side of a building.  All of the jumping over alleys and off buildings was done completely free of any harnesses or cushions just as it is done in the real world.  This is why parkour is sometimes also referred to as “free running.”
Raffaelli is an excellent athlete in his own right.  He was the character in Live Free or Die Hard (2007) that McClane couldn’t shoot because he was jumping around on structures so much.  Both Belle and Raffaelli have been stunt choreographers on many films and have done stunts in films for others.
Even though parkour had been featured in a couple films before District B13, this was the first one that started to bring notice of it to the   Interest in it just exploded when two years later the first English language film featuring parkour stunts came out.  That was the James Bond reboot as Jason Bourne in Casino Royale (2006).
Also starring in District B13 are co-writer Bibi Naceri as the main bad guy and Dany Verissimo as the sister of Belle’s character.  Verissimo is a former adult actress in and Luc Besson wrote the part in the movie especially for her.  No, she does not get naked or have sex in the movie.  She had gone mainstream a couple of years prior to making this film and unlike Sasha Grey, who starred in Steven Soderbergh’s 2009 film The Girlfriend Experience, she only made a handful of adult films before and did not make any afterwards.
District B13 takes place in the near future in .  A section of the city has been walled off to trap all the bad elements inside (think 1981’s Escape from ).  Gangs have divided up the territory within the walls and they run everything, including a major drug trade.  Also within the walls are Leito (Belle) and his sister Lola (Verissimo).  Leito is waging a one man war to try to stop the drug trade.  The worst of these criminals is Taha (Naceri).  Leito manages to steal a shipment of heroin from Taha, but in return Taha kidnaps Lola.
Leito goes to the city gates and tries to get the police involved.  The police are actually in the process of abandoning their positions and instead of making things better they arrest Leito.  Some time passes and a police captain (Raffaelli) comes to ask Leito for help.  Taha has stolen an experimental bomb and is threatening to launch it at the rest of if his demands are not met.  The captain needs Leito’s help to infiltrate District B13 and recover the bomb.  Adding incentive for Leito is that his sister is still being held captive by Taha.  At first Leito and the captain clash, but eventually the two agree to work together.  There turns out to be more going on with the bomb than even these two knew about, though.
There was a sequel made in 2009 – District B13: Ultimatum.  It is not as good as this one, partially because Verissimo did not return.  She added a dimension to the first film that was lacking from the second one.
One note for fans of the TV show How I Met Your Mother – in this movie Belle looks disconcertingly like Josh Radnor (Ted).  You may need to wrap your head around the fact that it looks like mild-mannered Ted is performing all these hardcore action stunts.  (I didn’t include them in my Celebrity Look-alikes post because I figured Belle wasn’t that well known.)
﻿﻿﻿﻿
﻿﻿﻿﻿