Overall Thoughts on the Harry Potter Books and Movies

Note – There are spoilers for various events across the series in this post, so if you have not read all the books, or at least seen all of the movies, then you may want to skip this.

I just re-read and re-watched all of the Harry Potter books and movies, then wrote posts on each.  You can find info about this and links to all related posts here.

When I started this I was wondering if I would be able to do all seven in eight days.  I managed to read a book, watch a movie, write a review, and post a review for four straight days at the start, but then I had to slow down.  I read the fifth book over three days, the sixth over two, and the seventh over two.  I also took a day off between books 5 and 6 and books 6 and 7.  In the end, it took me two weeks to re-read the seven books, re-watch the eight movies, and then write and post the seven reviews.  As the books got longer and longer, so did my reviews.  My thanks to those people who took the time to read them.  While doing all of this I noted some things that I felt didn’t fit into any one review, but were more for the series as a whole.  Here are those observations.

Here are my rankings of the books (published order in parentheses):

Here are my rankings of the movies (released order in parentheses):

Notice that some of my lowest rated books became the highest rated movies.  In fact, starting with the third book (Prisoner of Azkaban) and continuing into the seventh movie I had an alternating pattern of “book not so good, movie pretty good; book pretty good, movie not so good”.

I found that reading the books right before watching the movies made all of the films a little better overall, and definitely made them more understandable.  As SJHoneywell noted in his comments for The Half-Blood Prince, the filmmakers sometimes assumed that people were more familiar with the books than they actually were.  There were a number of things in most movies that I would not have picked up on had I not read the books.

The consistency of the casting across the movies was terrific, even in small roles.

Special Mention #1 – Warwick Davis appeared in all eight films, but as different characters.  He appeared as Professor Filius Flitwick in movies 1, 2, 3, 5, 6, and 8.  He was credited as “wizard” in the fourth movie, but his appearance, though different from Flitwick’s in the earlier movies, was kept and he was credited as Flitwick again going forward.  He also played a goblin bank teller in the first movie and voiced the goblin named Griphook in the first movie.  In the seventh movie he actually played Griphook.  In the eighth movie he played both Griphook and Flitwick.

Special Mention #2 – the character of Albus Dumbledore appeared in all eight movies.  He was played in the first two by Richard Harris, but Harris passed away and the part was played by Michael Gambon in the other six movies.

Who wasn’t in Harry Potter - With these movies becoming such a cultural icon for the the filmmakers usually had no trouble attracting big name older stars to appear in a movie.  Off the top of my head the only actors/actresses who were already big names when the films started that never ended up in a movie are Ian McKellan (turned down Dumbledore because he had already played Gandalf), Hugh Grant (scheduled to play Professor Gilderoy Lockhart in Chamber of Secrets, but had to withdraw), Daniel Day-Lewis, Colin Firth, Anthony Hopkins, Judi Dench, Helen Mirren, and Kate Winslet (whose agent refused the role of The Grey Lady in the final film without ever even notifying her).

Some thoughts on the overall story:

[January 11th update – I meant to include the following:]

What the 19 years later epilogue tells us:  We learn that Harry and Ginny have three children: second year James Sirius, first year Albus Severus, and a nine year old daughter Lily Luna.  (James’ and Lily’s middle names are not mentioned in the book, but are given in the movie credits.)  Ron and Hermione have a first year daughter Rose and a younger son Hugo.  Draco Malfoy is married and has a first year son Scorpius.  His wife’s name is not mentioned in the book, but is given as Astoria Malfoy in the movie credits, so he did not marry Pansy Parkinson.  He and Harry acknowledge each other, but still appear to be estranged.  The son of Remus Lupin and Nymphadora Tonks (Teddy) is now out of school and apparently dating the daughter of Bill Weasley and Fleur Delacour.  Her name is Victoire and she still goes to Hogwarts.  Neville Longbottom is the Professor of Herbology at Hogwarts.  Hagrid is still at Hogwarts.  Percy Weasley is there at the train, so perhaps he has a child going to Hogwarts, too.  (I’m assuming Victoire, mentioned as a cousin to Ron’s and Ginny’s kids, is Bill’s child and not Percy’s because her name is French for “victory” and Bill and Fleur would be more likely to have a child born within a year or so of Voldemort’s defeat.)

Thoughts on the 19 years later epilogue:  It was a nice touch to have Harry/Ginny and Ron/Hermione now as parents seeing their own children off on the Hogwarts Express.  We learned Neville’s occupation, but not Harry’s, Ron’s, Hermione’s, or Ginny’s, other than none are teaching at Hogwarts.  We can probably figure after all that Harry accomplished he was able to become an Auror like he wanted.  Apparently his wife Ginny didn’t get a say in naming any of the kids since they are all named after Harry’s parents and heroes.  Maybe Ginny would have wanted to honor her dead brother Fred by naming one of her sons after him.  If I was Harry’s son Albus, I’d be worried about getting put into Slytherin House, too.  “Albus Severus Potter” = “A.S.P.” = “asp”.  The symbol for Slytherin is a snake.

Thoughts on the Blu-ray set of all eight movies:  I didn’t own any of the movies on Blu-ray, so this was a good deal for me.  It contains eight disks, one for each movie.  While this is fine for the earlier movies, whose disks contained a ton of extras, when it comes to movies 6, 7, and 8 it means you miss some extras.  By the time these last movies came out the studios were shifting extras to a second disk so they had an excuse to charge people more for the same movie.  When you start to play the eighth movie one of the pre-menu ads announces “You just bought the 8 disk Harry Potter set we rushed to market when there’s going to be a MUCH better set coming some time in 2012.  Ha ha ha ha ha ha!  Suckers!”  Okay, so maybe I paraphrased some of that, but that’s pretty much how it came across when I saw that ad right after buying the set.  I’ve looked online and there’s nothing really definitive on even what is coming, let alone if it will be in 2012.  It might be delayed to a later year.  If you don’t feel like waiting for it, or if fancy special editions are not that important to you, then I have included a link for the 8 movie Blu-ray set below.

On the aging of the kids:  I mentioned in my post on The Sorcerer’s Stone that the kids all looked so young in that movie.  Here are a couple of pictures showing the changes that 10 years or so can make: 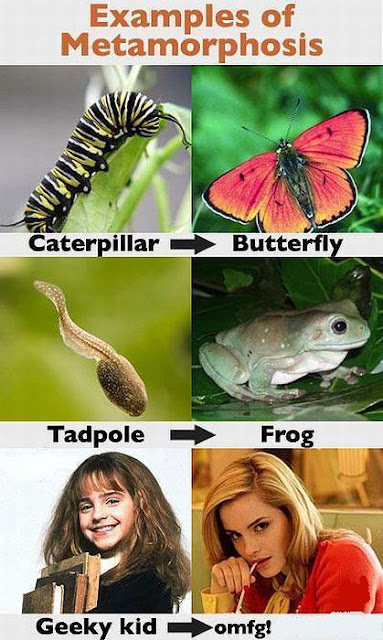 And here is the male version of it with Matthew Lewis (Neville Longbottom): 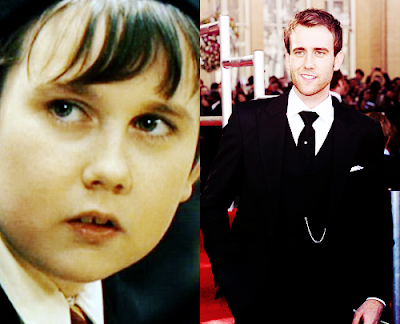 You can find a lot more then and now pictures here and here.

I also realized I have a bunch of Harry Potter related joke pictures on my computer, so I am going to put them in a separate humor post following this one.

As promised, here are the links for all eight movies in one set.  I also found and included a set of all seven books in paperback.  The books are not available for the Kindle.