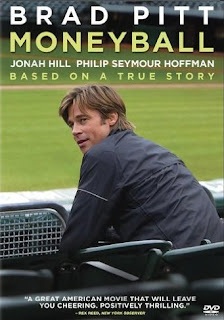 I read the non-fiction book Moneyball several years ago.  For those that have not heard of it, the book goes into detail on new ways of looking at baseball statistics in order to find players that have been undervalued by traditional baseball metrics.  When I heard a movie was going to be made based on this book, I was at a loss as to what in the book could translate into a movie.  Screenwriters Aaron Sorkin and Steven Zaillion did a good job of concentrating on one real person, then making up a number of events in order to turn the film into a traditional underdog movie.  They received an Oscar nomination for their work.
Brad Pitt stars as Billy Beane, the real life General Manager of the Oakland Athletics.  He had been a “can’t miss” baseball prospect when he was young, but he flamed out.  Even though he was a “five tool player” (running, fielding, throwing, hitting for average, and hitting for power) he was a bust because of his temper and because he didn’t know how to deal with failure and adjust.  He stayed in baseball organizations, and many years later he reached the key position in the organization.
While you technically do not need to understand how baseball works to understand the gist of the film, having a knowledge of the sport and business behind it will be a big help.  The General Manager (GM) of a baseball team is responsible for signing, trading, and releasing players.  His goal is to make the best team possible.  The GM is limited by the budget that the owner gives him to work with.  This is Billy Beane’s challenge.  The owner of the A’s does not have much money to spend.  The rich teams like the New York Yankees are signing away all of ’s best players.  Beane can’t compete with them, so he is left trying to find players the bigger teams have overlooked.
The movie invents a character named Peter Brand, played by Jonah Hill.  Brand is loosely based on Paul DePodesta, who was already in the organization at the time.  DePodesta objected to the “Hollywoodization” of his role into just a stats nerd and so the filmmakers changed the name of the character.  Most of what you see in the movie after this is fiction (i.e. was emphasizing on base percentage long before Beane ever became GM.)
Beane encounters Brand while meeting with another team and ends up hiring him to work for because he has a new way of evaluating players that Beane wants to try.  The team’s Manager Art Howe (Philip Seymour Hoffman), as well as the scouting department, all think Beane is crazy.  Nevertheless, Beane acquires castoffs, has beens, and even guys who never succeeded.  Because no one else wants them he is able to sign them for not much money.  They succeed far more than most other people expected.
You may be thinking that this sounds a lot like the 1989 movie Major League.  In a way, it is, except Moneyball is based on real events and the movie is not played for laughs.
Beane can bring the players in, but it’s the Manager who decides who to actually put on the field.  Howe refuses to use the new players and sticks with the ones who conform to traditional baseball thinking.  Beane outmaneuvers him by trading away players until Howe has to use the new ones.  In a scene that probably cemented Pitt as an Oscar nominee for Best Actor, Beane spends a high pressure few minutes at the trade deadline manipulating multiple teams and players’ agents in order to bring in a couple more players that he needs to improve his team.  Throughout the movie Pitt gets to display the intelligence, and the temper, that Beane is famous for.
Jonah Hill is also nominated for Best Supporting Actor.  It’s good to see him getting recognition for a non-comedic role, but this is definitely a case of “it’s an honor just to be nominated”.  He has little chance of winning.
Being a baseball fan I already knew what the outcome was for that year.  I won’t spoil it for those people who do not know.  I will say that this was the biggest weakness for me in the film.  Knowing what was going to happen removed most of the drama.  Also knowing what has happened in general in baseball since then (i.e. the Moneyball concept is now mostly useless for low budget teams because big budget teams use it, too), also led me to not buy into the movie’s central concept that this was a long term winning strategy for Oakland.  (Unmentioned in the movie is that the Minnesota Twins had an even lower budget than that year, and their team was formed using traditional baseball metrics.)
These reactions are specific to me, of course.  Most people seeing the movie don’t know how did that year, and don’t know anything about Moneyball (the book or the concept).  As I said at the top, this gives most viewers a traditional underdog movie, and who doesn’t like those?
I thought this was a good movie, but not a Best Picture one.  It’s definitely good enough to recommend to others, especially those who will be surprised by where the movie goes.  For those who liked the movie and are thinking of reading the book, I would say go ahead, but don’t expect the book to be a novelization of the film.  It’s more a set of chapters concentrating on different aspects of new metrics, including a long chapter on Bill James, the father of sabermetrics.  Now that I’ve written this movie review I’m going to take my copy of Moneyball down off the shelf and read it again.
Chip’s Rating: 3 out of 5 stars
DVD                      Blu-ray                 Instant Video