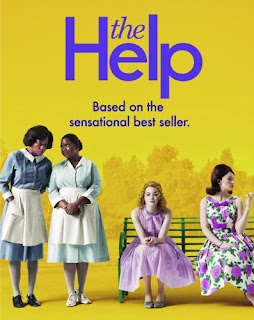 The Help is a movie about race relations in in the early 1960s.  It specifically focuses on the rich white wives and their black maids – the “help” in the title.  It is based on the best selling fiction novel by Kathryn Stockett.  There seems to have been some confusion among moviegoers about whether the movie is showing events that actually happened to real people being portrayed by the actresses in the film.  Confusion aside, this film appears to have shown a new generation of people how bad things used to be.
I grew up in the 1970s and it seemed like every other After School Special was about race relations, so this movie didn’t cover any new ground for me.  When I made that observation on some discussion boards I was surprised that a number of people were saying that it was completely new to them.  Apparently, education about things of this nature has been sorely lacking in schools in the last decade or two.  If that is the case, then this movie has done a good job of making sure people do not forget.
The movie’s plot follows a young woman named Skeeter (Emma Stone) who returns home to after graduating from college.  For no reason explained in the film (maybe she was always that way, or maybe attending college opened her eyes) she is different from every other white person in the film in that she doesn’t see the black maids as inferior to herself.  All of her peers are busy trying to do things like get separate bathrooms built in their houses so their black maids can use a different toilet from themselves.  Skeeter is busy socializing with the maids.
Skeeter wants to be a newspaper reporter, but all she can get for a job is writing an advice column for the local paper.  She decides that she can show people she can be a journalist by telling the story of the black maids.  Understandably, these women do not want anything to do with her at first.  The surest way for a black woman to at best get fired, and at worst get killed, would be to stir up trouble for the family that employs her.  One of them (Viola Davis) is treated so badly that she decides to talk to Skeeter.  Soon, another maid named Minny (Octavia Spencer) starts talking.  The publisher (Mary Steenburgen) still won’t deal with Skeeter, though.  She is told she will need to get at least a dozen different maids to talk.
While this main story is going on there are several subplots running through the film. One concerns a “white trash” woman (Jessica Chastain) who married a well to do young man and who has moved to town with him.  All the other white wives freeze her out because she is not proper.  She ends up employing Minny, who burned all her bridges with her last employer by feeding her a “special” pie.  Another subplot concerns the relationship of the chief white wife (Bryce Dallas Howard) and her mother (Sissy Spacek).  Yet another concerns a maid who gets accused of stealing.  Yet another concerns a possible romance for Skeeter.  Yet another concerns the health of Skeeter’s mother (Allison Janney).  Yet another concerns the disappearance of the elderly maid (Cicely Tyson) who raised Skeeter.
The above paragraph illustrates one of the weaknesses of the film – it sometimes loses track of the important parts of the story, while trying to satisfy the needs of all these subplots.  Paring down some of these would have resulted in a more powerful impact on the main story – the one about the maids.  A second thing that should have been removed from the film was the whole “special” pie subplot.  Yes, it was inserted for some humor, but it was wrong to include it for three reasons.  First, it just doesn’t fit at all with the tone of the rest of the movie.  Second, it is frankly quite gross.  Third, it takes you out of the movie because in real life it would have been no joke.  If a black maid had done that to her white employer in real life, at that time in history, in that location in the south, she very likely would have ended up dead.
Those weaknesses do not prevent me from recommending the movie, though.  It has many fine performances and it got nominations for three of the actresses – Viola Davis for Best Actress and Octavia Spencer and Jessica Chastain for Best Supporting Actress.  Overlooked in all of this was fine work by the star, Emma Stone.
It is also a little sad for me to not see Cicely Tyson’s work in this film mentioned at all.  Davis and Spencer (not to mention , Whoopi Goldberg, Angela Bassett and others) all owe Tyson a debt for paving the way for them with the Oscars.  Tyson was nominated for Best Actress in 1973 for her great work in the movie Sounder.  She was only the second black woman ever nominated for a Best Actress Oscar (after Dorothy Dandridge).  A year later she would go on to star in probably the best movie ever made about the life of a black woman in .  That movie was The Autobiography of Miss Jane Pittman.  She won an Emmy for Best Actress for the film – the first black woman to ever do so.  If you get a chance, I highly recommend watching this film.  It is actually a better movie than The Help.
I highly doubt The Help will win Best Picture, but odds are decent for at least one of the three nominated women to take home an Oscar.  If you are young and have not seen or read much on race relations in the 1960s then I definitely recommend this film.  For everyone else, if this movie sounds interesting then by all means check it out.
Chip’s Rating: 3 out of 5 stars