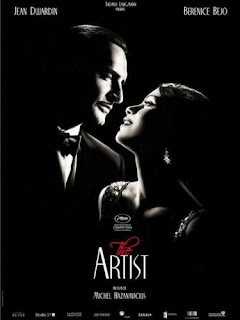 The movie The Artist is a love letter to the silent movie era of .  Not only is it about the effect of sound movies (“talkies”) on silent film stars, but it is presented in the same style as those movies.  The result is a very fun movie experience.  I still need to see a few of the Best Picture nominees, but right now this film is my favorite.

It is 1927 and actor George Valentin is the king of the silver screen.  He meets aspiring actress Peppy Miller, a big fan of his, and gives her a key step up in her career.  There is definitely a mutual attraction.  They meet a few more times over the next couple of years.  When the studio decides to go to all-sound productions, Valentin uses his own money to write, direct, produce, and star in his own silent movie.  He’ll show the studio that it’s his star power and talent that make a movie, not this gimmick with sound.  The year is 1929.

Valentin’s film does not get much attention, although Peppy Miller loves it.  She is now a star of talkies.  Right after coming to realize that sound is going to be more important than his former star power, the stock market crashes.  What money he had not already spent on making the movie is now lost.  He is ruined both professionally and financially.

He ends up living in a small apartment with only his faithful chauffeur and dog still with him.  He first pawns his tuxedo, and then sells what items he was able to take with him.  Over the next couple of years he sinks more and more into depression (no pun intended).  While this is going on, Peppy Miller has become a much beloved actress.  She tries to use her wealth to secretly help Valentin where she can.  Things come to a head when he reaches rock bottom.

You may have read the last few paragraphs and thought, “That sounds depressing.  How did this win Best Comedy at the Golden Globes?”  Well, the Golden Globes are known for shifting movies to the Comedy/Musical category if they are even remotely funny.  Second, The Artist does have a number of scenes that will bring a smile to your face.  Many of these involve Valentin’s little dog, who seems to always be with him.

I mentioned at the top that this film was shot in the same style as the films of the era it takes place in.  That means that it is mostly silent, is in black and white, and is not widescreen.  In addition, there are many little things throughout the film that are deliberately put in to also be in the style of silent films.  Having a little dog sidekick was common.  Having the man and woman “meet cute” is another.  There are many, many others.  You do not have to have seen other silent films to understand what is going on in this movie, but I definitely enjoyed it more because I had.

Regarding the film’s style: The Artist has not even won a single Oscar yet and there is already backlash from some areas saying that it is nothing more than a gimmick and therefore unworthy of winning.  Normally, I’m not bothered when someone’s opinion of a movie differs from mine.  Actually, I’m still not.  If you didn’t like The Artist, I’m fine with that.  However, I am bothered by people who will not stand up and say this straight out and instead try to denigrate the film by calling its presentation a gimmick.

As you can probably tell, I don’t much care for trying to tear down a movie by calling it a gimmick.  This implies that all people who like the film are too stupid to recognize that they are being tricked, whereas the person making the charge of gimmickry is smarter and didn’t fall for it.  Don’t say you disliked the film because you are smarter than others; say you disliked the film because you prefer a full color, full sound, widescreen movie.

[Gets down off soapbox.]

I think The Artist is a terrific film.  I thoroughly enjoyed it.  If you have never seen a silent film in your life you may be a little worried about being able to follow what is going on.  Don’t be concerned.  It is quite easy to understand what is happening and what people are feeling.  You should not avoid this movie because it is mostly silent.  You would be missing out on a great experience.

I debated with myself over giving this film four stars or five.  I finally decided that the ending of the film, which gives a nod to yet another type of movie that was dawning in the early 1930s, puts it over the top.  I really loved the ending, and on top of a film that I liked a lot, this makes it a five star movie for me.