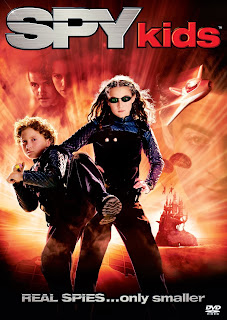 After making a string of popular, but violent films writer/director Robert Rodriguez decided he wanted to make a movie that his children would be able to watch.  The result was the intelligent, entertaining family film Spy Kids.  And I’m using the term ”family” in the best sense, not just as “only for kids”.  Adults, especially ones with kids of their own, can certainly identify with the parent characters in the movie.  The film is intelligent, too.  It doesn’t talk down to the adults or the kids; there’s no scatological humor to be found.  The result was that Rodriguez’s fans just killed this film on IMDB.  “Where’s the blood and guts?  Where’s the naked chicks?  Where’s the guns?  How dare my favorite director make a, a, a family film?!!!”  (The last sentence should be read in the high pitched tones of a child not getting their own way.)  Luckily there’s a far larger audience out there than just fans of Robert Rodriguez.  The movie was both a winner with critics (93% Fresh at Rotten Tomatoes) and with the general public, who made it a box office hit.


Spy Kids had me right from the beginning where the mother, Ingrid Cortez (Carla Gugino), tells her daughter Carmen (Alexa Vega) and son Juni (Daryl Sabara) a bedtime story.  It’s about two superspies, a man (Antonio Banderas) and a woman (Gugino again) who were sent by their countries to “take out” each other.  Instead, they fall in love.  There are a couple of scenes where they have to very discreetly romance each other, from sitting on opposite sides of a restaurant, to him proposing on top of the Eiffel Tower by flicking a box containing an engagement ring along a railing to her.  When the two are married they are attacked by forces that want both dead.  The story ends with a scene right out of James Bond where the two attach parachutes over their wedding clothes and jump off the seaside cliff location.  We see the parachutes open and they are heart-shaped.  They glide to a waiting powerboat and sail off into the sunset and into “the biggest adventure of their lives” – settling down and becoming parents.  When she finishes the story, Ingrid comes out into the livingroom and who is sitting there but her husband Gregorio (Banderas again).  She just told her kids the story of how their parents met, but the kids don’t know it yet.  They only see their parents as any other boring mom and dad.

Things change, though, when spies start disappearing.  Gregorio and Ingrid are only consultants now, but after 10 years or so of being parents they are a little too anxious to respond.  I don’t have kids of my own, but I’ve worked with a lot of folks who have and at a certain point they all seem to hit the same “I used to be cool, dammit” phase where they try to recapture, however briefly, the feeling that they’ve “still got it”, whatever that “it” is.  Gregorio and Ingrid jump back into the field all too easily and end up disappearing like the other spies.

A family friend, Uncle Felix (Cheech Marin), is taking care of Carmen and Juni.  He explains to them the truth about their parents.  The two kids resolve to try to find them.  As we have seen, Gregorio and Ingrid have been captured by Fegan Floop (Alan Cumming), a children’s TV show host.  The cartoonish characters he has on the show are actually the missing spies that have been transformed, mad scientist style, into these creatures.  His right hand man Alexander Minion (Tony Shalhoub) is also assisting him in creating an army of robot duplicates of the children of world leaders.  This is at the behest of Mr. Lisp (Robert Patrick).

Meanwhile, Carmen and Juni meet superspy Ms. Gradenko (Teri Hatcher) and then they seek out their real uncle, Gregorio’s older brother Machete (Danny Trejo).  He and Gregorio are estranged, though.  All siblings fight; Carmen and Juni have been picking on each other for much of the movie up to this point.  Well, Machete and Gregorio did the same thing, except they never got over it.  Machete got tired of always having to look out after his younger brother – a frustration Carmen has been sharing – and he and Gregorio went their separate ways.  He doesn’t want to help the kids now because of it.  Carmen and Juni do manage to make their way to Floop’s castle and find out what’s going on, and it’s not exactly what you may think.

If this plot sounds familiar it’s because three years later the 2004 Pixar film The Incredibles did almost the exact same story, except with superheroes instead of superspies.  And then in 2007 Mr. and Mrs. Smith used the plot again, minus the kids, of two superspies who marry, become boring, but then are supposed to kill each other.  Each of those films was also very popular at the box office and with critics.

One thing that really makes Spy Kids a good film for the whole family is that the kids get to live out the fantasy of going on an adventure, being independent, and saving their parents, while the parents get to live out the fantasy of remembering how they were before they settled down and became parents in the first place.  And what could be cooler than being gorgeous (we’re talking Carla Gugino and Antonio Banderas) international spies?

Another great thing about this movie is that it teaches the importance of family, without being preachy about it.  Carmen and Juni fight with each other, but they see what can happen when their Uncle Machete takes it too far.  They learn that their parents are real people, and that they are not just some embarrassing “mom” and “dad”.  The parents learn that maybe their kids are more capable than they give them credit for and they can be proud of them.

This film was followed by three sequels.  I saw the second one and it was a step down from this one.  It had some good scenes, but it didn’t have the intangibles of the first one.  The third and fourth ones received bad reviews and I’ve never gotten around to seeing them.  It’s possible that the two Machete films are also spinoffs.  I have not seen them, but Rodriguez has the same actor playing a character of the same name as he did in this film.

Watch for cameos by George Clooney, director Richard Linklater, and personality Dick Clark.  Watch also for another scene after the credits.  And for any adults who have seen a lot of movies Spy Kids is just a treasure trove of references, from The Wizard of Oz, to Willy Wonka and the Chocolate Factory, to The Matrix, to The Spy Who Loved Me, to many more.

And here’s a piece of trivia for you: this is the last movie Robert Rodriguez shot on film.  When he was doing the post-production for it at Skywalker Ranch George Lucas took the opportunity to show Rodriguez what could be done with digital cameras.  Rodriguez has never looked back.

Spy Kids is an entertaining family film.  Yes, it was certainly a departure for Rodriguez, but don’t let that dissuade you from seeing it.  As I said he actually made a film that can delight both kids and their parents at the same time, and that’s an all too rare accomplishment nowadays.  Unless you have to have blood and guts I highly recommend this film.