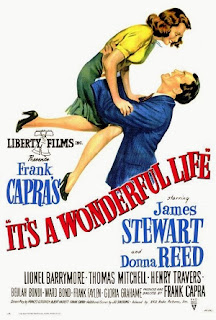 The story of how It’s a Wonderful Life went from box office failure to Christmas classic is well known.  When I was younger, though, I didn’t know why it seemed to show up almost every day on one TV station or another during the month of December.  It wasn’t until years later that I learned about things like the public domain and film rights.  Since the studio had not renewed the rights on this film anyone with a TV transmitter could show it as often as they liked and not have to pay anything.  It was this constant presence in front of a large number of people that finally made it popular.  I actually never saw it until I was an adult, despite how prevalent it was.  When I did I was amused by the fact that it’s not really a Christmas movie at all; it’s just that the climax happens on Christmas Eve.  It was still a heartwarming film from the king of heartwarming films – Frank Capra.


First things first, I admit that calling this a “Gloria Grahame movie” is a stretch.  She has only five quick scenes, and maybe a total of three or four minutes of screen time.  It was the first time she got noticed, though.  She plays Violet, the sexy blond girl that likes George Bailey (Jimmy Stewart).  Of course her character loses out to the virtuous girl Mary (Donna Reed).  I had not seen this film for many years so I re-watched it to refresh my memory of Grahame’s part in it.  You may best remember her character as the one that George loans money to so that she can go to .  This is one of the things that comes to a head for him since a man giving money to a “bad girl” is already tried and convicted in the court of public opinion.

Like most people, when George Bailey is young he has big dreams of leaving his small town and going out into the big, wide world and having an adventure.  His father runs Bailey’s Housing and Loan, a scrappy alternative to the local bank in the town of Falls.  The Baileys don’t ever really make money from their business but they are able to provide a number of citizens with the ability to own their first real homes and to get out from under the thumb of the filthy rich, mean as a hornet, big man in town Henry Potter (Lionel Barrymore).  Resemblances to Ebenezer Scrooge are completely intentional, especially since Barrymore was known for voicing the character on radio shows.

Things seem to keep happening at the worst times for George.  Just as he is going to go off to college his father dies.  Potter, as a member of the Board, is insisting that the Housing and Loan liquidate all assets and close.  George gives an impassioned speech about what it means to the town.  The board votes to keep it open…but only if George takes his father’s place as the person running it.  George’s Uncle Billy Bailey (Thomas Mitchell) is as absent minded as they come and there’s no way they would trust him to take over.  George very reluctantly agrees, and uses the money he had saved for his own education to send his brother off to college instead.

George doesn’t want to get married, since that would tie him down even more, but he soon finds himself walking down the aisle with Mary.  Just as they are going to leave on their big honeymoon, the crash happens and there’s a run on all the banks.  George and Mary use the $2,000 they have for their honeymoon to hand out loans to the folks in town so that they can get through the worst of the crisis.  They do this because Potter uses this opportunity to take over the town’s bank and he wants to do the same thing to the Housing and Loan.  George knows if Potter gets control of that then the folks in will never get out from under Potter’s thumb.

Years later it all comes to a head for George.  Some very bad things happen to him and it seems like he has just wasted his entire life always giving up his dreams and it has all led to nothing but the worst.  This is when an Angel named Clarence (Henry Travers) is sent to try to guide him through this.  We actually see George’s life in flashback as Clarence gets familiar with the man he needs to help in order to earn his angel’s wings.

Capra re-used several of the actors from previous films of his, including two of the three main characters.  Both Lionel Barrymore and Jimmy Stewart had been in Capra’s Best Picture winner You Can’t Take It With You (1938), and Stewart worked with Capra again the next year in Mr. Smith Goes to (1939).  Barrymore had to convince Stewart to take the role of George Bailey, though.

Like many actors Stewart had served during WWII.  Unlike most of these actors, especially the “name” ones, Stewart didn’t stay behind the lines entertaining troops; he piloted actual combat missions over .  He rose to the rank of Colonel during the war and stayed active in the service after that, finally retiring in 1959 as a Brigadier General – the highest rank any performer ever achieved.  It was not long after the war had ended when they were looking to cast It’s a Wonderful Life.  Stewart didn’t feel he was ready to transition back to making films, especially since he had not made one for five years.  Later in life he said he was glad he had taken the role because this turned out to be his favorite of all the films he made.

Donna Reed had been in almost 20 films starting in the early 1940s, and she had had sizeable roles in 1945 in The Picture of Dorian Gray and They Were Expendable, but It’s a Wonderful Life was the first time she got to co-star in a film.  Lionel Barrymore was a legend, but he had been in declining health.  The reason that his character of Mr. Potter is in a wheelchair in the film is not to try to make him appear more out of the ordinary; it was a necessity since Barrymore’s arthritic hips simply couldn’t support him anymore.  By the way, he had won a Best Actor Oscar for the 1931 film A Free Soul.

Of course, both Stewart and Capra had Oscars of their own – Stewart for Best Actor in The Philadelphia Story (1940) and Capra three of them for directing It Happened One Night (1934), Mr. Deeds Goes to Town (1936), and You Can’t Take It With You (1938).  Donna Reed would later join them as an Oscar winner for her performance in From Here to Eternity (1953).

And despite It’s a Wonderful Life being a box office “failure” – meaning it did not make back its budget on its initial release – it received five Oscar nominations, including Best Picture, Best Director, and Best Actor.  It lost in all three of those categories to The Best Years of Our Lives (1946).  That film had also opened only one week before It’s a Wonderful Life and many feel this was a big factor in not much notice being given to Capra’s film.

If like me you’ve somehow made it to adulthood and not seen It’s a Wonderful Life, then you owe it to yourself to seek it out.  It’s a little harder to find now that the rights to it were bought back and it is under control of a studio again.  Since this is the Christmas season it’s the most traditional time to watch it.  Don’t just see it because it’s “expected”, though; see it because it actually is a good movie.  I highly recommend it.