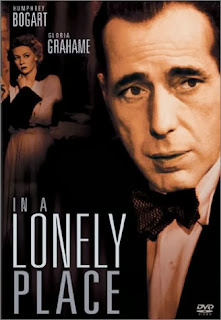 Of all the films on the 1,001 Movies You Must See Before You Die list In a Lonely Place was one of the most pleasant surprises.  Even though it starred Humphrey Bogart during his biggest days of fame I literally had never even heard of it before.  I sat down to watch the film knowing nothing about it and not expecting much, and when it was through I felt that this was the second best performance of Bogart’s career. (The Treasure of the Sierra Madre being the best.)  It also cemented in my mind the leading lady status of Gloria Grahame, who co-stars with Bogie.  Each of them reaches beyond their expected screen personas – he usually played the gruff but good man and she usually played the sexy temptress.  And in an era of filmmaking where only one of two endings was possible for a movie like this I was very pleasantly surprised to see this film take a third path.


Bogie plays “Dix” Steele, a Hollywood screenwriter.  If he’s not quite yet washed up, he’s certainly pretty close.  He hasn’t had a hit movie since before WWII.  He’s also burned a lot of bridges because of his violent temper.  We see a couple of examples of that temper early on in the film.  He’s very quick to anger, especially if he’s been drinking, and his response is often far in excess of what triggered him.

He meets his agent at a nightclub.  The agent (Art Smith) tries to convince Dix to adapt a popular novel.  Dix has heard of it and thinks it’s trash – something far beneath his dignity to adapt.  The agent points out that Dix needs work and adapting a popular novel might bring him a hit again.  The coat check girl in the nightclub is actually reading the book and says she can’t put it down.  Dix asks her if she will come home with him and describe the novel to him so he won’t have to read it himself.  The woman, whose name is Mildred (Martha Stewart), thinks his intentions are other than about the book, but goes with him anyway.

When they get home Dix and Mildred are spotted entering by his neighbor Laurel Gray (Gloria Grahame).  When Mildred finds out that Dix actually does want to hear her describe the novel, she is a little relieved.  Once she finishes he knows it is complete trash.  He pays for a cab to send her home.

He gets rudely awakened early the next morning by a cop named Brub (Frank Lovejoy) who turns out to be an old Army buddy of his.  Brub explains that Mildred was found murdered this morning and Dix is the last person to see her alive.  The police Captain (Carl Benton Reid) figures he’s got his man in Dix.  Not only was he the last one to be seen with her, but he has a history of violence that has resulted in more than one call to the police.  Fortunately for Dix, his neighbor Laurel asserts that she saw Mildred leave Dix’s apartment safe and sound.  Although highly suspicious of this convenient alibi, the Captain lets Dix go.  He doesn’t drop the investigation into Dix, though.

Dix, knowing that Laurel saw the woman arrive, but doubtful that she saw her leave, strikes up a conversation with her when they get home.  They learn about each other and there is an obvious and immediate attraction between the two.  In fact, the viewer may wonder if just made up that alibi for him in order to get to know him.  The two start a relationship, which just makes the Captain more suspicious, and even makes Dix’s friend Brub start to doubt.

During a whirlwind love affair Dix and Laurel experience many highs, but also several lows.  Dix starts to write like a demon, inspired by his new relationship into bouts of creativity he hasn’t had for years.  On the other hand, starts to see Dix’s violent nature in action.  After one too many of these episodes she even wonders if Dix really did kill Mildred.  When he asks her to marry him she accepts mostly out of fear of what he might do to her if she refuses.  Did Dix really kill Mildred?  That would be telling.

I mentioned at the top that films like this, and of this time, really could end only one of two ways, yet this found a third path to take.  Director Nicholas Ray actually shot one of those kinds of endings then changed his mind.  He brought in the barest number of people he could to the set and together they improvised a new ending on the spot.  This is the one that ended up in the film and I feel it is much better for it.

While this movie is based on the 1947 Dorothy B. Hughes novel of the same name, it bears little resemblance to it.  In fact, there are parallels from Dix’s reaction to the trashy novel he’s asked to adapt, yet decides to write something almost completely different, and the real life changes made from the novel to the film’s screenplay.  I have not read the book, but its description makes it sound more like The Talented Mr. Ripley than anything else.

Bogie and Grahame are great together in both the love scenes and the fear scenes.  Before the film started Bogart had wanted his wife Lauren Bacall to play the role and he had strongly campaigned for her.  Despite this Nicholas Ray cast his own wife for the part.  The producers, who had wanted Ginger Rogers, were concerned about Ray’s and Grahame’s marriage causing havoc on set so Grahame actually had to sign a contract stating that she acknowledged that she had to take direction from Ray during the hours of filming and that she couldn’t try a wife’s tricks like “nagging, cajoling, or teasing” to get Ray to change something.

As it turns out, Ray and Grahame secretly separated during the making of this film, although they would not be divorced for another two years.  Despite this, both made what many now consider to be perhaps the best film of their careers.  I mentioned in my parent post for this category that Grahame received two Oscar nominations, winning once, but that I felt she could have been nominated a couple more times.  This is one of those times.  She showed in this film she could be more than just the sexy temptress, or bad girl with a heart of gold.  She got to play a complex character.

And speaking of which, Bogie also got to play one of the most complex characters of his career.  He made a number of now-classic films, but most of them re-used the same kind of character he made famous in The Maltese Falcon.  He didn’t often get to stretch beyond the image movie goers expected of him.  As Dixon Steele in this film I’m sure his performance made many viewers uncomfortable.  Here was a man who is somewhat sympathetic, but just as you start to identify with him, he has a violent outburst that just can’t be justified.  The viewer is not shown Mildred’s death, so even we wonder if he really did kill her.  Although Bogie started out playing bad guys, he had been the hero for ten solid years of very popular films.  (The exception being 1948’s The Treasure of the Sierra Madre.)  This role now called that heroic image into question, and in a big way.