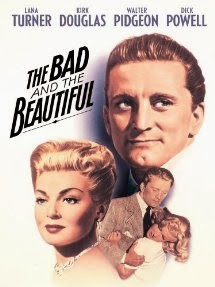 It didn’t take me much time into watching The Bad and the Beautiful to figure out why this film got greenlit.  It’s a tale of a once successful movie producer who was a towering presence both in the industry and in the lives of the four people who open this film.  loves stories about itself and they’ve been making them ever since there was a .  And I’m sure contemporary audiences had fun trying to figure out which real figures were being fictionalized in the movie.  This film holds the record for winning the most Oscars – five – without being nominated for Best Picture.  Among those is Gloria Grahame’s win for Best Supporting Actress.


Grahame had been nominated before for 1947’s Crossfire, and I feel she should have also been nominated for 1950’s In a Lonely Place.  In fact, she’s not really onscreen for too many minutes in The Bad and the Beautiful, leading some to wonder if she “deserved” the Oscar.  Of course, there is no time minimum set for a performance to win.  Some people asked the same question about Judi Dench winning Best Supporting Actress for Shakespeare in Love (1998).  Her performance entailed even fewer minutes than Grahame’s.  And Dench isn’t even the winner with the least time onscreen – that’s Beatrice Straight for her five minutes and two seconds in 1976’s Network.  Hermione Baddeley got nominated, but didn’t win, for her two minutes and nineteen seconds in 1959’s Room at the Top.  It’s also possible that since Grahame had another supporting performance in eventual Best Picture winner The Greatest Show on Earth that same year people voted for her combined performances.

The Bad and the Beautiful is really three mini-movies presented within a framing device of three people recalling how they first met producer Jonathan Shields (Kirk Douglas) and why they now hate him.  The film opens in the present with these people all receiving a message from producer Harry Pebbel (Walter Pidgeon) that Shields is going to be making a very expensive transatlantic phone call at a specific time (this was 1952 remember) and he wanted to have them there with Pebbel to hear him pitch the idea of making a movie together.

These three folks are director Fred Amiel (Barry Sullivan), actress Georgia Lorrison (Lana Turner), and screenwriter James Lee Bartlow (Dick Powell).  The tide has turned for all of these people.  While Shields was once top dog in , he is now on the way down fast and needs a big hit to revive his career.  And these three who were once nobodies are now award-winning in their fields.  Even if they didn’t hate Shields, just taking a chance and working with him again could harm their careers.

Before the call comes in Pebbel asks them to explain just why they all hate Shields so much.  (Pebbel already knows, but he wants to hear them tell their own story.)  We then see three separate flashbacks, first with Amiel, then with Lorrison, then finally with Bartlow.  I won’t spoil why each of them hates him.

In Amiel’s tale we see Shields as a young man just trying to get a regular job in .  He and Amiel end up splitting the tasks of producer and director on a series of not even B grade quickie films.  They finally get the attention of established producer Pebbel, who gives them a stupid horror movie about cat men to make.  Against Pebbel’s wishes Shields changes much of it and it turns out to be the most acclaimed movie of Pebbel’s career to that point.  (Resemblances to Val Lewton and 1942’s Cat People are entirely intentional.)  Shields and Amiel are now on their way up.

In Lorrison’s story we see how she was a boozy actress just trying to hustle up jobs as an extra in movies.  Shields, now at the top of his power in , meets her, wants her, and with his massive ego decides he can turn her into a major leading lady.  Things go poorly for a long time and Shields starts to get questions about his judgment.  Things get very complicated in their personal lives, too.

Finally, in Bartlow’s story we see that he was an intellectual, far removed from .  He was a college professor who wrote a book that captured the attention of Shields.  Bartlow is convinced by Shields to come to to adapt his own book into a screenplay.  Having no small part in making Bartlow take the job is his wife Rosemary (Grahame).  She can’t wait to see the bright lights of Tinseltown and maybe run into some big stars.  It’s soon obvious that she and her husband are having very different experiences there.

Once the tales are done we return to the room where the transatlantic call is about to come in from Shields.  Will they stay and listen to his pitch for making a movie with him?

Also in the film in smaller roles are Leo G. Carroll as a very demanding director – resemblances to Alfred Hitchcock are intentional – and Gilbert Roland as Shields’ friend Gaucho.  Roland was basically playing a version of his own screen persona of the “Latin lover.”  Leave it to Beaver (and Airplane!) fans should watch for Barbara Billingsley in an uncredited role as a costume designer.

was nominated for Best Actor and he does quite a job as Shields.  He definitely portrays the larger than life persona needed for the part, even though he’s easily the shortest of the male cast members.  Even though this is a fictional biography of a man’s life we see the “warts and all” aspects of Shields.  This was not that common in this era of moviemaking.  Usually biographies were mostly whitewashed of anything controversial.  There were aspects of The Big and the Beautiful that the filmmakers had a hard time getting past the censors at the Production Code Authority.  It probably helped that the director was Vincente Minelli who had just directed the prior year’s Best Picture winner An American in (1951).

The Bad and the Beautiful certainly has some melodramatic moments in it.  If you hate that you may want to skip this film.  But what it also has are some very good performances.  If that, or the story concept, interests you then I recommend you give this a try.