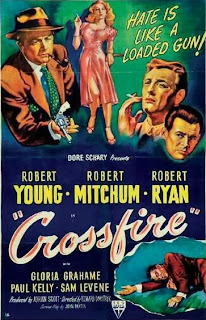 Crossfire was a nominee for Best Picture in 1948 and had four other nominations, including Director, Screenplay, and Best Supporting Actor and Actress.  Nowadays, though, if it gets remembered at all it is for being “that other anti-Semitism movie”.  You see, Gentlemen’s Agreement (1947) won the Best Picture that year and its central premise was WASP Gregory Peck pretending to be Jewish and finding out the subtle and not so subtle ways that people held that Jewishness against him.  Crossfire doesn’t focus on the character receiving the abuse; it actually uses that character as the driving force for a whodunit because it opens with him having been murdered.  This film is worth seeking out, though, because of some good performances in it.


Ostensibly this movie is a starring vehicle for Robert Young as police detective Finley and Robert Mitchum as a recently mustered out after WWII soldier named Keeley.  In reality, though, this is more of an ensemble cast with several of the somewhat smaller roles allowing people to shine.  This includes the two who received acting Oscar nominations – Gloria Grahame and Robert Ryan.

The film opens with police at the scene of a murder.  They find a man beaten to death and among the evidence is the wallet of Mitchell (George Cooper) that was left behind in the couch cushions.  While processing the scene a soldier by the name of Montgomery (Ryan) arrives hoping to find his friends.  Finley quizzes him and they get the backstory.  The dead man, his girlfriend and three soldiers – Montgomery, Mitchell, and another by the name of Floyd (Steve Brodie) met at a bar and after a lot of drinking they ended up at the apartment of the dead man.  Floyd got passed out drunk so left with him to get him home safely.  He was returning to look for Mitchell when he met the police.  He tells them there’s no way his friend Mitchell could have killed that man, or any other man.  Even when shown the wallet he says it could have just slipped out because Mitchell was very drunk, too.

When Finley goes to where the soldiers are staying to look for Mitchell he encounters Keeley, who also insists there is no way that Mitchell could have killed anyone.  He doesn’t know where Mitchell is, but after Finley leaves he sends some other guys out trying to find him before the police.  Eventually Mitchell is found, but he was so drunk he’s having trouble remembering anything that happened.

As he’s piecing things together he remembers meeting a woman named Ginny at a bar.  She offered to dance with him for money.  After a bit she realizes he’s too drunk to be a customer, but she thinks she can maybe get something from him later so she sends him upstairs to sleep it off for a few hours in her apartment.  Just after Mitchell wakes up a mysterious man comes in.  He claims to be Ginny’s husband, then ex-husband, then just a friend, then her husband again.  The movies couldn’t say it back in 1947, but Ginny is a prostitute and this man is probably either her pimp or her partner in a honeytrapping business where she lures drunken men back to her room for him to rob.

At first it seems like this gives Mitchell an alibi, but since he was asleep and alone that might be tough.  Even getting Ginny to cooperate and tell her part of it might be impossible because she wants nothing to do with the police when Keeley brings her to Finley’s attention.  And that mysterious man who was there when Mitchell woke up?  He’s nowhere to be found when the police are around.

I won’t spoil whodunit, but any adult who’s watching the film ought to be able to figure out pretty early on who the killer is.  It’s more about the process of getting there and the mood of the movie.  It’s shot like a noir, but it’s not one.  While both Finley and Keeler are trying to figure out what happened, that’s about it for noir comparisons.  Grahame does stand out in her performance in this film.  She later said that this was her favorite role of all the ones she did in her career.

Back in 1947 the subject of anti-Semitism was not one that many people wanted to talk about.  Both this film and Gentlemen’s Agreement faced opposition to getting made – and much of that came from the predominantly Jewish heads of the studios who were afraid of the films stirring up more trouble than they solved.

The funny thing is, Crossfire changed the story to be about anti-Semitism because the premise of the Richard Brooks novel that it was based on – The Brick Foxhole – was too much for a studio to handle back then.  You see, the book dealt with homophobia; the man who gets killed was gay.  I didn’t know this at the time I was watching the movie, but once I found out then some of the lines in the film such as how “Jews don’t have what it takes to be real men” finally made sense.  They kept the derogatory comments about gay men and just substituted being Jewish for it.  It does lead to some strange exchanges in the film if you don’t know this, though.

If you like whodunits and/or would be interested in seeing the noir style used in a non-noir film then you may want to check out Crossfire.  If it sounds like something you’d appreciate then I recommend you give it a try.