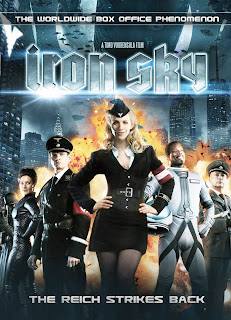 Iron Sky is a very tongue in cheek kind of movie.  So much so, in fact, that a sizable number of people took it way too seriously and got offended by it.  When you’ve got a partially fan funded Finnish film, starring Germans and Americans, shot in English, and filmed mostly in Australia, you know right there it’s going to be at least a little different from the norm.  And if that isn’t enough of a clue, then the basic premise should have screamed “we’re having fun here”.  It’s about Moon Nazis who attack Earth.  I was in the right mood when I saw this.  I had a grin on my face for much of the film.


The movie opens in 2018, an election year for the U.S. President (Stephanie Paul).  Yes, 2018 won’t be a Presidential election year, but the filmmakers are Finnish.  How many Americans know when the Finnish elections will be?  And perhaps it was intentional just to provide another clue this isn’t supposed to be taken seriously.  Paul plays the President as if she were the love child of George W. Bush and Sarah Palin.  That alienated a whole block of right wing viewers right there.  She’s behind in the polls in her re-election campaign and her campaign manager has convinced her she needs to attract more of the minority vote.  The result?  The “send a Black to the Moon” mission.

Male model, and black man, James Washington (Christopher Kirby) is sent along on a mission to the dark side of the Moon.  He and the other astronaut discover human constructs.  The other man is soon killed and is taken captive.  It turns out that in the waning days of WWII the Nazis launched some of their forces to the Moon to create a “Fourth Reich” whose goal would be to eventually come back and take the Earth.  The problem is that their computer technology just isn’t sufficient to drive the enormous Gotterdammerung ship they have built for the attack.  Guess what they find on ?  His cell phone.  It has far more computing power than anything the Nazis have developed.

The Nazis see as the advance scout in what will be an attack from Earth on their base, despite ’s insistence that nobody even knows they are there.  The Nazis are also greatly confused and concerned that it is a black man and not an Aryan that was able to reach the Moon.  They have their resident mad scientist Dr. Richter (Tilo Pruckner) “cure” him by making him white and then they have the doctor examine the cell phone.  Its battery goes dead so a mission to Earth is undertaken in order to obtain more of these marvelous cell phones.  The Moon Fuhrer (Udo Kier – could you have a movie about Moon Nazis and not have Udo Kier in it?) orders his right hand man Klaus Adler (Gotz Otto) to take Washington to Earth and return with these devices.  There are a few complications, of course.

The first is that Dr. Richter’s daughter, and Adler’s girlfriend, Renate (Julia Dietze) stows away on the mission.  She’s tired of being passed over for being a woman.  She is an altruistic Nazis.  She strongly believes in what she thinks they stand for.  Her favorite movie is the “10 minute short film” The Great Dictator made by Charlie Chaplin that “celebrates Hitler.”  She’s been lied to her entire life, but doesn’t know it yet.  The second complication is that almost immediately escapes.  He has no clue that he’s been made white, though, so when he tries to warn people that there are Moon Nazis that are going to attack Earth he’s not recognized and is treated like every other crazy person.

Adler and Renate end up meeting the President’s campaign manager, who brings them to the President.  Once she talks to the enthusiastic Renate the President decides that the National Socialist Party (which she has no clue are the Nazis) have just the kind of message her campaign needs: strength, unity, purity.  As it turns out, she’s right.  The new campaign is wildly popular.  Renate becomes her new campaign manager.  In the meantime the Moon Fuhrer has also come to Earth to find out what has been taking Adler so long.  Adler uses the opportunity to stage a coup and become the new Fuhrer.  Renate, in the meantime, has been having a change of heart.  She’s started to learn what being a Nazi really means, and it’s not the whitewashed version she was taught.  She finds and the two decide that they’ve got to stop the Nazis.  Meanwhile the President has warned the U.N. about them and the entire Earth has also decided they’ve got to do something.  Might that something be launching super secret spaceships that they’ve all lied to their allies about not having?

There are a ton of references in this film.  The first is the concept itself.  The filmmakers claim it came to them in a dream, but it’s suspiciously like the plot of the classic 1947 Robert Heinlein novel Rocket Ship Galileo.  And later in the film it shows the Nazis hauling chunks of Moon rocks to hurl at the Earth’s gravity well just like in Heinlein’s Hugo-award winning novel The Moon is a Harsh Mistress.  Of course, if James Cameron can keep "borrowing" from Heinlein than these filmmakers should be able to as well.

When first gets to the dark side of the Moon a bit of Pink Floyd music from the album of the same name can be heard.  Right after has been made Aryan he is in a wheelchair and he tries to suppress a Nazi salute like in Dr. Strangelove.  I mentioned that the U.S. President has a lot of mannerisms of both George W. Bush and Sarah Palin.  There’s a scene where someone just goes off on their subordinates as a spoof of the online meme of Hitler doing it in the 2004 film Downfall.  Renate wears a suit with the number 1138 on it as a nod to George Lucas.  When the Nazis order the attack on the Earth to begin it is at the exact same time, and uses the same rationale, as the first attack on in WWII.  And I’m sure there are many other references or little jokes I missed.

I’ve already mentioned how this movie managed to offend a lot of people.  In addition to rightwingers, the concept of making a black man white bothered some, Germans were bothered by Nazis once again being shown to represent them, and the filmmakers had some very pointed things to say about how untrustworthy ALL politicians and governments are, whether they are Nazis, Americans, Chinese, Russian, or even their own country of Finland.  The ending of this film, which is very darkly humorous, certainly drives this home.

There is also a scene after the credits that might have simply been a joke or might have been setting up a sequel.  A satellite is shown to be in orbit around Mars.  Who might have put it there?  Well, it is the “red” planet, after all.  The filmmakers have announced that they are hoping to start filming a sequel in 2015.  And this time it will be entirely funded by public sources.  About 10% of Iron Sky was, after the filmmakers got the word out about it.

So, as you can tell by the paragraphs above this is not Star Wars, Star Trek, or any of the other big “space battle” kinds of films that some people were expecting when they sat down to watch this.  It’s a low budget film that takes a skewed look at a very skewed concept and then has a lot of fun with it.  Thin skinned people should probably avoid this.  For everyone else, if it sounds like fun then I recommend you give it a try.