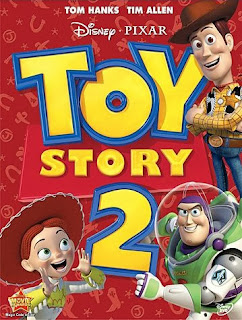 The tale of how Toy Story 2 came to be is a curious one.  It was only the third film to come from Pixar – Toy Story (1995) and A Bug’s Life (1998) being the first two – and they were already doing a sequel?  What happened is this little animation company got taught a lesson in real life business from the massive Disney Studios.  Pixar had signed a deal with Disney to produce five animated films.  After the success of the original Toy Story, Disney started prepping a cheap, knockoff, direct to video sequel of it.  This horrified Pixar, who offered to do the sequel themselves.  They also figured it would get them one film closer to not having to deal with Disney anymore.  After they released Toy Story 2 Disney said “not so fast, the deal calls for five original films; sequels don’t count.”  This meant that Pixar had to not only get back to Monsters, Inc., which they had set aside to work on Toy Story 2, but they also had to deliver Finding Nemo and The Incredibles to Disney.  After that Disney just bought Pixar outright.

The amazing thing is that despite all of this Toy Story 2 is a fantastic film.  In fact, I considered it the best film that Pixar had ever done until Toy Story 3 eclipsed it eleven years later.


One thing that helped Pixar quite a bit in turning out such a great sequel is that they had some ideas originally intended for the first film that they had ultimately not used.  These include the framework of the sequel with the yard sale, along with scenes of Woody having a nightmare and an animated Buzz Lightyear cartoon.

Pixar brought back all of the voice cast from the original – Tom Hanks as Woody, Tim Allen as Buzz Lightyear, Don Rickles as Mr. Potato Head, Estelle Harris as Mrs. Potato Head, Jim Varney as the Slinky Dog, R. Lee Ermey as the commander of the little green Army men, Wallace Shawn as Rex the dinosaur, Annie Potts as Bo Peep, and Pixar-regular John Ratzenberger as Hamm the piggy bank.  To this cast they added Joan Cusack as Jessie the cowgirl, Kelsey Grammar as Stinky Pete the prospector, and Wayne Knight as a human named Al who owns a large toy store and who is also a collector of vintage toys.

Through a series of events, Woody is accidentally seen by Al during a yard sale.  Even though the mother tells Al that Woody is not for sale, he ends up stealing him anyway.  The other toys witness this and set out to rescue Woody.  It turns out Al has the other toys that go in the same set as Woody (the aforementioned Jessie and Stinky Pete, as well as a horse named Bullseye that does not speak.)  Woody had never realized there were other toys like him, nor that his character was once the star of a beloved children’s show, so even though he wants to get back to Andy, the boy that owns him, he can’t help but feel like he fits in with these new toys he has just met.  The problem is that now that the entire set is complete, Al intends to sell them to a Japanese collector that is going to put them in a museum where they will never be played with again.

There is a lot of fun and some exciting action scenes as the toys try to find and rescue Woody.  One with a slowly rolling sewer pipe is surprisingly tense.  When the toys finally get to the toy store Pixar just goes wild with jokes and references.  They also get to both answer some questions left over from the first one, as well as poke some fun.

My favorite joke is when the toys are being shown around the store by Tour Guide Barbie.  While driving by an entire row of Buzz Lightyear dolls she notes that short sighted retailers failed to stock enough when he was introduced.  This is a reference to Pixar being unable to find anyone interested in working with them to either make or market a Buzz Lightyear doll before the first film was made.  After seeing the film people went to go buy one and there were almost none to be found.  And making this joke all the better is that it’s coming from Barbie, a toy that Mattel refused to allow to be used in the first film.  Once Toy Story became a success Mattel was practically falling all over themselves to ensure Barbie would show up in the sequel.  By the third film there’s a whole Barbie meets Ken subplot.

People familiar with Pixar’s earlier efforts will also be rewarded by Toy Story 2.  The man who shows up to clean and repair Woody before being sold is Geri from Pixar’s Academy Award winning animated short Geri’s Game.  Also, watch for cameos from a couple of the characters from A Bug’s Life, both during the film and in the end credits.  Speaking of which, Pixar originally had two different sets of end credits and “bloopers” on the theatrical film in order to try to get people to go see it more than once.  All of them appear on the home DVD release.

As usual Pixar also has any number of references to themselves or the actors in the film, whether it is the Pizza Planet truck appearing, or their real address being used for the location of Al’s Toy Barn, or the names of the Pixar folks (such as “Lasset Air” airlines for director John Lasseter.)  My favorite reference, though, is when Jessie first meets Woody she says, “Sweet mother of Abraham Lincoln!”  Woody is voiced by Tom Hanks.  Abraham Lincoln’s mother was a woman named Nancy Hanks.  Yes, they are related.  Tom is a direct descendant of ’s uncle which makes him a first cousin, several times removed, of .

This film also answered the biggest question from the first film: if Buzz thinks he’s a real spaceman and not a toy then why does he freeze like all the other toys when a human appears?  There’s a fun sequence when “our” Buzz encounters one of the other Buzz toys who thinks that our Buzz has violated orders to remain in sleep mode until “activated” by the package being opened.

It’s not all jokes and action, though.  There’s a sequence when we learn Jessie’s backstory and about how happy she was to be played with by the girl who owned her.  Girls grow up, though, and Jessie gradually became less and less a part of her life.  This is a very poignant scene and I am man enough to admit it brought a tear to my eye.  This scene is also a harbinger of the main plot of Toy Story 3.

I felt that as fun as Toy Story was, that Toy Story 2 was even a step up from it.  With even better jokes, better action, and the addition of the sadness that can come in the life of a toy, this film really showed that “animated” does not have to equal “for kids”.  It also showed that what set Pixar apart from other animation companies was not the cgi, but the quality of the stories in the films.  You should see the original film first, and then you should watch this sequel.  I give it my highest recommendation.

In fact, you should then watch Toy Story 3.  This is the very rare, possibly unique, series where each film has improved on the one that came before it.  (You can read my reviews of Toy Story and ToyStory 3 by clicking on the titles in this sentence.)  I am very happy that the 1,001 Movies editors put the entire Toy Story trilogy in their latest edition.