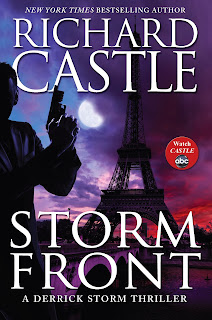 This is the sixth novel to be published under the author’s name of Richard Castle – the fictional character on the TV show Castle.  When the show opened Richard Castle was the popular author of a series of thrillers that all had the main character of Derrick Storm.  He was just publishing his final Storm book, though.  He had killed off the character since he was bored with him.  He soon got an inspiration for a new character of Nikki Heat, an NYPD detective based on the Detective Beckett character he was working with on the TV show.  During the course of the show we have seen the Castle character write five Nikki Heat novels.

This fall a new Derrick Storm book was also published.  It is not a graphic novel “adaptation” like the ones done for the first three non-existent Derrick Storm novels.  This is a new story that picks up four years after Richard Castle killed off the character.  The first thing he’s got to do is explain how Storm is still alive.  It turns out that the CIA faked his death because things were just too hot for Storm and he needed to lie low for a long time.  He’s now been tapped to once again help the CIA because there has been a reappearance of Storm’s old adversary Gregor Volkov.


Volkov has been torturing and killing money traders in various countries.  No one knows where he will strike next, or even why he is doing this.  That is Storm’s mission: to figure it out and to stop Volkov by any means necessary.  Along the way, Storm gets involved with a beautiful Chinese agent who is also after Volkov.  And it wouldn’t be a Derrick Storm story if he didn’t encounter Agent Clara Strike at some point.  Readers of the Nikki Heat books can look forward to a cameo from a certain NYPD detective.

Like the Nikki Heat books, the author of this novel remains a mystery.  The actual writer is speculated to be one of the real authors who have appeared on the show (i.e. Michael Connelly, James Patterson) or one of the show’s creators (i.e. Andrew Marlowe).  It’s also possible, even likely, that they tapped a second writer for this Derrick Storm novel since it was published at the same time as the latest Nikki Heat novel.  The style of the writing in this book is similar enough to the Nikki Heat novels to not be jarringly obvious that it is not the same author, which helps maintain the fiction of Richard Castle.

Like the Nikki Heat books Storm Front has some fun references for people, including ones that are outside both book and show.  The dedication of this book will be recognized by anyone who watches the TV show, and is very fitting for a globe-trotting spy.  This Derrick Storm novel does differ from the Nikki Heat ones in that there is no Acknowledgements section thanking the people involved with the show.  I suppose this makes sense since Derrick Storm is not based on any of those characters.  This did not stop the author from inserting things such as an airplane pilot with the name of Captain Roy Montgomery.  Part of the plot in the novel, which I will not spoil, will also be familiar to those who watch the show.

I do have to say that it took me longer to get into this book than it did the Nikki Heat ones.  I think that is due to the fact that since the Heat character is based on the familiar Detective Beckett there was an immediate comfort of knowing the character.  With Derrick Storm there is no such backstory, even with the three graphic novel “adaptations” that have been published.  Once I finally settled in, though, this was a very engaging story.

I can’t swear that if you like the Nikki Heat books that you’ll like this one, too, but there is some similarity in that you can pick out “influences” on the story from events that occurred on the TV show.  I’d suggest you give this a try and see if you like it.
Posted by Chip Lary at 10:11 AM