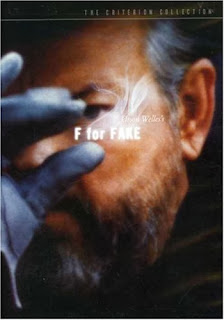 Orson Welles made many different kinds of films over his career.  Citizen Kane (1941) is the acknowledged best of the bunch.  After that opinions differ, but Touch of Evil (1958) is probably the one I see most often mentioned next.  I would agree with those two rankings.  After seeing F for Fake, though, I have to say that I would put it very close to, and possibly even with, Touch of Evil in terms of how good it is.  It’s a puzzle box of a movie that may or may not be a documentary, may or may not be Welles stroking his ego, and may or may not be Welles having a tremendous joke on everyone.  I feel it’s quite possibly all three.


In the film, narrated by Welles both in onscreen appearances and in voiceover, several different forms of fakery and trickery are examined.  Not the least of these is the movie making business itself.  While talking about an art forger and the man writing his biography, who himself has been accused of fabricating a story on Howard Hughes, Welles also interjects stories about his own days starting out in acting and his infamous War of the Worlds fake invasion broadcast.

Right from the beginning of the movie Welles says he will tell us the truth for a part of the film, which means we can infer that he will be lying to us for part of it.  It starts out as an almost straightforward bio of art forger Elmyr de Hory.  He has spent much of his life painting in the style of many masters.  He has successfully fooled the most respected art experts and historians, not to mention the curators of any number of museums.  He claims that if you were to walk through the halls of various art museums that several of the paintings hanging on the walls are his, not previously undiscovered works by famous painters.  It’s not just all on him, though.  It’s pretty much acknowledged that he may not have fooled as many people as he claims; that instead it’s to the advantage of the experts and curators to claim his paintings as the work of masters.  In some cases, his known forgeries actually are worth more than the originals.  And if this is the case, what truly is “art” and who can you really trust to offer expertise on it?  Is the entire art industry just an enormous scam on the public?

That is the first section of the film.  The second one deals with Clifford Irving, the man who has been interviewing de Hory for a biography.  became famous when he wrote a biography of billionaire recluse Howard Hughes after interviewing him in secret in .  There’s just one problem, though – Hughes claims to have never met and that ’s book is a complete fabrication.  So is the man sent to write the story of the art faker a faker himself?  And would this actually make him better qualified to write de Hory’s bio?  And is Welles, who rose to fame on the back of his fake War of the Worlds broadcast, the best possible man to do a “documentary” about these two fellow fakers?

The third section of the film deals with the painter Picasso and a beautiful young woman named Oja Kodar who he met in .  We see this woman at the beginning of the film as Welles teases the story to come.  She eventually agreed to pose for Picasso, but only if she got to keep the artwork.  A little later Picasso hears about these paintings being sold and he is outraged, since the agreement was that Kodar would keep them for herself.  Did she use her beauty to trick the famous painter into giving away valuable art?  When he gets to the display of the paintings, though, he claims that they are all forgeries.  Is Picasso lying to try to stop the sale?  Might the forger de Hory that we met earlier in the film have some connection to these paintings?  And what is the connection of Oja Kodar to Welles himself?

As Welles says at the beginning while doing a couple of magic tricks, the audience enters into an agreement to be tricked when viewing a show.  In fact, they go precisely because they want to be tricked; that that’s part of the entertainment.  People want the myth, not the reality.  People want there to be a newly discovered work by a famous painter.  People want to know more about the “crazy” Howard Hughes.  People want to see movies to take them away from reality.  With that in mind, how much of the entire film from Welles is trickery?  Oh, he admits to some made up pieces at the end, but I was left wondering about the other parts that were supposedly true.  And this is what made me enjoy the movie even more.

F for Fake is not the kind of movie you watch with one eye on the screen and one on your texting.  You should pay attention while you watch it.  See if you can figure out what is fake and what is not.  This film was “meta” long before anyone had ever coined the term.  Unless you want your movies to be numbingly straightforward then I highly recommend this film.