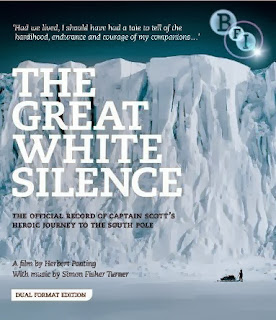 One of the things that older movies do is give us a window into the past.  Sure, we may not think of that while we are watching them, but on some level we appreciate them because they have forever captured something that no longer exists.  It may be the youth and vitality of a performer, how the social mores of the time impacted the stories, or in the case of the documentary The Great White Silence, the real life 1911-1912 Robert Scott expedition to attempt to be the first to reach the South Pole.  While watching this it was impossible for me not to marvel over the fact that I was seeing things that happened more than 100 years ago on .  Combine that with an absolutely pristine restoration and I enjoyed this film quite a bit.


I realize that not everyone will know about the Scott expedition and whether it was successful or not, but I have to balance this piece of history with my ability to discuss how this film came to be.  With that in mind I will be discussing the outcome of the expedition in this post.

First things first: even though this is a 1924 film, all of the footage was shot in 1911 and 1912 by Herbert Ponting.  He originally accompanied the expedition to shoot film and stills for Scott to later be used as part of a lecture series that the explorer planned when he got back to civilization.  When Scott failed to make it back alive, Ponting was left with all this footage.  He eventually put together this film that he tried to market, but it was not a success at the time.  He died without ever seeing people truly appreciate it.  It was the recent restoration that finally helped earn people’s admiration and respect.

The film breaks down into three sections: the preparation and arrival in of the expedition; the various local fauna that Ponting filmed while waiting for Scott to start his trek, then the attempt to reach the South Pole itself and the tragic results.

The first section shows some simply stunning images of icebergs as the ship travels to the base camp in .  It also shows how Ponting captured some of the images by hanging onto a precarious perch off the side of the ship as it traveled through frigid waters.  This was not a man who took it easy.

The second section has some fascinating images of killer whales, seals, skuas, and penguins as they go about their lives, and in the case of the penguins, as the humans interact with them.  Ponting does anthropomorphize during this piece, such as referring to a penguin and his bride, but back then this was a common approach to animals and it didn’t bother me anywhere near as much as the ridiculously over the top use of it in March of the Penguins (2005).

The third section is a combination of footage shot ahead of time and still photos taken by the Scott expedition.  Ponting did not accompany Scott to the South Pole.  He filmed them as far as a glacier.  In order to continue to have footage, he had shot them ahead of time pulling a sled, setting up a tent, getting ready for bed, etc. – all tasks they would perform on their quest.  Ponting intercuts these clips with passages from Scott’s journal and the photos Scott took.  As history tells us, Scott found that the Norwegian Roald Amundsen had already arrived at the South Pole before him and planted his country’s flag there.  Scott and his men then tried to make it back, but hemmed in by a storm they died only a few miles from a cache of food and supplies.  The passages from Scott’s journal as he documents the loss of life are moving.  For instance, one injured man simply walked away from the expedition to sacrifice himself since he knew he was slowing down the rest from possibly making it back alive.

All of this would be interesting footage, and for people not familiar with the history it would also be informative, but that it not what ultimately makes this a film well worth seeing.  What does is that on top of everything else, the 2011 restoration that was done on this film resulted in what may be the single cleanest and clearest silent film I have ever watched.  Every ridge of an iceberg is clearly delineated.  Every bird, every rock, every wave is as clear as if it was shot today.  It boggles my mind that this crisp footage is not only more than 100 years old, but also shot in – a place with weather not exactly beneficial to the inner workings of a primitive movie camera.

To my mind, this is one of the better additions that was just made by the 2013 edition of the 1,001 Movies list.  It captures an age of exploration that is long gone, as well as the people that were involved.  It also is amazingly clear and crisp in its imagery.  Unless you can’t stand documentaries, I highly recommend this film.