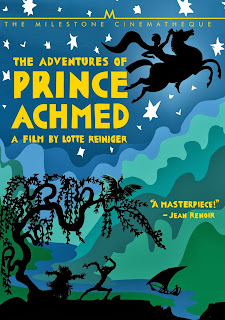 I first became aware of the film The Adventures of Prince Achmed after I saw Harry Potter and the Deathly Hallows Part 1 on DVD in 2011.  One of the best parts of the latter film was a three minute long animated sequence that tells the tale of three brothers who encountered Death, and the three items (the Hallows) that they received from him.  The style of the animation was quite unique to me and I looked into it some after I had watched the film.  Even though it was done via cgi, I learned that the silhouette style of it was heavily inspired by the oldest surviving full length animated film – the aforementioned Prince Achmed.  I made a mental note to track it down sometime, but when the latest edition of the 1,001 Movies You Must See Before You Die included The Adventures of Prince Achmed I bumped it up to the top.  I’m very happy that I watched the film.  It’s far more than just a historical curiosity; it actually manages to convey emotions and to generate a feeling of adventure, peril, and wonder in the viewer.

The story is inspired by the 1,001 Arabian Nights, but is not directly based on any specific tale.  An evil sorcerer comes to a kingdom and decides he wants the princess of the land.  Her brother, Prince Achmed, is tricked into mounting a magical horse the sorcerer created.  It can fly, and not knowing how to control it, Prince Achmed is whisked away.  After some time he finally does figure it out and he comes down on an island.  There he spies the beautiful Pari Banu and a couple of her handmaidens.  He takes her with him when he leaves, but the sorcerer, who has been keeping tabs on Achmed, interferes once again and kidnaps Pari Banu and gives her to the Chinese emperor.  Achmed travels to to rescue her, but the sorcerer is always going to be a problem, not to mention the demons that control the island Pari Banu is from.  Along the way Achmed meets a witch, who is the mortal enemy of the sorcerer, and Aladdin, who has had his own troubles.  Achmed, Aladdin, and the witch combine forces to try to stop the sorcerer and the demons from killing Pari Banu, marrying Achmed’s sister, and stealing Achmed’s kingdom.

I used the term “oldest surviving full length animated film” in the first paragraph.  There are records of two films made in prior to this, but both are assumed to be lost.  And there were animated shorts, such as 1914’s Gertie the Dinosaur that also preceded it.  The Adventures of Prince Achmed was a huge step forward, though.  In addition to proving that a full length animated film could be produced and shown, it also brought the concept of silhouette animation to the public consciousness.  Creator and director Lotte Reiniger had started experimenting with this style of animation while still in her teens and had produced her first short by the age of twenty.  She did more shorts over the next few years, but she and her cinematographer husband Carl Koch decided on a very ambitious task – a full length movie.

From 1923 to 1926 the two worked tirelessly, sinking almost all their money into the endeavor (and money was a scarce commodity in post WWI Germany.)  The two also had to invent new ways to film the animation – building an apparatus that was several feet tall that looked directly down through multiple plates to give their film a sense of depth.  If you get the DVD of this film, make sure to watch the 2001 documentary Lotte Reiniger: Homage to the Inventor of the Silhouette Film that is also included on it – or at least the section dealing with the creation of Prince Achmed.

Now we come to the animation itself.  Reiniger literally cut every single object seen in this 65 minute film from paper.  For anything that had to show motion, such as arms and legs, she connected sections with thread through holes and moved each section separately.  She didn’t just stop with the basics, though; she also had heads, wrists, ankles, even fingers that would move independently.  And these were not just crude forms; she cut many beautifully detailed silhouettes.  I was blown away by the intricacy of some of them.  And all this detail doesn’t just make it prettier; it allows the characters in the film to be much more expressive, thereby making the story have a greater impact on the viewer.

Here is a short example of the animation in the film.  It is the scene where Achmed first meets Pari Banu.  Please note that this clip is not in the best condition and that the film has since been restored so that it has a much sharper presentation.  The few intertitles in this clip are in German, but they are not essential for viewing the animation itself.


When The Adventures of Prince Achmed was finally complete, Reiniger and Koch received a big boost from up and coming French director Jean Renoir.  He arranged for the film to make its public debut in in the summer of 1926.  It was shown in many European locations for the next few years, but Reiniger and Koch did not become rich from it.  And when the global Depression hit in the 1930s they had a very difficult time.  Although the two continued to produce silhouette animations – mostly shorts – they faded from public consciousness.  It wasn’t until the 1970s that the film The Adventures of Prince Achmed was rediscovered.  This led to renewed fame for Reiniger, who was retired and living in .  With new interest in her work, she created two more shorts in the late 1970s before passing away in 1981.

As I said at the top The Adventures of Prince Achmed is far more than just a curiosity, and even more than just a piece of cinema history; it is an engaging film.  It is silent, so if you have never seen a film like that it might take some getting used to.  The score does a good job of embellishing the story.  It is also German so when intertitles appear you will have to read a few subtitles, but even someone who hates reading will not have to spend much time at all doing so.  Unless you simply refuse to see a silent film, or you stubbornly insist that animation is only for kids, then I highly recommend this film.