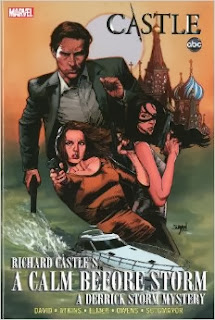 To date there have been six novels published under the author’s name of Richard Castle – the fictional character on the TV show Castle.  When the show opened Richard Castle was the popular author of a series of thrillers that all had the main character of Derrick Storm.  During the course of the show we have seen the Castle character write the five Nikki Heat novels, which are based on the Detective Beckett character, and a new Derrick Storm novel.  What about all those old Derrick Storm novels that are supposed to already exist?  The people involved with the show decided to do “adaptations” of these books in the graphic novel format.


Unlike the Nikki Heat books, whose author remains a mystery, the first two graphic novels were written by Brian Michael Bendis – a much respected writer in the comics world.  At 112 pages these graphic novels are actually quite thick by the standards of the industry.  The first to be “adapted” was Deadly Storm, which introduced the Derrick Storm character and how he came to work part-time for the CIA.  The second was Storm Season in which P.I. Derrick Storm once again gets tapped by the CIA for a case, and where he learns that agent Clara Strike had faked her death.

Like the first two books, A Calm Before Storm has additional pages of artwork, as well as synopses of all of Richard Castle’s books.  Unlike the first two, there is no introduction from “Richard Castle”.  There is one other big change: the author of this “adaptation” is Peter David.  He started out in the comics world and has expanded his writing to just about every medium, be it original novels (Sir Apropos of Nothing is highly recommended), adapted novels, movies, and TV shows.  He also continues to write in the comics field to this day.  David keeps the tone of this book similar to that of Bendis, who was himself intentionally writing in a Castle-like style.  As has happened with the first two books, there is a third new artist on this one.  The style is relatively consistent with the prior two.

When A Calm Before Storm opens, there have been big changes in Derrick Storm’s life.  He has sold his detective agency to a famous P.I. to the stars who has had his own exploits turned into a TV show titled “Palace”.  There is a full page illustration that exactly copies the DVD cover to Castle Season 3.  Storm has taken the money and bought himself a yacht.  He’s going to kick back, relax, and maybe see the world with his father who is a retired FBI agent.

As you might expect, other events intercede.  Storm finds a head floating by his boat.  It turns out to be a Russian diplomat with a swastika carved into his face.  This brings the CIA back into the picture, including Storm’s handler Helen Pierce.  She tells him to leave this one alone.  When Storm’s father arrives, he tells his son the same thing.  Storm can tell his father knows more than he’s letting on, so once everyone has finally cleared out he gets the truth from his dad: the man responsible for leaving this head is an old adversary of the father.  In fact, he is responsible for the death of Storm’s mother when he was a young child.  The father had told him his mother had died in a car crash because he didn’t want his son to grow up with a hole inside knowing the killer was still out there.  The father kept that for himself, and come hell or high water, he’s going to finish things now.

Agent Pierce soon learns all of this when more Russians and Germans start dying, escalating tensions between the two countries.  Storm and his father get caught right in the middle of it.  She takes their passports away from them to keep them from following the trail to .  That leaves Storm with only one option – one he hoped to never use.  He has to ask Agent Clara Strike for help.  Storm still hasn’t gotten over the fact that he thought the woman he loved had died, only to find out later that the CIA faked her death.  Now he’s got to learn to trust her if the mission he and his father need to go on can be successful.

All in all, this is a good expansion of the character and his continuing adventures.  It shows that not everything will necessarily be a CIA assignment, but rather might stem from Storm’s own investigations.  This gives more flexibility for future stories.  According to the synopses there are eleven Derrick Storm novels in all (twelve now, actually – more on that in my next post), so we may see eight more of these graphic novels.  If they are as entertaining as the first three, then I look forward to them.
Posted by Chip Lary at 9:41 AM