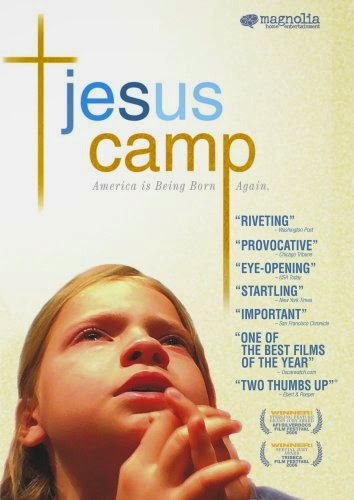 Jesus Camp is a documentary about how fundamentalist Christians in the U.S. ensure they get their message to as wide a range of children as possible.  As Aristotle wrote, “Give me a child until he is seven and I will show you the man.”  The primary adult focused on in this movie is a firm believer in this.  She draws parallels with how some Muslims will train children from the time they are young to groom them to be suicide bombers and how guerillas in Africa will turn children into soldiers.  From her perspective, she is trying to turn these children into the future generation that will ensure the country “returns” to the Christian values she believes it has gone away from.  The result is a sometimes disturbing look at the methods used.  Steve called it one of the scariest documentaries he had ever seen.


First things first, every single person will see this through the prism of their own religious beliefs (or lack thereof).  When someone asks me about my beliefs I simply say “I am not religious”.  Some people press the issue, though.   (My favorite is “But you believe in God, right?”  Uh, no, that would make me religious, wouldn’t it?  Sometimes just to see their reactions I respond “Which god?  There are many of them according to various books.”)  So I went into this movie as a person very far removed from the people who appear in the documentary.

It’s obvious right from the beginning that the documentary makers are intending to shock the viewer with actions that they consider extreme and possibly even dangerous.  Now and then the doc cuts to a radio talk show person who is cast as “the reasonable Christian” who is there to obviously present the views of the filmmakers.  Despite this, the doc is relatively balanced for what it is.  Things are presented in a reasonably straightforward way.  I’m sure that some people will see the actions of the fundamentalist Christians as perfectly understandable.  Others will find them scary and reprehensible.  It all goes back to the prism I mentioned earlier.

The film follows three children, all about 10-11 years old, as they attend various events and sermons.  The main component of this is a summer camp where both children and parents can attend.  This is run by a woman named Becky Fischer.  She is the adult who is focused on the most.  At these events the children are sometimes brought to tears through fear of the evil they are told is out there, or by their own intense emotions from what they are told God feels about them.

One thing that struck me is that regardless of what you feel about what Fischer is telling the children, you have to give her her due – she does an excellent job at communicating with the kids and getting them excited about something that can be incredibly dull.  One of the children even talks at one point about how exciting it all is vs. other times she has been in church and everyone just sits around silently.  Fischer also does a very good job at getting the children to take the initiative, to get up in front of the other children and, in essence, preach to them about God.  I was sitting there thinking of how much benefit these children could receive if she focused her efforts on education, rather than ministering.

One of my biggest problems with organized religion (as opposed to personal faith) is the hypocrisy shown by so many that attain positions of leadership.  They seem far less interested in faith and far more interested in money and power.  I have to say that Fischer at no point struck me as someone who was in it for the money, the fame, or anything else.  She is far from well-dressed, and the camp is somewhat rundown (to the point that she prays to God to bless just about every aspect of the building, including the electrical system to not fail during her PowerPoint presentation.)  She seems like she truly believes that she is bringing these children closer to God and if she can ensure they are advocates for their religion as adults then maybe they will in turn convert or “save” even more children.  As I said earlier, if you share her beliefs then her actions in this film will seem perfectly reasonable.

I do not share her opinions on most anything she says or does.  There were a few times where something struck me as funny when it wasn’t supposed to (or at least the person I found funny did not intend it to be; maybe the filmmakers did.)  The PowerPoint blessing was one of them.

Overall, this doc didn’t show me too much that I was not already aware of in regards to grass roots efforts by fundamentalist Christians to gain power and influence in this country.  For years they have been working to get elected to school boards, which is why we periodically get various towns, and sometimes even states, insisting that Creationism must be taught in schools if evolution is.  (See also the 2012 doc The Revisionaries.)

One thing that did strike me is that the adults can keep the children completely in a cocoon where they only get to hear and see what the adults want them to.  There are customized videos about how the Earth is only 6,000 years old, textbooks teaching them how global warming is wrong, movies about how God’s true chosen will save the world, etc.  By homeschooling their children (the doc claims 75% of all homeschooled children are in fundamentalist families) they can ensure that their kids never hear an opposing viewpoint until they are adults themselves.  You might think that once they get to college they would finally get some real world knowledge, but even then there have been several fundamentalist Christian colleges founded purely to allow parents to continue to ensure their children never have to consider a position other than their own.

I used to work with a man who had his wife homeschool their two daughters purely because he did not want them being taught about evolution.  He felt he was being very reasonable and open minded by saying that he was fine with evolution being taught to children in schools as long as Creationism was, too.  I told him I have no problem with Creationism being taught in schools (pause as a look of surprise came over his face) I do however have a problem with it being taught as science.  Seeing as it violates the very precepts of what science is (that unreproducible supernatural events can occur) then it belonged in a theology class.

Jesus Camp is short (85 minutes), but it gets its point across.  It was nominated for an Oscar for Best Documentary (losing to An Inconvenient Truth).  The footage for it was shot about ten years ago now.  It made me wonder what these three children are now doing.  Did they keep their faith?  Did they turn away from their teachings?  According to responses on the IMDB boards, which may or may not be true, one of the boys is still a true believer, while the other is not.  The main girl was not mentioned.

If you have been mostly oblivious to the efforts of fundamentalist Christians to gain power and influence choices then you should definitely see this film.  If you’re already aware of it then there may not be too much new in this.  If it sounds interesting, though, then I recommend you give it a try.