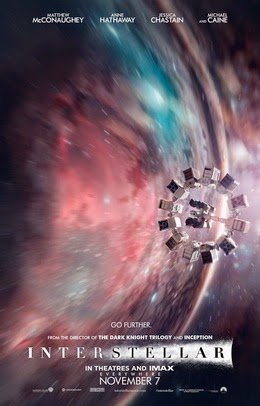 If you go to IMDB.com you will find Christopher Nolan’s films to be rated far beyond all reason.  There is actually a group of people who tirelessly work through thousands of accounts they have set up to rank all his movies as high as possible (and to rank competing films such as The Avengers as low as possible).  The result is that seven of the eight films he has directed since hitting the public consciousness with Memento (2000) are not only in the IMDB Top 250 list, six of them are in the Top 100, and three of them are in the Top 25, including Interstellar at #23.  While Interstellar is far from being the 23rd best movie ever made, it is good enough to take the last spot on my Top 10 of 2014 list.


It’s obvious that Nolan wants this to be his 2001: A Space Odyssey.  There are many parallels between the two films, not the least of which is hiring a noted person to try to ensure everything was as scientifically accurate as possible.  (There are a few places in Interstellar where dramatic license won out over scientific accuracy, but most people won’t notice them.)  For 2001 it was author Arthur C. Clarke.  For Interstellar it’s physicist Kip Thorne.  For anyone who saw the 2014 film The Theory of Everything Thorne is the man Hawking loses a bet to and therefore has to subscribe to Penthouse magazine.

Interstellar clocks in at a little less than three hours long.  There are some places where trims could have been made, most notably during the 40 minutes leading up to the start of going into space, but I wouldn’t say too much should be cut.  It would probably still be at least two and a half hours long if there were to be a “Tips from Chip cut”.

The film is set in the near future.  There have been multiple diseases that have wiped out basic crops that humanity relies on.  About all that is left that grows is corn, but the over-farming of it is turning the land into a dustbowl.  Humanity probably only has another couple of generations before they will die out.

Amidst this is Cooper – no first name, just Cooper – played by Matthew McConaughey.  He is a former astronaut and engineer who has now become a corn farmer since society has turned its back on space.  His wife has already died from one of the human diseases that went around, so he is a single dad raising his son Tom (Timothy Chalamet as a teenager; Casey Affleck as an adult) and his daughter Murph (Mackenzie Foy as a girl, Jessica Chastain as an adult, and Ellen Burstyn as an old woman.)  Also living with them is Cooper’s father-in-law Donald (John Lithgow).  The sequel to 2001 was 2010, which co-starred Lithgow, so this is another reference.

Murph is very close to her father.  She takes after him more than Tom does.  She believes she has ghosts in her room, what with books falling off her shelves and other strange things happening.  Cooper finally figures out that somehow gravity is being manipulated and it is actually a message.  He follows the coordinates to a secret NASA base where a launch is being prepared.  A wormhole has been found out near Saturn, probes detected three possibly habitable planets on the other side of it, and years ago three astronauts were secretly sent through to explore them.  This will now be a follow-up mission to reconnect with those astronauts and see what they found.  If one is habitable then Plan A is to send as much of humanity as possible through the wormhole to colonize them and save the species.  If Plan A isn’t feasible then Plan B is to send genetic material through and new humans can be cloned from it.  Everyone on Earth will die, though.

Being a former astronaut Cooper is asked to pilot the mission.  He accepts, but when Murph finds out he will be gone for years she is distraught.  He tries to make her feel better by joking that when he gets back the two of them might be the same age, but this backfires.  (The film explains the effects of time dilation from a nearby black hole, as well as a cold sleep process that slows down aging.)  The gist is that while Cooper will experience a couple of years being gone, the people he leaves behind will experience decades.

Along on the mission are specialists Amelia Brand (Anne Hathaway), Doyle (Wes Bentley), and Romilly (David Gyasi).  Also onboard is a robot named TARS that looks suspiciously like a miniature version of the monolith from 2001.  For the most part this is not cgi, but rather a practical effect.  Actor and puppeteer Bill Irwin moves the robot and provides its voice.

When they get to the other side of the wormhole they have to make a decision on which of the three planets is the most promising, based on the feedback they have received from the astronauts.  Here is where my biggest negative with the film comes in.  The first world they choose can only be justified by all four of these brilliant people being incredibly stupid about the effects of time dilation and what this means about the messages received from the astronaut who went there – right after they just got done discussing it amongst themselves so that the viewing audience would understand it.  They realize their mistake only when they reach the surface of the planet and by the time they get back to the ship, decades have passed on Earth.

We see Murph and Tom as adults.  Tom is trying to run the farm, while Murph has become a scientist and is working for the same place that launched the mission.  In small roles are Michael Caine as Professor John Brand (Amelia Brand’s father and Murph’s mentor) and Topher Grace as a love interest for Murph.  There is also an appearance from a well-known actor as one of the astronauts who had been sent through the wormhole first.  The makers of the movie took great pains to keep his participation a secret, so I will not name him here, either.

Without spoiling how or why, Cooper ends up in his own quasi 2001 ending, which then explains events back at the beginning of the film.  It’s visually interesting, but it goes on too long.  The viewer gets what is happening and what it meant for the beginning of the film after a scene or two.  We didn’t need to see every single unexplained event from the beginning re-enacted and explained. A little bit of trimming could have happened here.

Despite my problems with the section of the film where they choose the first planet, and the somewhat overextended opening and closing, the rest of the movie hits all the right spots.  There are several places where it is emotional, especially when it comes to the Cooper/Murph relationship.  All three of the performers do good jobs with this, especially McConaughey.

While Memento remains Nolan’s best film, Interstellar is certainly worth consideration as his second or third best, depending on how you rate Inception (2010).  I would advise trying to ignore all the hype (and backlash) about both Nolan and his movies and just sit down to watch this.  Unless you feel the running time would be too long, I highly recommend this film.