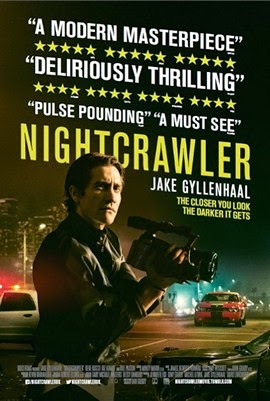 When the Oscar nominations were announced in January the film Nightcrawler was one that I would sometimes hear mentioned as having been “robbed” (although it did get one nomination for Best Original Screenplay).  Of course, every year there are some films that have passionate supporters that feel exactly the same way when their personal favorite does not get nominated so I didn’t pay too much attention to that.  I do try to see as many Oscar nominated films as I can.  And I did make a mental note to see this movie before doing my Top 10 Films of 2014 list, just in case its supporters were onto something.  I am glad I did because this did make my Top 10.  Nightcrawler turned out to be a great movie not just for its story, but also for the lead performance of Jake Gyllenhaal.


Although never stated in the film, Louis Bloom (Gyllenhaal) is what a pop psychologist would probably call a high functioning sociopath.  He’s just a little “off” when interacting with people, spouting maxims you might find on inspirational posters when trying to make small talk.  It’s as if he’s studied what people respond to and is attempting to use those techniques to ingratiate himself among them without understanding exactly why those words would have the impact they do.

We first meet him as a petty thief stealing metal fencing to sell for scrap.  He has no compunctions about knocking out a security guard to do this.  He tries to get a job with the scrap dealer, who refuses.  On the way home he witnesses a car accident and pulls over.  We get the feeling it’s not to help, but to satisfy a fascination with the event.  Soon a van pulls up with a couple of camera guys inside.  The leader of them is Joe Loder (Bill Paxton), an experienced “amateur news journalist” who rushes to the scenes of accidents to get footage which he then sells to the local morning news shows.  “If it bleeds, it leads” is not just a cliché, but a way of life for them.

Bloom is immediately taken with this whole concept.  He steals a bike, trades it for a police scanner and cheap video camera, and he now tries to insert himself into this world of opportunistic news.  Of course, the veterans aren’t exactly happy to see him, and he’s not very good at first because he doesn’t even know what’s important.  He manages to make a contact at a local station, producer Nina Romina (Rene Russo), who pays him a little bit of nothing for some footage he brings in.

She explains to him what footage is the best – suburban, white neighborhoods with break-ins, murders, etc – anything that will make the middle class feel scared.  Car accidents are “good” too, but they don’t bring in as many eyeballs.  Crimes in lower class, ethnic neighborhoods don’t sell at all.

Bloom gets himself a partner named Rick (Riza Ahmed) who he cons into working for free as part of an “internship”.  Soon Bloom is selling all kinds of footage because he’s willing to show things others won’t and to go places others will not.  He’s making a ton of money, as evidenced by the nice new car and cameras he suddenly is using.  It’s not long before Bloom is rearranging a dead body at a car accident in order to get better footage.  He also gets to a scene with a crime in progress and withholds footage that would allow the police to identify some killers – all so he can be in the perfect place to film the police when they arrest them after he gives them an anonymous tip.

He shows himself to not only be a fast learner here, but also in the news business.  We find that he selected Nina for a reason – she has never held a position more than two years, her station has the lowest rated morning news, and her contract is up for renewal soon.  Bloom’s footage is suddenly making her a player to be reckoned with.  He knows this and does not beat around the bush: he wants a sexual relationship with her or he will start selling his footage to another station.

Naturally she is not happy about this, but her ambition wins out.  This leads to my only real criticism of the film: it’s never really made apparent, except in a passing reference that is easy to miss, if she does agree to this deal or not.  There is never any kind of sex scene shown between the two.  They never even kiss.  This seemed quite strange to me, but I found out afterwards that writer/director Dan Gilroy is married to Rene Russo in real life.  Apparently his role as a husband overrode his role as a writer/director and he didn’t want his wife to even touch the more handsome and much younger Gyllenhaal.  The film suffers a little bit for this.

It’s not surprising that would make this decision, though, because this is the first film he ever directed.  He has been a screenwriter for quite a while.  In fact, 1992 was a great year for him because he married Rene Russo and his first produced screenplay came out in theaters as the film Freejack.  He sold one other screenplay for the not very good Chasers (1994) then went for more than 10 years before having another film he wrote get released.  And none of those later movies (i.e. Real Steel, The Bourne Legacy, etc.) gave any indication he had a story like Nightcrawler in him.

I feel this film, and Jake Gyllenhaal, did not receive Oscar nominations because the subject matter made the Academy members a little too uncomfortable.  It shines a bright light on the fact that these kinds of people and events are kept alive by the very audience who tunes in to be shocked by the news – which is probably a lot of the Academy members.  In many ways the overall story is like Network and Gyllenhaal’s character has more than a bit of Kirk Douglas’ Chuck Tatum from Ace in the Hole in him, with a little Travis Bickle from Taxi Driver thrown in for good measure.

Bloom is not in any way, shape, or form a good guy, yet I still found myself fascinated by him and almost wanting to see him “win”, even though winning meant getting even dirtier than his competition.  As he says about himself at one point, “If you’re seeing me then you’re having the worst day of your life.”  There’s no one that he isn’t willing to exploit in order to do what he is doing.

Nightcrawler has a great story and a great performance from Jake Gyllenhaal.  He inhabits a character who will likely stay with you after the film is over.  Because of the nature of what he is doing, there are violent scenes in the movie.  Unless you just cannot stand to see anything like that then I highly recommend this film.