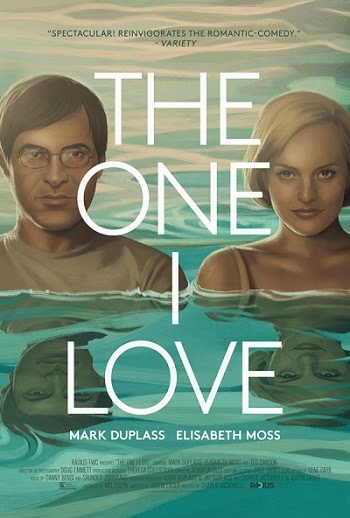 I saw the film The One I Love just before finalizing my Top 10 Films of 2014 list.  I’m glad I did because this movie ended up making it onto it.  It’s another small independent film starring Mark Duplass.  In recent years I’ve come to keep an eye out for his movies that fall into this demographic because he seems to be able to pick films that are better than average (i.e. 2012’s Safety Not Guaranteed, 2011’s Your Sister’s Sister.)  In this case the Netflix Instant description didn’t exactly sound that interesting, but I gave it a try anyway just on faith.  I was glad I did.  This is a film that went in completely unexpected directions.


And herein lies the problem I have with writing this review: the more I describe even the basics of the plot, the more I would spoil what makes it so great.  I’m not going to do that since this is definitely a situation where the less you know, the better it is.  I will write as much as I feel I can regarding this, but no more.  I’m afraid you may have to take it on faith that you might also really like this film.

First, here was the Netflix Instant blurb that I mentioned didn’t sound that exciting: “Confronted with the potential end of their marriage, Ethan and Sophie take off for a weekend together, hoping to negotiate their future.”  I can give you a little more than that.

Ethan (Mark Duplass) and Sophie (Elizabeth Moss) are seeing a marriage counselor.  The sticking point is that she believes he cheated on her, and she feels that she simply can’t trust him any longer.  The counselor (Ted Danson) realizes he has reached an impasse with them and suggests something he only rarely does, but that has always worked in the past.  He owns a rural vacation home in an idyllic setting.  In the past he has sent similar couples to it for a weekend and they have always managed to rekindle their marriages.  Although not that enthusiastic, Ethan and Elizabeth both agree to try it.  We get the sense that each may have only done so because they didn’t want the other to be able to point a finger at them and say they weren’t trying to save the marriage.

When they arrive they do have to admit that it’s beautiful.  In addition to the house itself, there is also a guest cottage on the property.  They find a journal with written testaments from other couples who have been there and they are all quite positive.  In spite of themselves Ethan and Sophie seem to be thawing a little towards each other.

And here is where I cannot go any further on the plot.  All I will say is that I was very pleasantly surprised with where it went and I never would have predicted that direction.  I will tell you that after you have seen this movie go back and look very closely at the movie poster image above.  (The image, not the blurb on it - this definitely isn't a romantic comedy.)

The film was directed by Charlie McDowell.  He is the son of Malcolm McDowell and Mary Steenburgen (who is now married to Ted Danson).  That’s why Danson appears in the film in a small role.  In addition, Steenburgen has a voice cameo.  Finally, the property with the house and guest cottage on it is actually Danson’s and Steenburgen’s own home, so that helped keep the budget down, too.

Both Duplass and Moss do good jobs with their roles (and the plot makes their jobs even more difficult as you’ll come to understand if you watch it.)  The entire movie mostly consists of just these two performers, so they have to carry the whole thing.  I read afterwards that much of the dialogue was adlibbed, which surprised me.  Usually you can tell when this happens because the performers have slight pauses between their lines.  I didn’t really notice anything like that in this movie.

In case the name Elizabeth Moss is not familiar to you, she has been on the TV show Mad Men for several years in the role of Peggy Olson.  Smoking fetishists who watch Mad Men will not be disappointed by this film.  It establishes its “Indie cred” early on with two completely pointless scenes of Moss smoking by herself.  Nothing happens in either scene, so it’s as if the movie itself is taking a couple of smoke breaks for fans of that.  The strange thing is, after these two early scenes, she is never shown smoking again for the rest of the 90 minute running time.  They might as well have just shown her sniffing her armpits for a minute and it would have contributed just as much to the overall movie.  This is a very minor quibble from me, and as I mentioned, there are some people who will find it to be a real positive.

I do admit to being surprised by how many people have posted on IMDB’s message board for this film with questions on the ending – both people who didn’t understand it, and people who completely misunderstood it.  Please don’t let this deter you; it’s quite easy to follow what’s going on if you set down your phone and actually watch the movie.  And by no means should you go out to this movie’s boards prior to seeing it since they will spoil everything about it.  Don’t even watch the trailer for the movie.  Seriously.  I’ll say it again: the less you know going into this one, the better.

Unless my rather mysterious descriptions of this movie have turned you off then I highly recommend this film.