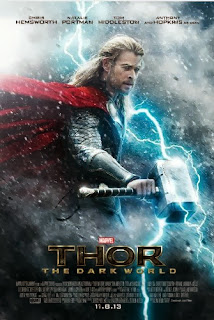 Thor: The Dark World does not really fit into the spirit of this Evil Doctors and Mad Scientists category that I am currently doing, but it was so entertaining that I wanted to write about it now instead of weeks from now.  And it does literally have a “mad scientist” in it: Dr. Erik Selvig (Stellan Skarsgard) is much the worse for wear after the events of The Avengers (2012).  Having had Loki in his head for so long has left him a little bonkers.  He’s raving about “convergences” and such.  But is he mad, really?

This film is a worthy successor to The Avengers.  It is definitely better than the first Thor film and I would rank it just below The Avengers and equal to Iron Man (2008) in regards to the best Avengers-related films.  Joss Whedon’s hand is definitely on display. No, he didn’t write or direct this film, but Marvel has placed him in charge of all of their Phase 2 films, which are the post-Avengers ones.  I detected some definite “Whedonisms” in this film and it is the better for them.


After the events of The Avengers Thor (Chris Hemsworth) and Loki (Tom Hiddleston) return home.  Odin (Anthony Hopkins) orders Loki to be imprisoned for the rest of his life – which is thousands of years for Asgardians.  Odin’s wife Frigga (Rene Russo) is distraught over what her son has done.  Thor is missing Jane Foster (Natalie Portman) even as he is helping Lady Sif (Jaimie Alexander) and the Warriors Three (Zachary Levi as Fandral, Ray Stevenson as Volstagg, and Tadanobu Asano as Hogun) fight across the nine realms, putting down the evil that Loki’s actions triggered.  They have just about secured peace when an ancient threat arises.

The film opens with an explanation of how Odin’s father defeated the Dark Elves – beings who existed before there was light in the universe.  They wanted to extinguish that light, so Odin’s father had to stop them.  Their leader Malekith (Christopher Eccleston) got away, though, even though his weapon – the Aether – was taken from him.  The Aether cannot be destroyed so Odin’s father orders it hidden in the furthest depths of the nine realms.

Back on earth Jane Foster, her intern Darcy (Kat Dennings) and Darcy’s new intern Ian (Jonathan Howard) are tracking signals similar to what happened in in the first film.  They discover that there are portals between the worlds and Jane accidentally gets sucked into one.  As luck would have it, it’s where the Aether is kept and it takes possession of her – “infecting” her.  She returns to Earth, but Thor comes to her because she disappeared from even Heimdall’s (Idris Elba) sight.  Thor recognizes she needs help and brings her back to Asgard.

Jane now has the Aether with her, so Malekith awakens and attacks Asgard to get it.  He is driven off, but not before dealing a fatal blow to Asgard.  Thor must find him and there is only one person he can turn to for help – Loki.  Even though he shares Thor’s goal, can he be trusted?

This film is very cosmic in scope, although there are major sections, including the climax, that are on Earth.  In fact, there were times when this felt like it was The Lord of the Rings meeting Star Wars because of the Dark Elves, armor, swords, etc. along with energy weapons, flying ships, and the attendant sound effects.  I’m sure that director Alan Taylor – an Executive Producer and director for the HBO show Game Thrones – used his experience from that on this film, too.

I was happy to see the humans, including Selvig, Darcy, and Ian, getting to play important roles in the film.  I figured they’d make cameos at the beginning and then everything else would occur on Asgard.  That was not the case.  This film is also quite huge in scope, with the fate of the entire nine worlds in the balance.

Despite that scope, the movie does an excellent job of giving all these separate characters enough time on screen to shine, with one exception.  It helps a lot that they have all been introduced in prior films.  This does mean that you should have seen both Thor and The Avengers before watching this, though.  They recast Fandrall because of the original actor’s inability to free up his schedule, and Hogun barely appears.  I’m assuming that the actor had a conflict with his other film 47 Ronin (2013) and his time on the Thor set was therefore limited.

I’ve read that the TV show Agents of SHIELD will have a tie in to this film.  There are two things that happen where I can see follow-up could be needed by Coulson’s team.  One of them occurs in an after credits scene.

Once again, people started walking out the moment the credits started.  You’d think after however many films that they would learn that there is going to be a scene after the credits.  In this case there are two.  Like with The Avengers there is a mid-credits scene that introduces another cosmic character from the Marvel universe.  Comic book readers will recognize him.  Benicio del Toro cameos as this character.  After this scene, most of the rest of the theater then walked out, leaving just a handful of us to see the two scenes that played after all the credits were done.  In addition to del Toro, there is also a cameo by one of the other Avengers characters, and it is quite funny.  The whole audience was laughing.

That brings me to my final point: this movie has some really fun moments in it.  There is definitely more humor than the first Thor film, but it is not an action comedy.  Balancing this off is the fact that not everyone you know makes it through the film alive, or unharmed.  This feels like another Whedon touch.  And there is a terrific reveal in the scene right before the credits start to roll.  I was half expecting it, but it was still great.

So, if you were already going to see this film, then why are you sitting there reading this?  Go see it.  If you liked The Avengers, but were unsure about this one, then you should definitely see it.  I don’t give half star ratings, but if I did this would be 4.5 stars.  Unless you hate superhero movies in general, I highly recommend you see this film.