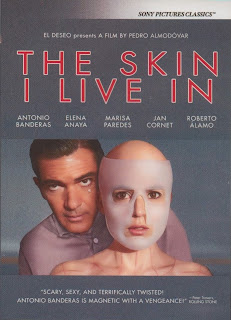 The Skin I Live In is a very interesting film from Pedro Almodovar.  It’s sure to surprise many, upset some, and maybe even traumatize a few.  It was nominated for the Best Foreign Language Film Golden Globe and won the BAFTA for Best Film Not in the English Language, beating, among others, A Separation (2011).  It was nominated for 16 Goyas (the “Spanish Oscar”), winning four of them.  It’s a film that may challenge you with the moral and ethical questions it raises, but it is definitely worth your time.


Antonio Banderas stars as Dr. Robert Ledgard, a brilliant researcher into helping burn victims recover.  He gives his best performance in years.  Anyone who just thinks of him as only an action star or a comic presence may be very surprised by him in this film.  Maybe his great performance is due to acting in his native language or maybe it’s because, like Penelope Cruz, Almodovar just brings out the best in him.  The first movie I ever saw Banderas in was Almodovar’s film Tie Me Up, Tie Me Down more than 20 years ago.  That was their fifth movie together, but after that Banderas came to and starting making English language films.  The Skin I Live In was their first collaboration in 21 years.

The film opens with a mysterious woman named Vera (the absolutely gorgeous Elena Anaya – Room in ) doing yoga in a large room.  She’s dressed in a bodystocking that covers her completely, except for her head.  There are tons of things drawn on the walls of the room.  When she opens a closet we see dresses – all of them torn.  She appears to use the fabric for some artwork she is doing.  Over an intercom and camera she asks a woman for some items.  While some are fine, she is refused a needle and scissors.  Is she a mental patient of some kind?

The woman she speaks with is (Marisa Paredes – All About My Mother), the head of the household and clinic staff there.  It turns out this is the home of Dr. Ledgard.  He has a small clinic in the building itself.  We first meet him giving a lecture on advances he has made in finding an artificial skin to help save burn victims.  It is even better than real skin in regards to protecting the patient.  He is obviously brilliant, but also driven and passionate about this discovery.  Another doctor there, though, confronts him about some disturbing implications for transgenic (genes crossing species) processes that might have been used, and whether or not it should even be considered for humans.  Dr. Ledgard assures him that this is just a passion of his in memory of his wife, who burned to death in a car crash.  It is not intended to ever really be used.

When Dr. Ledgard gets home he turns on a camera in Vera’s room and observes her.  She seems to almost sense when she is being watched by him and stares back right into the hidden camera.  He goes to her room and unlocks it, showing again that she is being kept there against her will, although is that for her protection or for others?  Ledgard examines her skin and pronounces that it is even better than he had hoped.  We now know he has been conducting experiments on her, in violation of the very thing the other doctor confronted him on.

One day ’s good for nothing son Zeca (Roberto Alamo) shows up.  He wants his mother to help him.  He knows she works for a plastic surgeon and he wants to escape from some crimes he has committed by getting a new face.  He suddenly sees Vera on the intercom screen and goes crazy.  He recognizes her as Dr. Ledgard’s supposedly dead wife.  He overpowers and enters Vera’s room.  We discover that it was Zeca who was the cause of the car crash that burned her to death, so he can’t understand how she is here.  Vera doesn’t know what he’s talking about.  Zeca goes crazy and attacks Vera, only to be shot and killed by the returning Dr. Ledgard.  tells the doctor it was a mistake to have made Vera look so much like his wife.  Now we start to realize some of the reason Ledgard seems more than a little obsessed with Vera.  We see that among other things this is also a Pygmalion story.  As the movie goes on we see that it is a Pygmalion story in two different ways – both modern and mythological.

We also start to learn some of the backstory: Ledgard’s wife didn’t die from her burns.  Through a heroic effort and the first attempts at this new skin of his he managed to not only save her life, but get her to start to recover.  She saw her disfigured appearance one day, though, and killed herself by jumping to her death – right in front of her and Ledgard’s daughter Norma (Blanca Suarez).  This sends Norma spiraling down into mental illness from which she only partially recovers.  One day at a party she meets Vicente (Jan Cornet) and they hit it off initially, but she and Vicente have a horrible misunderstanding which causes her mental illness to come back.

This is only the first half of the movie.  I won’t go any further because to do so would be to spoil what is a great reveal.  The movie actually shows us what is going on about an hour in with two dream flashbacks, but from comments I’ve read some people do not really grasp what is happening until later.  Maybe they do start to get it earlier, but subconsciously reject it because they do not want to go there.  Well, the movie does go there and it takes the viewer along for the ride.

I mentioned that Banderas gives a really good performance.  So, too, does Elena Anaya as Vera.  You don’t really appreciate what she does in the first half of the film because you don’t know what her character’s story is.  It’s really only on a second viewing, now knowing the truth, that you can really see how many little things she did in her performance that give subtle hints at what is going on.

The movie is not just about the reveal, though.  I mentioned at the top that it raises a number of moral and ethical questions.  Are Ledgard’s actions acceptable?  Understandable?  Do they perhaps start that way, but then get corrupted by his personal tragedies?  Do those personal tragedies excuse his actions?  We see a key event from two different perspectives.  Which perspective, if either, is the true one?  There are other questions, but they would get into spoiler territory.

This film could be disturbing for some people.  It’s not gory; it’s the concept of what is going on that may upset some.  Unfortunately, I can’t tell you what that is so that you can judge for yourself if you would be bothered or not.  It would ruin the entire reveal.  All I can say is that I highly recommend this film.