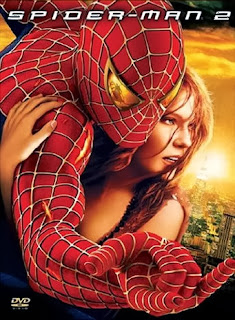 When Spider-Man came out in 2002 it was wildly successful.  I thought it was very entertaining and watched it more than once.  The questions began almost immediately – would the inevitable sequel be able to keep up, or would it disappoint?  As it turns out, the sequel didn’t just match the first one; it surpassed it.  It had all the right elements in it, some great acting in key scenes, and a very satisfying ending.  In fact, until The Avengers was released in 2012 I considered Spider-Man 2 to be the best superhero movie that had been made.

Note: this review will contain spoilers for Spider-Man (2002).


This sequel returns everyone from the first film, even including cameos from both Cliff Robertson and Willem Dafoe.  Tobey Maguire returns as Peter Parker, although not without some brinksmanship between him and the studio where there was talk of Jake Gyllenhaal taking over the role.  Kirsten Dunst is once again Mary Jane Watson, who with Peter’s encouragement is trying to become a stage actress.  James Franco is Harry Osborn, who after the events of the first film believes Spider-Man murdered his father.  Rosemary Harris is Aunt May who does her usual worrying/pampering routine with Peter.  And J.K. Simmons is the perfect embodiment of J. Jonah Jameson.

Added to this cast is Alfred Molina as Dr. Otto Octavius, a scientist experimenting with controlled fusion processes.  He is also a mentor for Peter since not much is going well in Peter’s life.  His responsibilities as Spider-Man have cost him his job delivering pizzas, have put a strain on his friendship/relationship with Mary Jane since he can’t ever seem to make any of her performances, and his best friend Harry Osborn is still obsessing over the death of his father.  Maintaining his dual life and secret identity, especially with those closest to him, is weighing heavily on Peter.  Even Dr. Octavius has some bad news for Peter: he feels that his prize student isn’t devoting enough time to his studies and that if he would he could truly be something special.

Things are about to get a lot worse.  During an experiment in which Dr. Octavius is using some robotic arms controlled by an artificial intelligence, the buffer chip that prevented the A.I. from connecting to Dr. Octavius’ brain is damaged.  To make matters worse, the accident has fused the arms to his body.  When he wakes up he starts having thoughts that are not his own; the emotionless A.I. is trying to take control of him.  Combine this with the fact that his wife was also killed in the accident and he goes mad.

By the way, if it’s one thing that Stan Lee (co-creator of Spider-Man, among many other Marvel characters) loves is alliteration, to the point where it strains the bounds of credulity: Peter Parker, J. Jonah Jameson, Fantastic Four, etc.  My favorite line in the entire movie is delivered by Jameson after the accident when he says, “A man named Otto Octavius ends up with eight limbs.  What are the odds?”

Now being partially controlled by the A.I., the newly dubbed Dr. Octopus, or “Doc Ock” for short, escapes from the hospital and determines he will resume his fusion experiment.  He must succeed with it.  He needs certain materials, though, and the rarest is tritium.  After cutting a swath of terror through the city he goes to see Harry Osborn, whose company was originally financing him.  Osborn agrees to get Doc Ock the tritium he needs if Doc Ock will in return give Harry Spider-Man.  Harry tells him that Peter Parker is the best person to be able to connect with Spider-Man.  Peter doesn’t know it, but he’s got a whole lot bigger problem now headed his way.

I do have a couple of small criticisms with the film (i.e. the “science”, especially at the end, is completely ridiculous), but by far the biggest complaint I heard was one that just amused me to no end.  It was that when Doc Ock grabs Mary Jane to lure out Spider-Man she is screaming her head off.  Some people wanted her to be a better example for women: be strong; confident; independent; not need someone else to save her.  Let’s stop to think about this for a minute.

Say you’re a woman (or hell, even a big, burly man).  You’re sitting in a deli minding your own business when a freaking car comes crashing through the window by your table.  Somehow you miraculously survive only to be grabbed by an insane monster with metal arms who starts to climb a building, holding you hundreds of feet in the air, threatening to kill you.  Would your thought process go something like, “Okay, think.  You’re a strong, confident person.  You can come up with a solution.  Maybe I can trick this brilliant, insane scientist by talking reasonably to him.  Maybe I can reach into my pocket for my keys and cut my way through this metal arm.  Just stay calm.”  Or would your own reaction be something along the lines of “What the f*ck is going on?  Where did that car come from?  Where am I?  Oh shit, I’m hundreds of feet in the air!  What are you?  Don’t kill me!  Don’t kill me!  AAAAAAAAGGGGGGHHHHHH!!!!!!!!!”  I’m thinking the second reaction is far more likely, so criticizing the character of Mary Jane as not setting a strong example for women is just ridiculous.

There are a number of small references in the film for comic book fans.  The scene where Peter decides to stop being Spider-Man in order to try to get control of his life is exactly from the classic “Spider-Man No More” issue, right down to the way the suit appears in the trash can.  There is a short appearance by Dr. Curt Connors (Dylan Baker), who people are now probably more familiar with if they were unfortunate enough to see the 2012 Spider-Man reboot.  At one point there were a whole lot more comic book characters.  Early scripts called for appearances of the Black Cat, the Lizard, and the new Green Goblin, in addition to Doc Ock.  Thankfully, smarter heads prevailed and they decided to concentrate on one main villain.  Unfortunately, director Sam Raimi couldn’t resist throwing everything but the kitchen sink into the third film and it was a lesser result for it.

If you watch closely you will also see a number of Raimi touches like cameos by Bruce Campbell, brother Ted Raimi, and the 1973 Oldsmobile Delta 88.  Fans of the TV show Bones should watch for a brief appearance by Emily Deschanel early in her career as a receptionist.  And even though she had started to become better known Elizabeth Banks reprised her small role from the first film as Betty Brant. And of course, Stan Lee cameos, this time as a man saving someone from falling debris.

There is much more going on in this film, but I will not spoil it.  Other than the final shot of Mary Jane’s worried face wondering if she’d made a horrible mistake, I loved the ending of this film.  It was a great one.  If I gave half star ratings this would be a 4.5 star film.  It’s got a great follow-up story from the first movie, it’s got great acting in key scenes, and it’s very satisfying.  Unless you hate superhero films on principle I highly recommend you see this film.