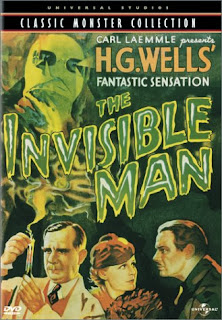 
The film opens with a mysterious stranger named (Rains) arriving at an in a small English village in the wintertime.  He is swaddled all in bandages and wears dark glasses.  He rents a room and demands to be left alone.  After some time has passed he has not paid his rent and has done damage to the room with the chemicals he is experimenting with in there.  The innkeeper’s wife (Una O’Connor), a classic screen harridan if there ever was one, has her husband go into his room and demand the stranger pay what he owes and then leave.  throws the innkeeper down the stairs.  When the police are called he removes his bandages to reveal…nothing!  There is no head where one should be.  This frightens the innkeeper’s wife half to death.  He then removes the rest of his clothes to avoid the mob, steals a bicycle (watch for a younger Walter Brennan as the bike’s owner), and makes his escape.

Dr. Griffin is a scientist who worked for Dr. Cranley (Henry Travers) and who was courting his daughter Flora (Gloria Stuart, who more than six decades later would play the elder Rose in 1997’s Titanic).  Flora is worried about the fact that has disappeared.  Dr. Kemp (William Harrigan), another assistant of Dr. Cranley’s, tries to search ’s lab, but all that is found is a list of chemicals.  One of them is quite dangerous, though, and is capable of driving someone insane.

Griffin shows up at Kemp’s house, tells him how he discovered how to make himself invisible, but has not yet found a way to reverse it, then forces Kemp to be his accomplice.  plans to revenge himself on anyone he feels has done him wrong –starting with the innkeepers.  returns there and finds police have arrived, but that they do not believe the story.  kills the policeman.

Meanwhile, Kemp is trying to get Dr. Cranley and the police involved.  When returns and sees Flora he becomes less angry, but once he finds out Kemp has contacted the police he loses it.  He vows to kill Kemp and even names a specific time.  The police now believe the story, but how do you catch an invisible man?

Claude Rains was chosen for the title role because of his voice.  The filmmakers wanted someone who sounded intelligent and who spoke clearly.  And there are stories that Boris Karloff was originally approached for the role, but that he either turned it down because he would not appear onscreen, or because they would not pay him what he was owed.  In either case, Karloff’s refusal was Rains’ opportunity of a lifetime.  He would go on to many classic roles including Mr. Smith Goes to (1939) and (1942), and earn four Oscar nominations.

The invisibility effects were a combination of props on wires (the image of a burning cigarette floating in the air is iconic) and a process they pioneered for removing parts of images from the final film.  Now remember, this was several decades before the use of computers to erase objects on screens.  The filmmakers dressed Rains in a black suit that covered his entire body, and then filmed him against a black background.  They then shot another set of film without Rains there at all.  When he removed his bandages revealing the black head covering against the black background, it was if his head was not there.  They then matted this against the other film without Rains and voila – a man with no visible head, yet still interacting with the objects in the room.

I don’t know how they shot a scene where footprints just appear in the snow as walks through it.  I do know that they are a goof, though, because they appear to be getting made by a shoe, yet has to be naked to be completely invisible.  I wonder if this film would have passed the Production Code if it had been made just a year or two later when it was being enforced.  The concept that there’s a naked man onscreen, even if you can’t see him, probably would have bothered someone in the censor’s office.

Think that’s farfetched?  In 1986 Ronald Reagan signed a bill into law banning Braille editions of Playboy from being in the ’ Library of Congress.  In case you’re wondering, they contain only the articles that appear in each monthly issue.  Playboy has been producing Braille editions since 1970.

The Invisible Man is one of the classic “monster” movies that you should see.  Even if you don’t think it’s up your alley, the impact it’s had on popular culture has been huge.  I recommend you give it a try.