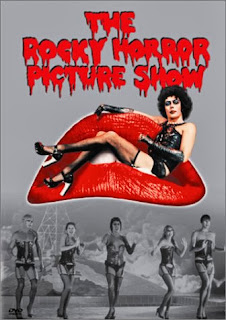 My first experience with The Rocky Horror Picture Show was not a positive one.  When I was in college VHS tapes of movies were exploding in popularity, but the people who owned the rights to this film refused to release it in order to keep people going to the theaters that were showing the midnight movies.  Somehow my college got the film and showed it on campus one evening.  I went in knowing NOTHING about either the film or the audience participation.  When it started and people were yelling “lips!” I thought it was a little funny.  I soon caught on that the people who did know the movie had all these rituals.  Unfortunately, I knew none of them in order to play along, so I just sat there kind of irritated because I couldn’t hear any of the dialogue or the songs.

To make matters worse, some guys had squirt guns for the rain scene, but they decided that it would be fun to continue squirting people long after the scene had ended.  One of them specifically targeted me.  When I made a move towards him he ran off, giggling, but he was soon back and spraying me again.  So I sat there and thought about it.  If I walked out, I didn’t get to see the movie.  If I chased the guy down I didn’t get to see the movie and he might get in a good shot on me when I had him cornered.  And if I stayed I wouldn’t be able to watch the movie because of all the noise and I would get soaked.  It was an easy decision: I walked out.  It was not until several years later when they finally released the film on VHS that I was able to rent it and see it.  I liked some of the songs quite a bit, and I was amused by some of the story.  When it came to DVD I saw it again and picked up on a lot of movie references that I had not gotten before.  Overall, I like the film, but don’t think it’s a big enough deal to have generated all the pop culture fandom that it has.

A quick intro for those who, like me many years ago, know nothing about this film.  It is a spoof of the old monster movies that writer Richard O’Brien loved as a kid.  It specifically uses the Frankenstein story as its base, but there are many, many more references in the film.  It has a number of people in it that went on to greater fame.

Newlyweds Brad (Barry Bostwick) and Janet (Susan Sarandon) get caught in a rainstorm and make their way to an old castle.  Inside it they find Dr. Frank-N-Furter (Tim Curry), his handyman Riff Raff (writer Richard O’Brien), his maid Magenta (Patricia Quinn), and a groupie named (Little Nell).  Curry, O’Brien, Quinn, and Nell all reprised their roles from the stage show.

Dr. Frank-N-Furter is a “sweet transvestite from transsexual ” who creates his own artificial man named Rocky (Peter Hinwood).  Meatloaf appears as a biker named Eddie and the whole thing is narrated by a criminologist (Charles Gray).  Jonathan Adams also appears as a rival scientist.

This film is a musical, with a number of songs that have become popular.  They include the opening Science Fiction Double Feature which is sung by a disembodied set of lips as the film's credits appear.  The Time Warp is probably the most popular song from the movie.  The songs continue to be interesting for about two thirds of the film, but I felt the last few were not up to par with the others and it leant a feeling of the film petering out (no pun intended) towards the end.

I mentioned references to other films.  The opening song just has a ton of lyrics specific to all the old monster and science fiction films.  I even used a couple lines as my quote for my Before Star Wars category of older, classic science fiction films.  Other references in The Rocky Horror Picture show include the old studio logos, especially the RKO tower that Rocky climbs.  There is a Bride of Frankenstein hairdo.  There’s eating off a table with a dead body under it like in Hitchcock’s film Rope (1948).  Eddie the biker has “Love” and “Hate” on his knuckles like in The Night of the Hunter (1955).  When Dr. Frank-N-Furter has created Rocky – an Aryan looking man – another character notes that it is a “triumph of will”.  They even re-create the classic American Gothic painting in the film’s opening scene.  And this itself is a reference to The Wizard of Oz because they have several of the film’s actors play second roles in this scene, just as they do in the Judy Garland film.  The list goes on and on.  I didn’t get some of those the first time I saw it, but I did the second time because I had now seen a lot more of the older films.

In fact, it is those tributes to the older films, along with several songs, that makes me like this movie.  The plot itself is silly, and the acting is intentionally over the top.  The latter might be another homage to early monster movies, or just a style that they chose to go with.

Here is the opening credits scene with the song Science Fiction Double Feature.  I count references to eleven different films in it.  How many can you name?

In case you are wondering, the subject matter in the film, with crossdressing, both gay and straight sex, and aliens coming to Earth to party have never bothered me.  It was all done in a campy style that was impossible to be offended by.  Not that this has kept various people and organizations from trying to ban the film.  As it inevitably does when you try to tell people they shouldn’t be allowed to see something, this just increased the movie’s popularity.

So, if you want to do the Time Warp and revisit a loving spoof of old monster movies then I recommend you give The Rocky Horror Picture Show a try.  At the very least you will be seeing for yourself what all the fuss is about.