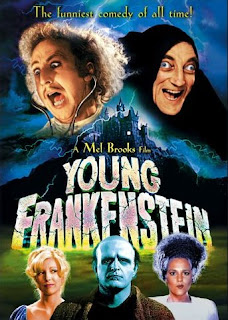 How about the year Mel Brooks had in 1974?  He directed what are now known as two genre spoof comedy classics – Blazing Saddles and Young Frankenstein.  While the sendups of western clichés and the “meta-ness” of Blazing Saddles are fun, I prefer Young Frankenstein’s take on the monster movie genre in general and the Frankenstein’s monster movies in particular.  Brooks and the film’s star, Gene Wilder, co-wrote the film and you could tell they had a blast making it.  They received an Oscar nomination for Best Adapted Screenplay, but lost to The Godfather Part II.  “Adapted” is a bit of a reach.  There’s not a lot of connection between this film and Mary Shelley’s 1818 novel, other than the concepts.  Young Frankenstein actually is closer to the Frankenstein movies that it is making fun of.  Regardless of what it is based on, it is a very funny movie.

Respected doctor Frederick Frankenstein (Wilder) gets annoyed whenever anyone connects him to his grandfather, the mad scientist who thought he could re-animate the dead.  He has even gone to the point of changing the pronunciation of his name – “It’s Fronk-en-steen.”  As luck would have it, he inherits his family’s estate, and leaving behind his fiancée Elizabeth (Madeline Kahn), he is soon off to Transylvania to check it out (“Pardon me boy, is that the choo choo?”)

When he gets there he discovers housekeeper Frau Blucher (Cloris Leachman), sexy lab assistant Inga (Teri Garr), and the hunchback Igor (Marty Feldman), who when hearing Frankenstein pronounce his name corrects him with “It’s eye-gore”.  It doesn’t take Frankenstein long to discover his grandfather’s lab and notes.  Soon he, too, is obsessed with animating the dead.  He sends Igor out to retrieve the brain of a noted scientist from a lab, but when that is destroyed Igor just grabs the nearest one, despite the fact that it has a sign under it saying it is an abnormal brain that should not be used.  When the monster acts erratic this leads to the following exchange:  F-“What was the name of the person whose brain I used?” I-“Abbie something.”  F-“Abbie what?”  I-“Abbie Normal.”  F-“Are you saying I put an abnormal brain into a seven and a half foot tall monster?!”

Yes, the monster (Peter Boyle) is animalistic and scared of fire, but luckily music sooths him.  Eventually he escapes from the lab and roams about the countryside.  In two great parodies of scenes from the 1930s Frankenstein films he encounters a little girl and a blind hermit.  The latter features a cameo from Gene Hackman.

Frankenstein manages to recapture the monster, but not without alarming the townspeople, whose Inspector (Brooks’ regular Kenneth Mars) warns Frankenstein to not carry out his grandfather’s experiments.  To try to show that the monster is trainable Frankenstein puts on a song and dance performance.  You will never see “Puttin’ on the Ritz” the same way ever again.  This fails and everyone is up in arms.  Can Frankenstein save himself and his creation?

Young Frankenstein is filled with references and homages to the classic 1930s films, not the least of which is that it is shot in black and white.  The best homage is the equipment in the lab.  It’s the same machines and props as those used in the 1931 film.  The person who designed them saved them in his garage for decades.  When Brooks found this out he got permission to use them again in this film. 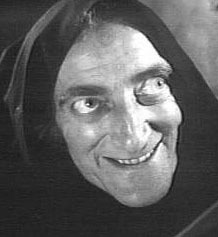 This movie is just filled with funny lines and sight gags, from a horse whinnying every time Frau Blucher’s name is spoken to Igor’s moving hump and his “walk this way” bit.  There’s an urban legend that Aerosmith wrote their song Walk This Way after seeing this film, but it sounds a little too good to be true to me.  Marty Feldman as Igor was quite memorable, though, and that was because of his eyes.  All he had to do was stare without blinking and it was creepy, but he could subtly change his facial expression and they became funny enough to make you laugh.  And when he bugged them out, they really, well, stood out.  (Sorry, couldn’t resist.)

Both Leachman and Kahn received Golden Globe nominations for their performances.  Kahn had originally started out in the role of the sexy lab assistant Inga, but later decided she preferred playing the uptight fiancée.  That left Teri Garr, who had been cast as the fiancée, out in the cold until Mel Brooks asked her if she could do a German accent.  She could, so Kahn and Garr ended up swapping roles. 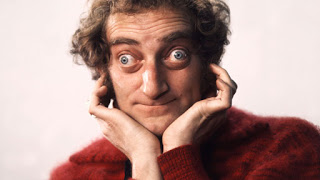 While Young Frankenstein is funnier if you’ve seen the 1931 Frankenstein and 1935 Bride of Frankenstein movies, you do not have to watch them first.  I saw it before viewing those other two and I still laughed quite a bit.  It was only after seeing those, and then watching Young Frankenstein again, that I realized how many little jokes I had missed the first time.  Unless you just don’t like watching anything except serious movies, I highly recommend this film.