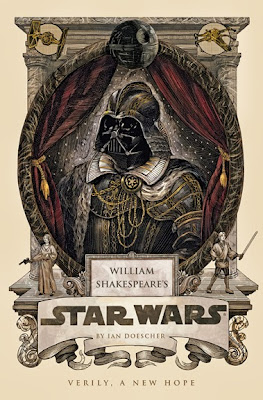 In Star Trek VI: The Undiscovered Country (1991) a Klingon Chancellor said, “You have not experienced Shakespeare until you have read him in the original Klingon.”  I’m going to paraphrase/parallel that and say that you have not experienced Star Wars until you have read the original Shakespearean version.  What’s that?  You didn’t realize Star Wars was originally written by Shakespeare?  Well, neither did I until I recently picked up this book – thoughtfully presented by Ian Doescher.  It has everything you would expect from Shakespeare and even some things, like Banthas and Jawas, that you might not.

Before I go any further I should warn you that this post contains spoilers for the 1977 film Star Wars (aka Star Wars Episode IV: A New Hope), in case you have not seen it.  By the way, this book has “Verily, A New Hope” on the cover, so even that part of the title is apparently original.

You may be wondering if this is a joke or quick knockoff.  The answer is “no” to both.  While there is certainly a lot of humor in seeing the dialogue and action from the film presented as if written by Shakespeare himself, author Ian Doescher did one hell of a serious job adapting it.  This isn’t someone just tossing out some “thee”s and “thou”s; this is a person who knows his Shakespeare, and his Star Wars, too.  While the book will be best appreciated by people who are fans of both, it will still be entertaining for those who only know one or the other. 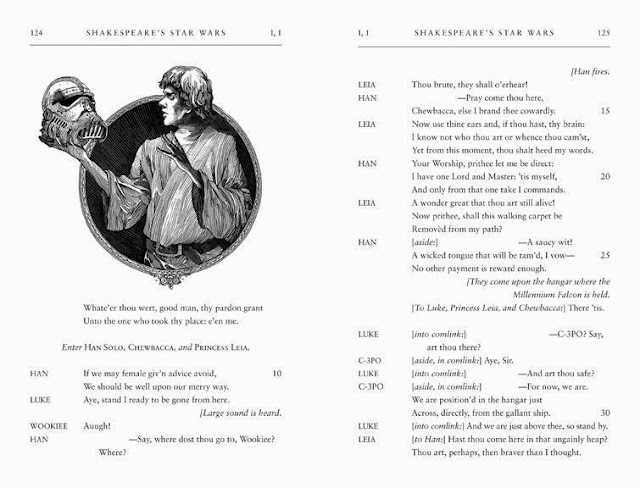 As Doescher writes in his Afterword, he had just watched the original trilogy for the umpteenth time and he then went to a play where Shakespeare’s The Merry Wives of Windsor was transplanted to a modern setting.  A light bulb went on over his head and he started wondering what it would be like to present Star Wars as if written by Shakespeare.  Where he knew every line of the film by heart, and where he had been a fan of Shakespeare since the 8th grade, he was supremely qualified to bring this to life. 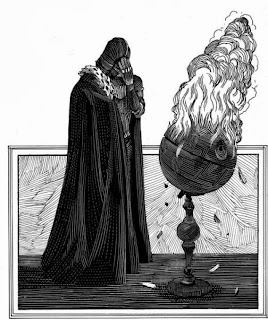 He also points out that while the two may not appear to have much in common at first, they actually do.  Both explore the idea of what makes a hero.  Joseph Campbell wrote a book titled The Hero with a Thousand Faces.  In it he referenced Shakespeare’s works for examples of heroes.  When George Lucas was developing Star Wars he often referenced ’s book for archetypes and motifs of the classic heroes.

William Shakespeare’s Star Wars is presented exactly like the Shakespeare books you may remember from high school or college.  It has five acts, and multiple scenes within them.  It is written in blank verse (unrhymed iambic pentameter) just like Shakespeare did.  Acts end with rhyming couplets.  There are illustrations by Nicolas Delort, adjusted to be period correct, as if this was being presented on a 16th century stage.  The entire play even opens, very fittingly, with a sonnet: 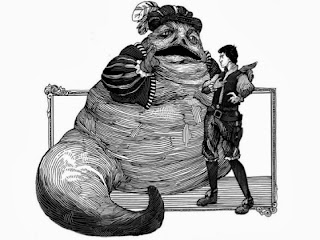 There are several places where Shakespeare fans will recognize familiar lines changed just a little to fit the situation – “Once more into the trench dear friends!” – and there are also in jokes for the Star Wars fans.  After Han has killed Greedo he says, “[To innkeeper:] Pray, goodly sir, forgive me for the mess.  [Aside:] And whether I shot first, I’ll ne’er confess!”  A little later when Han meets Jabba the Hut he says in an aside, “Now, marry, ‘tis an unexpected scene.”

This book had the full support of George Lucas and the people who own the properties.  They greatly enjoyed it when they read it.  I would be very surprised if Doescher is not already working on Shakespearean versions of The Empire Strikes Back and The Return of the Jedi.  I look forward to them.  I would also expect someone to be presenting this on stage in the near future.