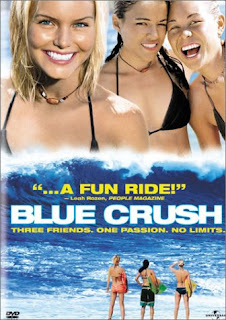 Why might you want to watch Blue Crush?  Well, it’s not for the freshness of the story, which has been done many times.  But how many movies can honestly claim they have original plots in them anyway?  It’s not for the Academy Awards, because it received none.  This is more an Mtv Awards kind of movie.  So why bother with it?  Because it has stunning cinematography and sound for the ocean, wave, and surfing scenes, of which there are plenty.  When I used to demonstrate my widescreen TV and surround sound system to people in the early 2000s (neither was common yet) I used to play the lobby and rooftop scene from The Matrix (1999) and the surfing practice scene from the middle of Blue Crush.  Many people would exclaim over the way the ocean really stood out.  In addition, since this is a movie about surfing there are plenty of great looking women and men that often appear in swimwear.

The film has Kate Bosworth in her first starring role.  She plays Anne Marie Chadwick, a young woman supporting herself and her teenage sister Penny (Mika Boorem) by working as a maid at one of the luxury resorts in .  There’s tension between the two sisters as she tries to keep Penny out of trouble.  Anne Marie is friends with Eden (Michelle Rodriguez) and Lena ( in her film debut), both of whom are also maids at the same hotel.  Every morning the four go surfing for a while, then drop Penny off at high school while they go to work.  Anne Marie has dreams of one day turning professional.  She also wants people to take women’s surfing as seriously as it does the men’s side.  It’s a pretty macho sport.  As she asks at one point, why hasn’t a woman ever been on the cover of the premiere surfing magazine?

Being a maid is a lousy job and it’s made worse when football season is over and the professional players have come to for the Pro Bowl and vacation.  Anne Marie goes into one room and simply loses it.  It is a pig sty.  She picks a condom up off the floor (she’s got gloves on) and walks all the way out to the beach with it, yelling for whoever has that room number.  It turns out to be Leslie (Faizon Love), a huge lineman who is about a foot taller than her and literally three times her weight.  She calls him on the carpet, embarrasses him in front of everyone, and gets an apology.  She took a big risk of losing her job, but she got some respect from the football players, one of whom pursues her.

He is a quarterback and his name is Matthew (Matt Tolman getting to play a good guy after being the bad boyfriend in 2001’s Legally Blonde.)  Anne Marie wants nothing to do with a jock, least of all a football player, but he orders surfing lessons from her and she does need the money.  He turns out to be a pretty great guy; a lot better than her current boyfriend who thinks a girl surfing is silly.

There’s a big competition coming up and Anne Marie is training for it.  She took a bad fall earlier, hitting her head on an underwater rock, and is still gun shy because of it.  Will Anne Marie overcome this fear, win the competition, become a professional surfer, get on the cover of the big surfing magazine, and end up with a great boyfriend?  Actually, the answer to at least one of those is “no”.

Let’s get into the real reason to watch this movie – the scenery.  First of all, Kate Bosworth is beautiful.  She wasn’t the stick figure yet that she became in later years.  And she has really incredible eyes.  They are actually two different colors.  Her right eye is brown and her left eye is blue.  This is a feature known as heterochromia iridis.  Another well known actress with it is Mila Kunis, who has one brown eye and one green eye.  In Blue Crush they make sure to have an early scene where Kate is looking into a mirror so we can see her differently colored eyes. 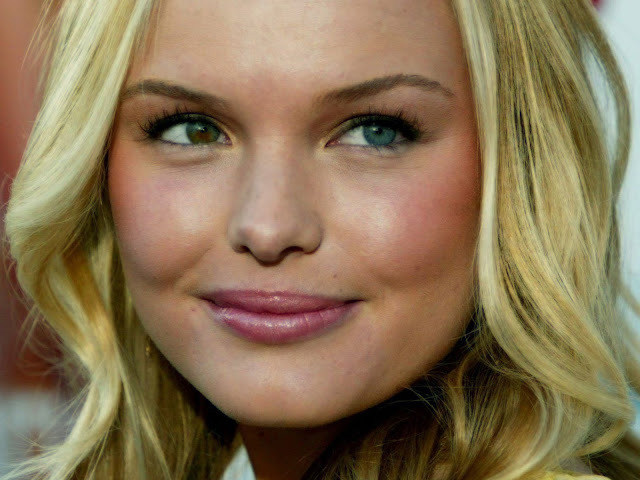 All three actresses did most of their own stunts in the film, including being out in the ocean.  The filmmakers had cameras everywhere and they captured some incredible shots, like what the back of a wave looks like underwater when it passes overhead.  (It’s like a horizontal tornado.  Watch for it near the end of the clip below.)  There are multiple shots of surfers in the pipes and they go right by just a couple of feet away.  You can see cameramen in the water in some of the wide shots, but it’s not distracting.  One hundred percent (100%) of the ocean, wave, and surfing scenes are real.  There is not one second of cgi to create any of the water effects.  In fact, the only cgi is some face replacement of Bosworth’s features over the surfing double’s for the close-ups of the most dangerous stunts.  It is noticeable, but they did the best they could with the technology they had back in 2002.

Michelle Rodriguez did all of the stunts where her character drives a personal watercraft through the swells and tows Anne Marie into the oncoming waves.  The stunt double, who was a professional surfer in her own right, said that Rodriguez towed her into the largest wave she has ever ridden.  It’s in the movie at the 1:00:20 mark.  And the third friend was played by , a woman who was a surfer in real life.  You can tell in her scenes by how much more comfortable she is on a board. 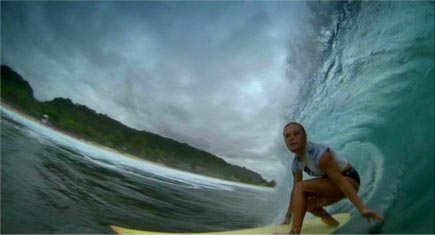 As the film shows, surfing is a dangerous sport.  In addition to being pounded by all the water trying to crush you to the bottom when you wipe out, the location they were at had a shallow reef that could seriously injure someone if they hit it.  Early in the film a man is shown coming out of the water with a bad cut.  He’s a professional surfer and the actresses were there to watch.  When they saw him and realized they were going to be out in the exact same waves in a couple of weeks it made them nervous.  In the commentary the filmmakers note a scene where Bosworth is paddling towards some waves and she looks back once.  They said that she was really looking back because she was expecting them to yell “Cut!” and stop the scene, but they wanted her to get closer to the waves.  During another scene in the film Bosworth literally got knocked unconscious when someone else’s surfboard hit her in the head.

I also mentioned the sound.  This is the perfect movie for a surround sound system.  Crank it up and hear the waves as they pass right over you.  Feel the vibration from the subwoofer when the sheer power of the water hits the unyielding land.  Listening to it just from the TV’s audio causes it to lose a lot of its impact.