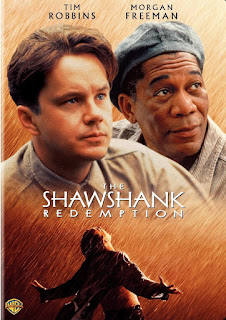 When I first discovered IMDB.com in April of 1997 I noticed it had a “Top 250” list and that the movie that was ranked number one was The Shawshank Redemption.  While I remembered that it was a prison film, I had not seen it and knew nothing else about it, this despite the fact that it received seven Oscar nominations, including one for Best Picture, just two years prior.  A movie about a man falsely imprisoned didn’t sound like something I would want to see, so I didn’t seek it out.  It wasn’t until several years later that I finally did see it and only then did I realize that I had misjudged it.  Yes, the basic plot about an innocent man being sent to prison is correct, but rather than being depressing, the film is ultimately an uplifting one about the power of the human spirit.

Unfortunately, by the time I saw the movie the ending had been spoiled for me by a professional critic who wrote for Entertainment Weekly.  She would routinely spoil movies, sometimes even the ones she was reviewing, and when people wrote in to complain she once responded with the printable equivalent of “tough shit.”  I eventually stopped reading that magazine because of her.

Anyway, this is the kind of film that might have earned a five star rating from me had I not known what was going to happen.  As it was, I did know and the film still managed to make a very good impression on me.

Andy Dufresne (Tim Robbins) is a respected banker in in the years following World War II.  He is then accused of killing his wife and her lover.  Even though he says he is innocent he is found guilty and sentenced to life in Shawshank Prison up the coast in (for those who know the area, it was a reference to Thomaston Prison.)  Even though he is the main character of the film, we do not see things from his point of view.  Rather, we hear everything from the perspective of Ellis “Red” (Morgan Freeman) – a man also serving a life sentence.

Red at first misjudges Andy, but soon strikes up a friendship with him.  When Andy finds out Red can get things for the other prisoners he asks for a rock hammer.  At first Red doesn’t want to because if anyone found out he had supplied another prisoner with a weapon he would be in serious trouble.  When he sees how delicate it is (it’s for knocking the dirt off rock samples), he laughs.  Andy wants to use it to collect samples in the prison yard.  It’s just the first example of how he doesn’t fit the profile of a man in prison for murder.

Andy’s skill at finances comes to the attention of the guards and eventually the warden.  Andy is “hired” by Warden Norton (Bob Gunton) to keep the books.  Soon, Andy is keeping two sets of books, one of them to cover the money the warden is embezzling from the state prison funds.  Andy’s position allows him some liberties other prisoners do not get.  All is not wonderful, though, because the Captain of the guards, Hadley (Clancy Brown), is a sadist and takes every opportunity to make life miserable for the prisoners.

One day a new prisoner is transferred to Shawshank.  His name is Tommy (Gil Bellows) and he meets Andy, Red, and Heywood (William Sadler).  (Another prisoner – Brooks, played by James Whitmore, had left the prison by this time.)  Tommy has an interesting story.  His old cellmate told him about killing a woman and her lover, and that the woman’s husband ended up taking the fall for it.  He’s talking about Andy.  If this story can get investigated Andy could win his freedom.  The warden gets wind of it, though, and takes steps to ensure that Andy stays right where he is cooking the books for him.

The final act of the film does take quite a turn.  I won’t describe it in order to avoid spoilers, but it is quite something.  I will say that I am glad for once that a studio overrode the director, though.  Frank Darabont wanted an ambiguous ending that didn’t resolve anything.  The studio insisted on the ending we do get in the film.

The Shawshank Redemption is based on a non-supernatural Stephen King short story.  Trivia: The story appeared in King's book Different Seasons.  Two other stories from that same book have also been made into movies - The Body (as Stand By Me) and Apt Pupil.  Frank Darabont adapted the Shawshank story and directed the film.  He wanted Tom Hanks for the lead role of Andy Dufresne, but Hanks was committed to Forrest Gump.  As it turns out, Darabont was able to work with Hanks in the next film he did, The Green Mile (1999), which is also a prison movie based on a short story by King.

I mentioned that The Shawshank Redemption received seven Oscar nominations.  It did not win any, losing to Forrest Gump in multiple categories.  Perhaps the most curious loss was to the film Legends of the Fall for Best Cinematography.  I guess Brad Pitt was just too pretty in it for his film’s cinematographer to lose.  It’s curious because it started a string of nine (and counting) Best Cinematography nominations for Roger Deakins without a single win.  This includes being nominated for two of his films – The Assassination of Jesse James by the Coward Robert Ford and Best Picture winner No Country for Old Men – in 2008 alone.

The reality is that The Shawshank Redemption, despite those Oscar nominations and the place it now holds, was not that well known at the time.  It barely made back its $25 million budget at the box office.  Its popularity started to grow as people discovered it on the rental market.  (The studio had flooded it with tons of copies of the film.)  Later, TNT acquired the rights to it for next to nothing and started showing it on heavy rotation.  That’s when it really took off.  It didn’t hurt that as IMDB started to grow in popularity that this film would often be mentioned as the one that movie lovers, as opposed to movie critics, had voted as the best movie of all time.

By the way, if you look at IMDB’s Top 250 list today you will still see The Shawshank Redemption at the top.  It hasn’t always been there, though.  For several years in the 2000s The Godfather took over the top spot.  After The Dark Knight came out a group of Nolan fanboys banded together to try to vote it to the top of IMDB’s list.  They did this by creating tons of fake accounts just to vote tens for The Dark Knight and ones for The Godfather.  Unfortunately (for them) they were not the sharpest tools in the shed and it didn’t occur to them to also vote ones for The Shawshank Redemption.  The result was that Godfather and Shawshank swapped positions, while Dark Knight ultimately failed to reach number one – settling in at the lower part of the Top 10.

If, like me, you have avoided watching The Shawshank Redemption because you think it will be dark and depressing, then please reconsider.  Once I saw it I was very glad I did.  Is it the best movie of all time?  No, not in my opinion, but it is still very good.  I highly recommend this film.