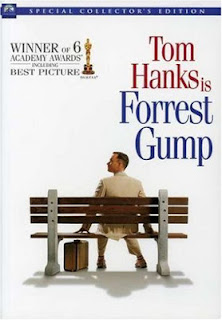 Every once and a while a movie that is very popular with audiences will also win the Best Picture Oscar.  This happened in 1994 with Forrest Gump.  In fact, the film received 13 Oscar nominations and won six, including four of the “big five” – Picture, Director, Actor, and Screenplay.  It only missed out for Best Actress (there was no nomination for the film in that category.)  It also provided Tom Hanks with his second consecutive Best Actor Oscar – something only Spencer Tracy had accomplished before him.  Forrest Gump is a bittersweet look at the extraordinary life of one man who touched many other lives around him.

For a while you couldn’t go very long without hearing someone say “life is like a box of chocolates” – which is actually a misquote.  Forrest’s mom says “Life’s a box of chocolates” and Forrest says, “Mama always said life was like a box of chocolates; you never know what you’re gonna get.”  In fact, this film was so prevalent that there was a backlash against it for a while.  Some people started saying that Pulp Fiction should have won the Oscar.  Others said Forrest Gump was just a soapbox for whatever political views they disagreed with.  Thankfully, most of that backlash has gone away and people can once again just enjoy the film.

Tom Hanks plays the title character.  Forrest is what would have been charitably termed at the time as “a little slow”.  Even though he’s not very smart, he’s got a good heart inside of him.  We meet him as an adult sitting on a bench waiting for a bus to arrive.  He strikes up conversations with various people who sit next to him and the movie flashes back to the events in his life that have led up to who he is today.

Through twists of fate Forrest ends up interacting with any number of famous people and famous events from the 1950s to the early 1980s.  This includes teaching Elvis how to dance, meeting three presidents, discovering the Watergate break in, starting the whole 1970’s jogging trend, and many other things.  Through the use of computers director Robert Zemeckis inserts Tom Hanks into actual footage of these events, and it is pretty seamless.  Accompanying the passage of time is a veritable greatest hits of the 1950s, 60s, and 70s.  The double CD soundtrack for this film became a best seller, too.

Sally Field plays Forrest’s mother and this was a little strange for people like me who had seen her 1988 movie Punchline where Hanks plays a love interest of hers.  (In case you are wondering, she is ten years older than him.)  Robin Wright plays Jenny, the proverbial “girl next door” that Forrest has a thing for the entire movie.  Two other major characters are Lt. Dan (Gary Sinise) and Bubba (Mykelti Williamson) both of whom Forrest serves with in .  Sinise received an Oscar nomination for Best Supporting Actor, but lost to Martin Landau for Ed Wood.

The movie was based on the Winston Groom novel of the same name.  After the success of this film Groom wrote a sequel titled Gump & Co. and had some fun by having this movie actually exist in Forrest’s reality.  At one point Tom Hanks is another of the famous people Forrest runs into.  In our world there has been talk of making a sequel, but after almost 20 years now it’s highly doubtful it will ever happen.

Reportedly, Tom Hanks had to be convinced by Zemeckis to make this film.  He finally agreed only if the historical events were portrayed accurately.  Even then he was doubtful about doing the Southern accent he uses in the film.  He finally ended up actually patterning Forrest’s voice after the young boy who played Forrest as a kid.

Keep an eye out at the end of the film for a young Haley Joel Osment (The Sixth Sense) making his movie debut – not as young Forrest, but as another character connected to Forrest (saying exactly who he plays would be a spoiler.)  It was local boy Michael Conner Humphreys who played Young Forrest.  He was a non-actor and this was his only role.  On the other hand, Hanna Hall, who played Young Jenny, has continued to act right up to the present.  Her most well known films since Forrest Gump have been The Virgin Suicides and the 2007 Halloween reboot.

If you’ve somehow never watched Forrest Gump, then you owe it to yourself to see what has become a part of pop culture history.  The movie itself has even been enshrined in the National Film Registry for “culturally significant” American films.  I highly recommend it.