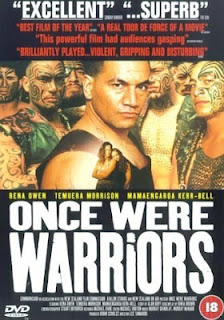 Once Were Warriors is a powerful drama from that takes a look at a Maori family living in .  If the 2002 film Whale Rider was the rural, hopeful look at the Maori culture, Once Were Warriors is the much grittier city cousin.  I can’t remember why I picked this tape off the rental shelf back in 1994 or 1995, but I am glad I did.  It disappeared not long after and it was impossible to find a copy for many years.  Almost ten years passed before it was finally released on DVD in the   I bought it and watched it again.  I was a little worried that my memories of this film had been built up over the years and that when I saw it again I would end up disappointed.  As it turns out, my fears were unfounded.  Not only did this film’s impact on me stand up to my memories, if anything it grew in stature.  As great a year as 1994 was for movies I consider this film to be the best of the best.

The film opens with a beautiful shot of the pastoral countryside.  As the camera moves we jarringly find out that this is simply a billboard amidst the rundown ugliness that is the poorer section of .  The billboard almost becomes a mocking reminder to the people who live there of what they do not have.  This opening shot also lets us know that we are not going to be seeing things through rose colored glasses.

Beth (Rena Owen) ran away and married Jake (Temuera Morrison) when they were teenagers.  She was from the Maori leadership family, while Jake’s ancestors had been among the slaves that had been captured during inter-tribal wars.  Beth’s family did not approve of her relationship with Jake so she left her family and heritage behind and moved to the city with Jake.  When the film opens they are in their thirties with five children ranging in age from late teens to about eight.

The oldest, Nig (Julian Arahanga), dislikes his father and soon ends up leaving home.  He joins a gang that likes to pretend they are like the Maori warriors of old, but in reality they know nothing of their own culture and the honor their ancestors carried.  The next oldest boy, Boogie (Taungaroa Emile) is in trouble with the law for petty crimes.  The oldest daughter, Grace (Mamaengaroa Kerr-Bell) is a thirteen year old who acts as a surrogate mother for the other children.  She tells them stories she has written in her journal to keep them distracted from her parents and their friends.

Why does she need to do this?  And why did Nig have a problem with his father, and Boogie have a problem with discipline?  Well, life hasn’t been kind to Beth and Jake.  At the start of the film Jake comes home and we see that the romance between the two of them is still there.  He confesses he has lost his job.  We feel a little sympathy for Jake.  He doesn’t seem to be in much of a hurry to find another job, though.  He’d rather hang out in a bar and drink with his friends.  When the bar closes he brings the party home with him.  Far from being pissed off at him, Beth joins the fun and she drinks right along with him.  This party reveals a darker side to Jake and Beth’s marriage.

Earlier at the bar we see Jake simply demolish a tough guy who was a jerk to the female singer there.  It’s a bit of a “yeah!” moment for the guy that we still feel a little positive towards.  During the party at home, though, we see that Jake is a vicious, violent man when he drinks.  Beth says something innocuous and with a suddenness that is both scary and startling, Jake hits Beth.  And he hits her hard, too.  Memories of what a couple punches from him did to the tough guy in the bar still reverberate in your mind as you realize what just one punch from him must have done to Beth.

To make matters worse, we see the next morning that these parties and the aftermath are apparently a regular occurrence.  Grace leads the other children downstairs and starts them cleaning up the bottles and washing away the stains.  Their manner lets us know it is a routine for them.

It would be easy to hate Jake now, and I did some, but the movie actually gives us another character to hate even more than him.  It put Jake’s actions into perspective and raised some difficult moral questions for me.  Jake’s violence makes him look almost not a man, but a force of nature.  When it was first aimed at the jerk in the bar my reaction was a little bit of a smirk as the other guy “got what he deserved.”  When the violence was directed towards Beth, though, it brought into clarity just how bad that violence truly was.  What, then, was I supposed to feel when I saw the actions of this other character and I knew that if Jake ever found out about them that he would turn his violence on this person?  I was put in the tough position of wanting to see Jake beat the ever-loving crap out of this character for what was going on, but realizing that I still abhorred the violence he was inflicting on his wife.  With Jake I would have to take the bad with the good.  He was not a weapon to be skillfully targeted, but one to be unleashed.

I have deliberately not described those actions, or even who the other character is, because those would be spoilers.  I will say that those actions lead to a tragedy for the family that may finally bring some clarity to Beth on what giving up her heritage for a life with Jake has really meant.  The title of the film gets spoken by Beth during a monologue she has at the end of the film.  It is a powerful scene.

Rena Owen and Temuera Morrison dominate the movie.  Both give great performances and both have worked steadily since, although Morrison has had more success (i.e. Jango Fett in the Star Wars franchise, the doomed Abin Sur in Green Lantern, etc.)  Mamaengaroa Kerr-Bell did a fantastic job in her first acting role as their daughter Grace, who is in some ways the heart of the movie.

The person in the cast who has had the best career since this film is someone I have not even mentioned yet.  That is Cliff Curtis.  You may not recognize the name, but you will probably recognize the face.  In an early-in-his-career screen appearance he plays “Uncle Bully” in Once Were Warriors.  After this he seemed to have had the right look for Hollywood to play the generic “vaguely ethnic” character in any number of films, but he eventually moved beyond that and has played a number of roles that have nothing to do with ethnicity, whether it was a crewman in Sunshine or the FBI field leader in Live Free or Die Hard.  He is also a connecting link with Whale Rider, which I mentioned at the top as the other great film about the Maori culture.   Curtis plays the father of the main character of Paikea and has a couple of wonderful scenes with her. (You can read my review of this five star movie here.)

Once Were Warriors is not an easy film to watch in some of its scenes, but it is ultimately a rewarding film to watch.  You may not tend to like heavy dramas, and I can certainly understand that.  All I will say is that this movie had a powerful effect on me and I give it my highest recommendation.