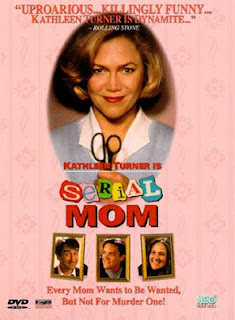 Serial Mom might be the first John Waters film I ever saw.  If you’ve never seen any movies from him let’s just say that they are out of the ordinary.  This film, for instance, is a dark comedy about a seemingly perfect mom that is a serial killer of people who do not observe all the standards of a polite society.  And this may be the most mainstream of the John Waters’ films that I have seen.  Reactions to this film vary widely, as they do with most of his movies.  Some people think this film is an outrage; I thought it was funny as hell.

Like Fargo, The Guns of Navarone, and a handful of other films, Serial Mom opens with a statement that this movie is based on true events, even though it is a complete work of fiction.  There is no reason for this opening statement, other than it probably amused Waters to put it there.  Someday I will do a category for these kinds of films.

Kathleen Turner chews the scenery as Beverly Sutphin, a seemingly perfect mother right out of the 1950s.  She’s always perfectly dressed, perfectly coiffed, and tries to maintain all the niceties of a polite society.  In secret, though, she has been making harassing phone calls to a neighbor (Waters’ regular Mink Stole) that pissed her off.  Her husband Eugene (Sam Waterston), daughter Misty (a pre-talk show ), and son Chip (a pre-Scream Matthew Lillard) have no idea this is going on.  The neighbor suspects her, but can’t prove anything.

For it’s a logical next step to take to kill the people who earn her scorn.  The first is her son’s teacher, who criticizes her son for his obsession with horror films.  The next is a boy who stands her daughter up and goes out with a trashy girl instead.  (’s nothing if not protective of her children.)  She’s not the best at hiding her activities, though.  Witnesses come forward, and they also end up on ’s “to kill” list.

Eventually the police start closing in, and her family starts wondering if the rumors about her are true.  is determined to get her day in court and she has complete confidence that she will be exonerated because she is such a good keeper of public morals (except for the whole killing thing, of course.)

This movie is a dark satire of those upright, moral people who feel that as long as they choose to do something then it must be the right thing to do.  Turner looked like she was having a ball playing this character.  The film also spoofs the whole culture of being famous for being famous – long before it ever became prevalent.  For instance, in the movie Misty sells T-Shirts of her mother during her mother’s trial.  And this film pre-dated the O.J. Simpson murder trial, yet there are several parallels with it.

If you’re the kind of person who reads the credits (I am), there is a small joke in there.  Instead of the usual disclaimer about no animals being hurt there is one about no houseflies being hurt.  Waters had a scene where someone swats a fly and he was not allowed to do that because it would be cruelty to animals.  He actually had to have someone make a fake fly just for that scene.  It’s like something he would satirize in one of his own movies.

If you have heard about John Waters’ films and were perhaps a little too intimidated by their reputations to watch one, then Serial Mom may be a good one to start with.  It might be the most “normal” of his movies.  Those people who see too much of themselves in the character might be insulted, but for everyone else I highly recommend this film.