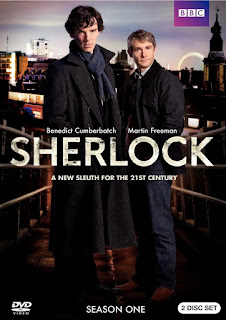 There have been many, many incarnations of Sherlock Holmes over the years.  Some of them have contributed permanent additions to the mythos surrounding the character – in some cases these are things that his creator – Sir Arthur Conan Doyle – never intended, or could have ever imagined.  I once read that Holmes was one of only five fictional characters that were known to every nation and every tribe on Earth.  (Superman was another; I can’t remember the rest.)  ‘Sherlock’ has chosen to show us a version of Holmes set in the present, with him being a very modern man.  It is a very well written show that appeals to both the Sherlock Holmes fan, and the casual viewer, alike.

‘Sherlock’ is considered a TV show in the , but to this American it seems strange to have an entire TV “season” consist of three movie-length episodes.  Consequently, I will be reviewing the individual episodes as movies, rather than reviewing all three episodes collectively as a TV season.  For this Misquoted Movies category I will be writing about the first movie: A Study in Pink.  I will write about the other “episodes” at a later date.

Holmes fans will recognize the title “A Study in Pink” to be a takeoff on the title of the first Conan Doyle novel A Study in Scarlet – the one that introduced the world to Sherlock Holmes.  One of the things the show’s creators have done that is quite brilliant is that they use some of the classic stories, but update them for today, and put a slightly different spin on them.  The result is that the people who know the stories well will recognize and appreciate how they have been modernized, but at the same time not be quite sure how things are going to play out.

Examples in A Study in Pink are the first meeting of Holmes and Watson; the modern day misinterpretations of why two single men might be sharing living quarters; how Mrs. Hudson has to keep reminding them that she’s their landlady (current day), not their housekeeper (classic stories); how Conan Doyle’s stories, being written as if by Dr. Watson, now become a blog that Watson has where he writes about their adventures; and many other little touches.  An example of something switched up is the “rache” clue left by the first victim.  It is first thought to be one thing, and then revealed to be the other, in both original story and this movie.  The difference is that the mistake and real meaning have been switched.

You don’t have to be familiar with the stories to follow what is going on, though.  Every character is introduced so that we understand who they are.  A Study in Pink opens with Dr. Watson having been wounded in .  He comes home with a limp.  In a great nod to the Conan Doyle stories, where Watson’s wound was mentioned as being either in his leg or his shoulder, this incarnation has Watson with a shoulder wound, but a psychosomatic limp.  And even the battle location carries over because Watson was injured in what is now Afghanistan in the original 1880s novel and 130 years later the British are still fighting in that region of the world.

Watson is a little at odds and not quite sure what to do with himself now that he is no longer a military doctor.  He runs into an old colleague (readers of the novel will recognize “Young Stamford”) who has another friend who is looking for someone to split expenses with on an in-London flat.  The other friend turns out to be Sherlock Holmes.  Things move rapidly, and Watson finds himself moving in with Holmes.

To his surprise Watson finds Detective Inspector Lestrade (another familiar name to the readers) calling Holmes in on a case.  Dr. Watson expresses surprise that the police would consult with an amateur.  What follows is a great scene.  You can watch it below.


There’s another great sequence where Watson is semi-abducted in order to meet with a mysterious man who seems to have a great interest in Sherlock Holmes.  The viewer isn’t sure for a while who he might be.  Here’s a hint: his name starts with “M”.  The actor – Mark Gatiss – is actually one of the creators of the show.  (And there is another great modernization of this character for the readers who are familiar with how the character appears in the Conan Doyle stories.)

Benedict Cumberbatch (Tinker Tailor Soldier Spy) plays the title character.  Martin Freeman (The Hobbit) plays Dr. Watson.  Both of them do great jobs in their roles, but the show just wouldn’t work if Cumberbatch didn’t completely embody what a modern day Sherlock Holmes would be like.  He is the heart and soul of the show.

I should mention the other two recent adaptations of this character because most people are probably familiar with at least one of them and are wondering how ‘Sherlock’ compares to them.  First are the two Robert Downey, Jr. theatrical movies.  If you have seen those, please try to block them from your mind.  Sherlock Holmes is not a slovenly, low class, Mixed Martial Arts master.  Other than the names of a few characters, those movies have no connection to Sherlock Holmes.

The other recent adaptation is the TV show Elementary, which has just debuted in the   It is a direct result of the success of the BBC series.  It, too, has a modern day Sherlock Holmes; in this case he is in .  The jury is still out on it, but so far ‘Sherlock’ has been quite a bit better than Elementary.

The title of that show does lead me to the misquote.  In none of the four novels and fifty-six short stories that Sir Arthur Conan Doyle wrote did Holmes ever say “Elementary, my dear Watson”.  He did say “elementary” once, and he did use the phrase “my dear Watson”, but he never used them together.  The quote actually comes from one of the first sound movie adaptations.  It caught on and eventually entered the public consciousness.

Holmes aficionados usually list the Basil Rathbone and Jeremy Brett interpretations of Sherlock Holmes as the gold standards.  I think we can safely add Benedict Cumberbatch’s Holmes to those.  I highly recommend you watch A Study in Pink.