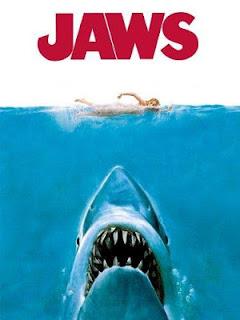 As I mentioned in my recent review, sometimes movies are not the result of careful pre-planning, but rather a series of serendipitous occurrences.  Jaws is one such movie.  Filming went so far over schedule, and there were so many problems with the mechanical shark built for the film, that director Steven Spielberg had to change many of the shots he had planned.  In addition, some of the most famous lines from the film were not in the original screenplay, but were adlibbed or written by the actors.  Not bad for a film, that when it finally came out, scared the crap out of moviegoers and that is now widely credited with single-handedly inventing the summer blockbuster.

Jaws was based on the best selling Peter Benchley novel of the same name.  There were quite a few changes from the book, which Benchley was not happy about, especially the climax of the movie.  Benchley was on location, and even had a cameo as a reporter, but I’ve heard that Spielberg finally threw Benchley off the set.  That might just be a movie-making legend, though.

The premise of Jaws is that a small town on is terrorized by a great white shark.  At the time, these kinds of sharks rarely came that far north because the water temperature was colder than they preferred.  That added an extra layer of fear to people who saw the movie because suddenly this exotic terror “from away” was being shown invading places it usually didn’t come to.  It added a layer of craziness and unpredictability to the shark’s actions, almost as if it were a thinking creature that had gone mad.  This made it even scarier.  Sadly, reality has started to mirror the movie.  Ocean temperatures have been rising since this film came out in the mid 1970s.  There were several great white sharks spotted off the coast of Massachusetts this last summer, hundreds of miles to the north of where the film took place.  They stayed around for weeks.  One person was badly injured by them.

In Jaws a woman is killed by a shark in the famous opening sequence.  (It was so famous that Spielberg had the same woman come back for the opening of his film 1941 to do a parody of it.)  The local Mayor (Murray Hamilton) doesn’t want anyone to panic because tourist season is coming and it is a huge source of income for the town.  He tries to get the woman’s death declared a boating accident.  Hooper (Richard Dreyfuss), an oceanographic scientist examines the body and declares “this was no boat accident.”  After a second person is killed this kicks off a frenzy in the town to find and kill the shark.  After this is supposedly successful, the real shark kills again.

Local Sheriff Brody (Roy Scheider) has been trying to keep things calm, but he is out of his depth.  Local shark fisherman Quint (Robert Shaw) finally declares that he will bring back the real shark, and he’ll only charge a somewhat enormous fee to do it.  Brody is basically forced to go along with Quint, even though he isn’t that fond of being on the water.  Hooper insists on going with them.  This sets up the final half of the film which is just these three men on their boat, against one badass shark.

I mentioned serendipity at the top.  The most famous example is that the mechanical shark built for the movie kept malfunctioning.  This forced Spielberg to shoot many scenes without it; instead just hinting at its presence.  He learned that this actually made the movie a lot scarier.  It’s a lesson most horror film directors have still not learned.  Spielberg instead shot some scenes as if we were seeing things from the shark’s perspective.  Combining these scenes with John William’s now-famous score (which Spielberg originally thought was a joke), and people were on the edge of their seats as the image got closer to a person and the music reached its crescendo.  Among the three Oscars that this film received was one for Best Score.

The famous line “You’re gonna need a bigger boat” (not “we’re gonna need a bigger boat as it is often misquoted) was adlibbed by Scheider.  Quint’s short poem shouted to Brody’s wife as the boat leaves with her husband was the result of Spielberg telling Shaw to “give the wife a hard time”.  Shaw just tossed out an old epitaph he knew.  And maybe the most riveting scene in the film – Quint’s story about having been on the U.S.S. Indianapolis when it sank (a real event) – was the result of Shaw not being happy with either his lines, or his performance.  He asked Spielberg for another chance with the scene.  He came back the next day sober (he was famous for his drinking), and having re-written large parts of it, and nailed the scene.  The result is one of the best character monologues in film history.

Another scene that competes with this as the best in the film in my opinion is the “three barrels” scene.  When both the scientist who’s studied sharks for years and the fisherman who has hunted them for decades are in disbelief at the shark’s strength, it lets the viewer know that these men are in serious trouble.  When it’s followed by Quint – a man who has been established as being as tough and badass as they come – just quietly saying that he’s going to turn the boat towards shore, that speaks volumes to the fact that this shark they are dealing with just might be too much for them.

You may never have seen Jaws because you are worried about potentially gory scenes.  While there are victims of the shark being shown, I wouldn’t consider the aftermaths to be any worse that what is seen nowadays on the average police procedural TV show when a dead body is shown.  (To me this is more an indication of how far TV has sunk, not how blasé people have become.)

Jaws is a great movie with a lot of tension and some good scares.  It features three top notch performances from Scheider, Shaw, and Dreyfuss, as well as direction from Spielberg before he started getting cutesy with his movies.  Unless you just don’t like scary movies at all, I highly recommend this film.