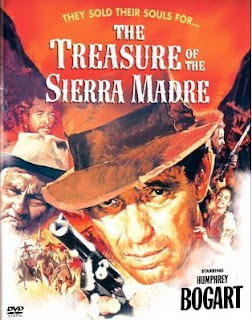 The Treasure of the Sierra Madre was a bit of a revelation for me.  I had seen Humphrey Bogart in several films, but he seemed to always play the confident, tough guy who was usually in control of a situation.  In this film he is grungy, unshaven, and paranoid to the point of insanity.  Despite Bogart’s Oscar win for The African Queen, and two other nominations for and The Caine Mutiny, I consider his performance in The Treasure of the Sierra Madre to be the best of his career.

I consider this to be the best film of director John Huston’s career, too.  Yes, the man who directed great films at both the beginning (1941’s The Maltese Falcon) and end (1985’s Prizzi’s Honor) of his almost fifty years behind the camera.

In the 1930s Huston read the B. Traven novel that the film is based on.  When The Maltese Falcon became a big hit he then tried to get this film made.  World War II interrupted, and it would not be until 1947 before he could start working on it.  By that time Bogart had become the biggest star at the studio and he was given the lead role of Fred C. Dobbs in the film.  Huston cast his own father, veteran actor Walter Huston in the role of Howard, an aging gold prospector.  Rounding out the main cast as Curtin was Tim Holt, a veteran of many a western.

Dobbs and Curtin are down-on-their-luck Americans stuck in a Mexican town after being swindled by a corrupt businessman who promised jobs.  They hear Howard talking about how he had found gold up in the mountains, but doesn’t have the resources to go get it.  Desperate for a break, and willing to take a chance, Dobbs and Curtin team up with Howard and head up into the mountains for gold.

Howard has been on many a prospecting trip, and even found gold before, so he has a ton of wisdom for the other two – which they mostly ignore, of course.  They also don’t ask why if Howard had found gold before then why is he in such dire straits now.

They reach the site and do find gold, but it’s not what they were expecting.  Howard explains to them that the gold here isn’t the big nuggets people talk about.  No, it’s almost fine grains of sand that they have to retrieve from the water.  They build a sluice and a method of lifting water to it and soon they do start to see some results.  At first everyone is happy and they keep finding more and more gold every day.

Howard has seen it all before, though.  He tells them that they first were going to be happy if they found a certain amount, but once they have that amount they are going to decide they need just a little more, and then just a little more than that.  They will all grow paranoid, hiding their shares from the others, constantly checking on them to make sure they are okay.  Distrust will grow among them, and thoughts of getting their share stolen, or stealing the other shares, will come to them.  Despite this experience, Howard is just as helpless as the others to the lure of gold.

Life gets complicated when a fourth man, Cody (Bruce Bennett), stumbles on their find.  He tells them he wants a share of it.  They resolve to murder him, but before they can, he is killed by bandits.

The leader of the bandits, Gold Hat (Alfonso Bedoya), first says they are Federales (the police) and that they have to confiscate their weapons.  Dobbs asks to see their badges to prove they are the authorities.  This leads to the famous response, which is often misquoted, “Badges? We ain’t got no badges.  We don’t need no badges.  I don’t have to show you any stinking badges!”  Dobbs fires a bullet through Gold Hat’s hat to get them to clear out.  He’s made a serious enemy, though.

The fact that they were willing to kill Cody in order to protect their share of gold shows that they are starting to lose their humanity.  Another time Curtin is trying to kill a lizard, which hides under a rock.  He goes to move the rock and Dobbs sees him.  This is where Dobbs has been hiding his share and his paranoia really comes to the surface when he thinks Curtin is trying to rob him.  After that none of the three sleeps very well, worried that one of the others will either try to rob or kill him.

When they do decide to sell some gold, they are presented with a major quandary.  None trusts the other two to head into town to sell the gold, but at the same time no one wants to go into town because he feels the others will spend the time he is gone to locate his unprotected stash.

They finally decide that all three will have to ride out together.  They are stopped by some villagers, though, who need medical help.  Howard is known to the locals for being a bit of a doctor, so they want him to come.  This would mean Howard would have to leave his gold with the other two.  Will he do this in order to help the sick?  If he does, what will Dobbs and Curtin do?  Will they steal Howard’s share together, or will they even turn on each other?  And what about Gold Hat, who didn’t just go away quietly?

As you can probably tell from the description, there is great, mounting tension in this film as it goes along.  Seeing all three starting to lose it as the trust issues mount is edge of your seat entertainment.

It’s no surprise that this film was nominated for Best Picture.  It lost to Hamlet (the Academy had to show they were refined), but it did win Best Director and Screenplay for John Huston, and Best Supporting Actor for Walter Huston.  This was the first ever father/son Oscar wins.  And thirty-seven years later Huston would direct his daughter Angelica Huston to her own Best Supporting Actress Oscar for Prizzi’s Honor.  They became the first, and I believe still only, three generation Oscar winners.

A couple fun pieces of trivia: Keep an eye out for a cameo by John Huston as the American Dobbs bums money off of at the beginning of the film.  Behind the camera, Huston tried to get reclusive author B. Traven, whose novel the film was based on, to come to the set, especially since he lived in .  Traven declined but sent his “good friend” Hal Croves to act as the technical advisor.  Some people on the crew became convinced that Croves actually was Traven, but he would always deny it.

The Treasure of the Sierra Madre is one of those classic movies that everyone should see.  It has universal themes of hope, greed, trust, and humanity/inhumanity.  It is a truly great film and I give it my highest recommendation.