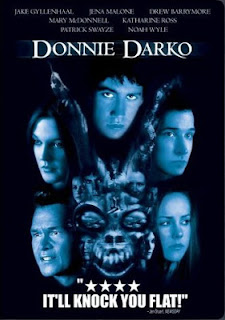 Much has been written about the “immediate impact” and “instant cult status” of the movie Donnie Darko.  The funny thing is, most of it is wrong.  The film, with its 4.5 million dollar budget, made only 500,000 dollars on its initial five months in theaters during the winter of 2001/2002.  A subsequent re-release in the summer of 2004, after its cult status had started to grow, still grossed only another 750,000 dollars.  It’s only after a decade of constant talk about it, a “director’s cut”, and the career growths of several of the young stars in it, that the film has truly achieved the impact that it has today.

I never heard of it when it was in the theaters.  The first time I ever did was driving in to work one morning in 2002 and the DJ was talking about this “weird movie” he had rented the night before.  He couldn’t explain it, but he really recommended people see it.  I made a mental note about it, but that was it.  I was using the year ending IMDB Top 250 lists for movie suggestions back then, and when Donnie Darko burst onto the list late in 2002 I put that together with the DJ’s recommendation and rented the movie.  I liked it quite a bit and recommended it to certain friends I knew could appreciate a different kind of movie.  In the years since then it’s been fun to watch the "cult of Darko" grow.

Without getting into details, since they would be spoilers, I will say that Donnie Darko is in the Time Travel on a Budget category because the film features a time loop as part of the plot.  Why that occurs and what its impacts are is a big part of the appeal of this movie.  I’m also not going to try to describe the plot in much detail because that would take far too much space.  Suffice it to say, there is a lot going on.

There is quite an eclectic cast in this film – a combination of young actors who would become more famous, older actors who had not worked much recently, and some familiar faces in different kinds of roles.  The teenage title character (Jake Gyllenhaal) lives with his parents (Holmes Osborne and Mary McDonnell), his older sister (played by Jake’s real life older sister Maggie Gyllenhaal), and his younger sister Samantha (Daveigh Chase).

Donnie is on medication for emotional issues and is seeing a therapist (Katherine Ross).  His teachers (Drew Barrymore – who executive produced, Noah Wyle, and Beth Grant) try to deal with him in different ways.  Grant’s character does it by trying to feed her class a steady diet of self help tapes made by a sleazy man she practically worships (Patrick Swayze).  Donnie’s sister Elizabeth has a boyfriend Frank (James Duval), and a new girl in town named Gretchen (Jena Malone) finds Donnie “weird” and therefore boyfriend material.  In addition, keep an eye out for quick appearances by Seth Rogen (in his film debut), Ashley Tisdale, and Fran Kranz (Cabin in the Woods).

Donnie has stopped taking his medication, and as a result he is sleepwalking.  One night he has a dream of a man in a bizarre rabbit suit (or is it a man?) who warns him that the world is going to end “in 28 days, 6 hours, 42 minutes, and 12 seconds”.  While this is happening, a jet engine falls onto Donnie’s house, right through his bedroom.  If he had not been sleepwalking he would have been killed.  The thing is, the FAA has no idea where the engine came from, since they have no record of a plane missing one.

As the 28 days go along Donnie continues to see visions of the strange bunny named Frank (note that that it is the same name as ’s boyfriend).  Donnie commits seemingly random acts of violence at Frank’s behest.  Frank continues to spout weird talk.  Is Frank real, part of Donnie’s psychosis, or something else entirely?  The answer might be “all of the above.”  At one point Donnie asks him, “Why are you wearing that stupid bunny suit?”  Frank’s response is to ask Donnie, “Why are you wearing that stupid man suit?”

That’s not my favorite quote from the movie, though.  The film is set in late 1988 when the election between George H.W. Bush and Michael Dukakis was going on.  Also big at the time was a TV “talent” show titled Star Search.  People watching the movie Donnie Darko today probably do not appreciate what Grant’s character’s obsession with placing a girls’ dance team on it says about the character.  It was the American Idol of the day, except even cheesier, if you can imagine such a thing.  Grant’s character is unable to travel with the team (named “Sparkle Motion”) to appear on Star Search and asks Mrs. Darko, whose daughter Samantha is on the team, to travel with them instead.  Mrs. Darko has never taken it that seriously and responds that she’s not sure.  Grant’s character responds in a hurt, semi-accusatory voice, “Sometimes I doubt your commitment to Sparkle Motion.”  That quote may not do anything for people who have not seen this movie, but for me I find it one of the funniest, strangest, and best movie quotes of all time.  It perfectly sums up the “off-kilterness” of this movie.

I will also mention that this film has some very good uses of music in it, especially the song that plays over the final montage in the film.  It is a cover of the Tears for Fears’ song Mad World.

A lot of people have spent a lot of time trying to interpret everything that happens in this movie.  I listened to writer/director Richard Kelly’s commentary track for the original version of the movie and I came to the conclusion that even he doesn’t understand it fully, mostly because he contradicts himself multiple times during the commentary.  He has also released a “director’s cut” which mostly just inserts back in the deleted scenes that appeared on the original DVD release.  While there is not a huge difference in overall quality, I prefer the original version.  There has also been a semi-sequel named “” released.  It follows the Samantha Darko character.  I have not seen it, so I cannot comment on it.  I can tell you that Richard Kelly had nothing to do with it, and that Darko fans seem to dislike it a lot.

You may have heard about Donnie Darko and have wondered what all the fuss was about.  If so, you should definitely check it out.  The movie may not be for everyone, but those people who do like it, like it a lot.  If you prefer your films to be grounded in reality, then this is not the movie for you.  For everyone else, especially those looking for something different, I highly recommend this film.