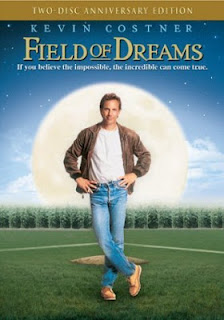 I’ve only ever known one person who hated Field of Dreams.  She’s also the only person I’ve ever known who hated The Princess Bride, so make of that what you will.  Her reason for hating Field of Dreams was two-fold: she didn’t like baseball, and she didn’t like how unrealistic the movie was.  I can understand the first reason, but I had to really fight to hide my laughter at the second reason.  Watching a movie where a disembodied voice tells a man to build a baseball field in the middle of his corn crop and expecting it to be “realistic” seems really bizarre to me.  Since then I’ve seen other disparaging comments about this film that also boil down to the fact that it’s unrealistic.  I am not one of those people who feel that way.  Not only do I like baseball, but I have a very personal connection to this film because of my relationship with my father and the fact that he passed away a few years before this film came out.  I will talk about that in this post (in a well-marked section that can be skipped by those who have not seen the film and want to avoid spoilers.)

I should acknowledge right up front that I know this movie is not perfect.  The time periods are off some because of adapting a book for the screen ten years too late.  The antagonists (woman who wants to ban a book, the brother-in-law who wants to sell the field) are two-dimensional.  And there are historical inaccuracies in regards to some of the ballplayers, especially “Shoeless” Joe Jackson shown hitting right-handed when he was a lefty.  None of these really matter to me in the overall scheme of things, though.  What matters is how the movie connected with me.

Ray Kinsella (Kevin Costner), his wife Annie (Amy Madigan), and daughter Karin (Gaby Hoffman) live on a farm in .  Ray and Annie have it mortgaged to the hilt and are barely getting by.  One day while in his corn field Ray hears a voice that says, “If you build it, he will come.”  (Not “If you build it, they will come” as so many people misquote nowadays, probably because it has become a marketing catchphrase.)

Ray thinks he’s hearing things – which he actually is – and he ignores it.  He hears it again, though, and sees a vision of a baseball field in the middle of his corn.  He doesn’t know why, but he feels compelled to make the vision true.  As Annie asks, “who will come?”  Ray doesn’t know.  She supports him, though, and he plows under part of his corn harvest.  No one appears, though, and he becomes the laughing stock of the area.

Annie’s brother Mark (Timothy Busfield) urges Ray to sell the farm to try to recoup some of his money.  Ray refuses.  Mark decides to take matters into his own hands and later in the film he has control of the mortgages Ray owes on the property and uses that to try to force Ray’s hand.

Before that, though, Ray goes out one evening and finds a man in a baseball uniform standing on the field.  He appears disoriented and doesn’t know where he is.  He introduces himself as Joe Jackson – a player whose history Ray is familiar with because of Ray’s father’s love for the team used to play for.  The movie explains who he is and how he came to be banned from the game of baseball.  The thing is, has been dead for many years.

Ray takes things in stride and welcomes “Shoeless Joe”.  says there are other players that he knows would like to come and asks Ray if that would be okay.  Ray says yes and over the next few days a number of players, all in old uniforms, appear on the field.  They arrive and leave by walking through the cornfield beyond the outfield grass.

One day Ray hears the voice again, but this time it leads him to look up legendary writer and recluse Terrence Mann (James Earl Jones).  (Any resemblance to legendary writer and recluse J.D. Salinger is completely intentional).  Ray drives to , finds Mann, and convinces him to go to a baseball game at historic .  Mann does, and while there both he and Ray get another instruction for them to look up a ballplayer named Moonlight Graham (Burt Lancaster).

Eventually everyone, including Mann and Graham, end up back at Ray’s farm.  The brother-in-law Mark is just about to seize control of the farm if Ray won’t come to his senses.  Here is where I will explain my personal connection to this film.  It contains spoilers for the end, so if you do not want to read them, please skip past this until you see the end of the spoiler section marked out.

Terrence Mann is invited to join the ballplayers when they leave the field and go wherever they end up going (a lot of people interpret it as heaven).  Ray finally loses his cool a little bit.  He’s done everything the voice has asked him to do, he’s almost ruined his family and lost his farm, others get rewarded, but he gets nothing?

Ray realizes that Shoeless Joe is still there.  says to Ray, “If you build it, he will come” – emphasizing to Ray the word he had overlooked.  moves aside and Ray sees one more ballplayer, in catcher’s gear, still on the field.  The player removes his mask and it is Ray’s father, who had passed away while the two were still estranged from each other.  It had been his father that had instilled the love of baseball in Ray and his biggest regret is not getting a chance to reconcile with him.  Choking up a little, he hesitantly asks his father if he wants to play catch.  He does and they do – both sharing their unspoken love for each other through their love for the game of baseball.

I’m man enough to admit that I started crying at this scene.  Part of it was happiness for Ray, but it was also something else.  You see, I had lost my father a few years before this film came out.  He wasn’t home a lot when I was little, but when he was the two of us would play catch with each other.  Despite the other bad things that were going on then, I had fond memories of those times I shared with my father.  When I saw this scene in the movie I ached to play catch with my dad one last time and I couldn’t.  The young adult I now was knew it would never happen, so the tears came.  To be completely honest, I’m getting a little misty-eyed now just reliving how I felt.

It wasn’t just me who connected with the film.  It was very popular with audiences and received a Best Picture Oscar nomination.  More than 20 years later the baseball field built for this movie is still there and thousands of people travel to every year to visit it.  This is all because of how the movie Field of Dreams affected them, too.

While I can intellectually acknowledge some areas of the film could have been better, because of the personal connection I have with this movie it is impossible for me to emotionally give this film anything less than five stars.  If you have any love for baseball, or for your father, then you must see this film.