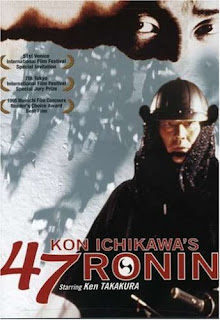 47 Ronin tells the classic Japanese tale of, you guessed it, the 47 ronin.  Just as the tales of King Arthur are known to pretty much every British citizen, so too is the tale of the 47 ronin known to all Japanese.  Like King Arthur, it is based on true historical events, although since they occurred much more recently, the story presented is more accurate than any of the King Arthur stories.  This movie is a good way for people to get familiar with the story ahead of the big 2012 blockbuster that is going to somehow include Keanu Reeves.
The movie 47 Ronin did not turn out to be what I expected.  It was directed by Kon Ichikawa, a legendary filmmaker in Japanese cinema.  He presented it in the style of the 1960s samurai movies that he was famous for, not in the style of the “less talking more action” martial arts movies that became prevalent in the 1970s and beyond.  This meant he focused on characterization, setting, cinematography, and presenting the fight scenes in a particular style.  There were no several minute long sword fights; most were over in a couple of swipes and a spurt of blood (which is actually more realistic).
I confess that I was also lost for a little while at the start of the movie.  While I was vaguely familiar with the story of the 47 ronin, I did not know it as well as the director was expecting the audience to know it.  This meant it took me longer to understand who all the players were in the rather large cast.  It’s the toughest in the first 15 minutes because the movie opens in the middle of the story and without knowing all the players yet I could only understand the general gist of the plot.  After this intro, the movie flashes back to the start of the story and proceeds forward from there.
Here is an overview of the story, not including the outcome:  In 1701 two daimyo (lords) were ordered to provide a fitting welcome for emissaries of the Emperor.  A man named Kira was sent to help them prepare.  Accounts differ as to what Kira may have actually done, but at a certain point one of the Lords (Asano) attacked Kira in the Shogun’s house.  This was a grave offense and was punishable by death.  Asano was given the “privilege” of committing seppuku (ritual suicide by stabbing yourself in the midsection) rather than be put to death.
The lands of Lord Asano were to be given away and all of his samurai were to become ronin – samurai with no master.  These samurai were very loyal to their former master and plotted revenge, even though they knew that it would mean their own deaths.  Though they did not know why their Lord had attacked Kira, they felt it had to have been for a good reason.  They waited for close to two years before they got their chance to attack Kira.  Much more, including spoilers, can be found here.

The movie does a great job of sidestepping what it was that Kira may have done to offend Asano, by presenting it from the point of view of the 47 ronin, who only received a couple of messages.  The few people who witnessed the attack all say that they do not know what prompted it.  Even Kira says he does not know why Asano attacked him.
The 47 ronin are led by Asano’s former chamberlain Oishi.  He coordinates them in their plotting against Kira.  Meanwhile, Kira is not stupid.  Even though it appears as if Asano’s men have complied with their orders he knows that they will attack him at some point.  He hires a man named Irobe to be in charge of his protection and defense.  Both Oishi and Irobe are very intelligent and there is a great scene where the two meet face to face for a brief talk.
As someone not raised on this tale, I have to say that I probably had a different take on it than someone who was.  I saw the 47 ronin almost as the villains of the story, not the heroes.  They are plotting to kill a man because their master tried to kill him and failed.  There is no thought on their part that Kira might have been innocent.  (The movie leaves this ambiguous.  The stories handed down have turned Kira into a rude man who constantly gave offense to Asano until the attack was warranted because of the offenses.)  Even though they acknowledge that their lord committed a grave sin by doing this, they value their loyalty to him over everything else.  The loyalty is what I believe resonates with the Japanese people more than the revenge.
This is not an action packed kind of movie.  It is more a thinking man’s movie about the plotting and counter-plotting that was going on.  Oishi and his men start a whispering campaign to malign Kira’s reputation in order to force him out of his well-defended home in the center of the city to a place on the outskirts.  They are successful, but Irobe still builds Kira an impressively fortified new home.  Oishi’s men get some of the plans for the compound, but as it turns out, Irobe has managed to trick them by leaving out some key things.  The majority of the fighting only occurs at the end of the movie where we see the attack on the compound.
Note – for a bit of fun, make sure to read the section in the DVD extras on “combat catering.”
This movie would probably be enjoyed by those that are at least passingly familiar with the samurai and their code of honor.  For those people, give this movie a try and you might like it.  For people who have never watched a movie like this before, it could be tough for you to follow everything that is going on.
Chip’s Rating: 3 out of 5 stars
[Note – you can see all the Movies by Numbers, as well as get some hints on what’s to come, at this link.]