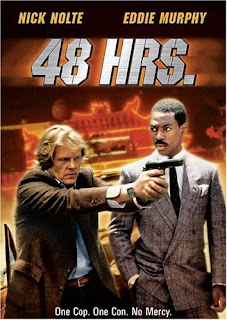 The movie 48 Hrs. is sometimes credited with kicking off the whole “buddy cop” genre.  Even if it wasn’t the first, it was certainly followed by a ton of others (i.e. Lethal Weapon, Bad Boys, Rush Hour – all of which became a series of movies.)  There was even a sequel to this movie titled Another 48 Hrs.  Regardless of whether 48 Hrs. was first or not, it certainly was popular with both audiences and critics.  It also made Eddie Murphy a star in his very first movie role.
The premise of the movie is that a cop and a felon have to team up to catch a bad guy.  They clash while doing it.  That’s it.  It’s a pretty simple formula, but it was very effective.
The movie opens with a work gang of prisoners out on a road.  A pickup truck pulls up and the driver asks for some water.  He gets into a fight with one of the felons – Albert Ganz played by James Remar (The Warriors).  It turns out to be staged, the driver hands Ganz a gun, and they shoot their way to a successful escape.
We meet cop Jack Cates (Nick Nolte) as he and a couple of others are looking into a credit card theft.  They are going up to the room that the card was used for.  The man using the stolen credit card shoots the other two cops and gets away.  It turns out that it was Ganz.
In order to find out where Ganz might go next, Cates decides to go find an old partner of Ganz – Reggie Hammond, played by Eddie Murphy.  There’s just one problem; is in prison.  He got sent there after he and Ganz had a falling out three years prior and he got caught.
Murphy had one of the great first screen appearances.  As Cates is walking through the prison to ’s cell, we can hear someone loudly singing Roxanne by The Police (or should I say “Roxxxxxxxxxaaaaaannnne”).  Of course, it turns out to be .
He’s none too happy to be visited by a cop, let alone a white one.  He’s got six months left in prison and the last thing he wants is to make his situation worse.  When Cates tells that he’s going after Ganz, though, changes his attitude some.  Cates agrees to get released on a 48 hour pass (hence the title) in order to help him track down Ganz.
What follows are a bunch of scenes that are ostensibly about the two of them finding Ganz, but that are really about letting the two stars play off each other.  Nolte is, of course, tough and irascible.  Murphy is, of course, funny and brash.  A lot of the humor comes from the two of them getting on each other’s nerves.  The best scene in the movie is when Cates takes to a redneck bar.  When they walk in and every person is the bar stares at in an unfriendly way, he just observes, “Not too popular with the brothers in here.”  He gets the final say, though, in a very funny way.
I mentioned that this movie made Murphy a star.  He had gotten some notice for being on Saturday Night Live, but it was really this movie that brought him to the consciousness of the general person on the street.  He followed this movie with Trading Places in 1983 and then Beverly Hills Cop in 1984, which really put him at the top of .
Perhaps you read “Eddie Murphy” and decided right then that you weren’t going to watch this.  Well, you might want to re-think that.  This isn’t one of the crappy comedies that he’s churned out in recent years.  This is a young Murphy who is mostly concerned with making people laugh.  Nolte has said that a lot of the dialogue between him and Murphy was adlibbed.  If so, it resulted in many funny, quotable lines.
If you like comedies, and especially buddy cop comedies, then you should definitely give this movie a try.  You will probably like it.  If you don’t like offensive language, then you may want to give this one a pass.
Chip’s Rating: 3 out of 5 stars
[Note – you can see all the Movies by Numbers, as well as get some hints on what’s to come, at this link.]