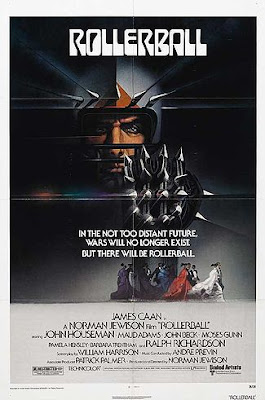 Steve Honeywell at 1001plus and I agreed to continue to do a monthly review of a film the other picked for us.  We did 12 in 2015 and we will do 12 more in 2016.  The second one this year is Rollerball – the original version from 1975, not the 2002 remake.  It’s also on the list of the 101 Sci-Fi Movies You Must See Before You Die, and I am slowly working on those entries.  I saw the remake of Rollerball back when it came to DVD and I honestly can remember nothing about it other than it had Rebecca Romijn and LL Cool J in it, so I will not be comparing/contrasting the two films in this post.


The original movie stars James Caan as Jonathan E – the star of a sports team based in that plays an ultraviolent game know as rollerball.  The movie is set some time in the future and corporations run the world.  Rollerball (the sport) is designed to distract and entertain the masses – sort of a bread and circuses approach.

Jonathan’s team is owned by Bartholomew (John Houseman), a man so far out of his element in the violent world of rollerball that at first he seems miscast.  As the film goes on, though, it becomes apparent that he’s not really doing this by choice, but he is himself also a pawn of the corporations, ordered to build and run the team.

The movie opens and closes with several minutes of “game footage” of Jonathan’s team battling others.  There are also a couple more rollerball games shown during the film.  The sport is played by men on roller skates and motorcycles.  The action is a combination of the popular-at-the-time-the-film-was-made Roller Derby and the sport of Jai Alai.  A heavy metal ball is sent spinning on a circular, ramped track and two teams compete first for possession of the ball, then to put the ball into a single small receptacle above the track.  Pretty much anything goes in regards to accomplishing this, from knocking competitors out to running over them with the motorcycles.  Death is a common occurrence.

And Jonathan is not just the star of his team; he’s also the face of the entire sport.  He’s somehow not only survived a game with a high mortality rate for more than a decade, he has thrived.  Fans all around the world love him.  And that’s a problem for the corporations.  They want the sport to subconsciously demonstrate to the masses the futility of continuing to fight for whatever is important to them.  But how can it do that if this one man continues to win?

The corporations decide to put a stop to him.  They control people’s lives and the only complaint Jonathan has early in the film is that they took his wife away from him and gave her to a corporate bigwig.  When the owner tells him that he is to announce he (Jonathan) is retiring, though, he finally starts to ask questions.  He wants to know why.  He wants to know who made the decision.  And he refuses to make the announcement, putting the owner in a very bad position since he can’t control his player.

Like most science fiction movies certain elements don’t age well.  Case in point with Rollerball is that the only way Jonathan can get answers is to physically travel to Switzerland to visit the one computer in the world that is able to hold all books in it.  He does so in what is the most bizarre scene in the film, with the computer’s operator berating it for not answering.  I think this was an attempt on director Norman Jewison’s part to say that we shouldn’t trust computers, but it just comes across as really silly.

In fact, I read afterwards that Jewison’s overall intent with this movie was to be anti-violence and that the rollerball scenes in the movie were intended to horrify people.  It turns out he failed spectacularly because not only did the cast and crew play the sport during down time, the film was shot in West Germany and used extras from there who fell in love with the “sport” and there was serious talk about setting up a league there.

I tend to agree with those people; I found the rollerball scenes to be the most entertaining ones in the movie.  The other scenes ranged from okay to kind of slow.  The movie could have been 15-20 minutes shorter and benefited from it.  (It’s over 2 hours long.)

And while Caan is good in other movies I didn’t think he took the right approach here.  He appeared to be going for “dumb jock” in his tone of voice and mannerisms, but he was so soft-spoken that it contrasted too much with his violent, loud personality during the action scenes (where he looked a lot more comfortable).  Overall, the movie came across as a bit schizophrenic in its approach to me, and I would say the same thing about the star.

One other thing that happened is about 10 minutes from the end I suddenly realized that I had seen the final shot of the movie.  I don’t know where from, maybe a special on science fiction films, or maybe even in the extras on the DVD of the remake, but it spoiled any suspense for me in the final kill-or-be-killed ending.

Since I like science fiction this is a film that I’ve been aware of for a long time, but for whatever reason I never got around to watching it.  I sent Steve a consolidated list of films I have not seen from various movie lists I may do someday.  I asked him to pick from those, when possible, so this was one Steve chose to honor my request.  I pushed him into it and the result is a movie that I liked parts of, but didn’t like others.  Overall it balances out to an okay movie, but not one that is quite good enough for me to recommend to others.  Sorry Steve.